Celebrity voices in Google Assistant were billed from day one as only being available for a limited time. They can respond to a subset of popular queries, like asking for a forecast and other everyday questions. Over time, their capability expanded to encompass more commands.

Google last year did not specify a time frame and the March 23 date comes just shy of a year (April 3). Celebrity voices have been a top request for Assistant and fit into the company’s goal to get “accents, languages, and dialects right globally.” Also disappearing are Legend-specific easter eggs like “Serenade me,” “Sing Happy Birthday,” and “Do you know Chrissy Teigen?”

Issa Rae’s cameo — introduced in October — should still be available after the first removal. These voices are generated using WaveNet text-to-speech from DeepMind that allows more natural-sounding output with shorter recording sessions for actors. 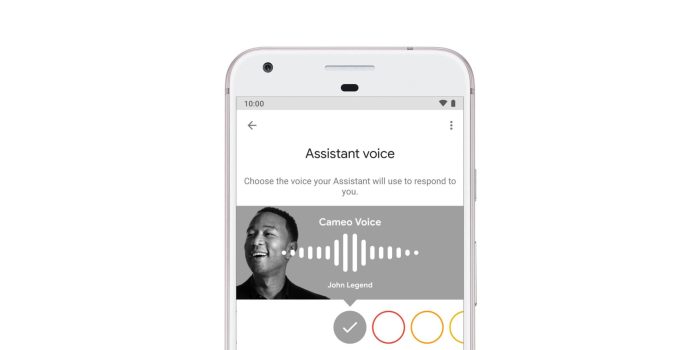 All other responses are handled by the ten regular Assistant voices. To enable, users can still say “Hey Google, talk like a Legend,” or manually open the “Assistant voice” menu in Assistant Settings. The John Legend Cameo Voice features a star and includes a cover of the musician.

All devices with Assistant set to US English can access the voice, including Google Home speakers, Smart Displays, iOS, and Android.