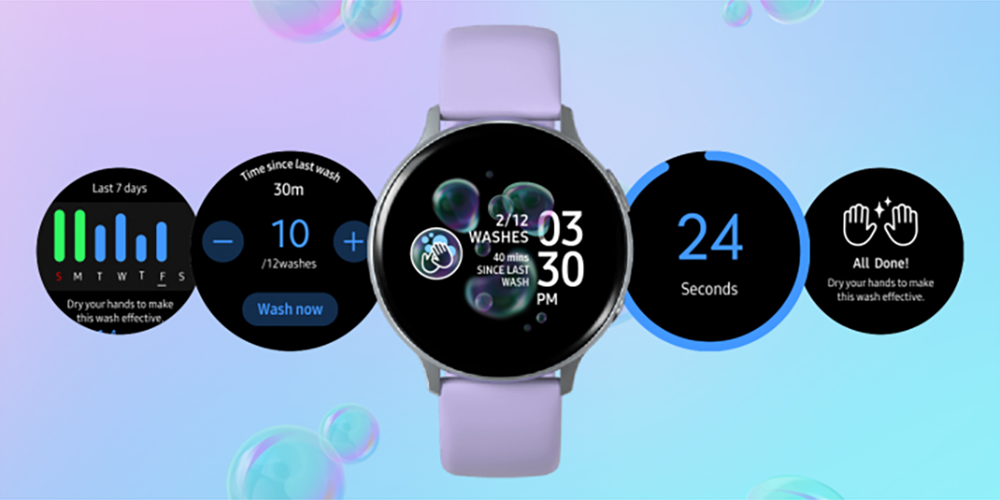 Following the example of Google’s Wear OS, Samsung has just added a new “Hand Wash” timer to its collection of Galaxy smartwatches as the folks at SamMobile spotted.

A new tool called “Hand Wash” was developed for smartwatches by Samsung’s team in Bangalore in just a couple of weeks with developers working entirely remotely.

To make things easy, a small group of designers and developers from Samsung Research Institute-Bangalore, or SRI-B’s UX and wearable teams, worked round-the-clock over the last two weeks to come up with a solution that helps you keep healthy and safe.

The app is designed to help users wash their hands for at least 25 seconds in accordance with recommendations from the World Health Organization. This is a bit short of the 40 seconds Google has been using with its timer, but 25 seconds is still enough time to kill the viruses as long as you’re using soap. The app gives haptic feedback during the first 5 seconds that are designed to let you turn on the water and apply soap.

“Hand Wash” sends reminders on Samsung’s Galaxy smartwatches several times through the day and also tracks how many times you’ve actually used the timer throughout the week.

Samsung has only officially announced this app in India, but we’ve been able to confirm the app is also live for Galaxy Watch/Active owners in the United States. Unlike the handwashing timer on Wear OS smartwatches, you’ll need to manually install this.