As Sony struggles to maintain any sort of foothold in the smartphone market, it’s probably some sort of good news that the Xperia II has opened for pre-orders in the US.

Online retailer B&H Photo has now listed the latest Sony flagship device with a substantial $1,198 start price for the 5G-enabled handset. However, the site has since removed pricing, and the Xperia II has returned to “notify when available” on the store listing (via XperiaBlog). This is a little confusing, as upon announcement, Sony suggested that the Xperia II would be a 4G-only device, so it could simply have been a mistake — hence the price removal.

[Update 05/25]: Sony has officially confirmed that the Xperia 1 II is set to come to the US on July 24. The impressively stacked smartphone will also come with a free pair of the noise-canceling WF-1000XM3 wireless earbuds too — making the $1,200 entry-price that bit more palatable. However, those hoping to get the device will have a little longer to wait. 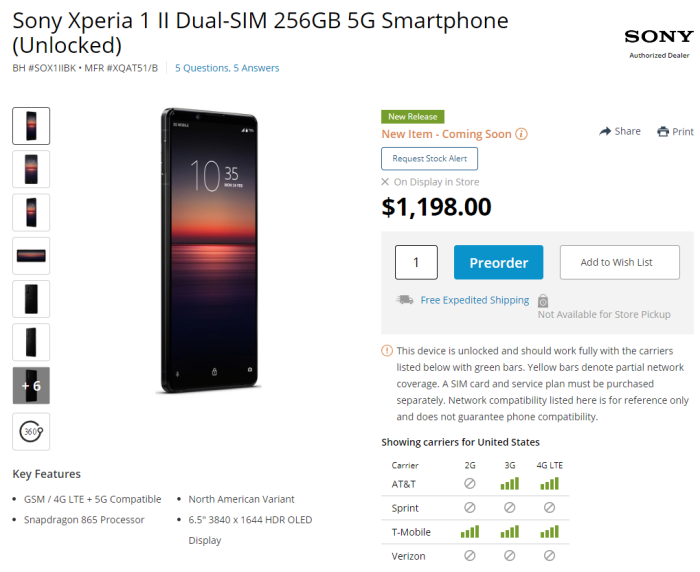 Some have also suggested that pre-orders are officially set to open on June 1, so this may have been a scheduling error from B&H, hence the retraction of pricing from the listing. Whatever the reasoning, it’s clear that Sony is going for broke with the Xperia II, especially with pre-orders opening at $1,189. Although on paper it stacks up against the competition quite well. That entry will net you the Qualcomm Snapdragon 865 chipset, 8GB of RAM, and 256GB of internal storage.

There’s still no word on when the Xperia 10 II might hit the market, but pricing is expected to be exponentially lower than the flagship Xperia I. What do you think of the pricing of the Xperia II? Has Sony dropped the ball? Or are you looking to pick one up? Let us know down in the comments section below.