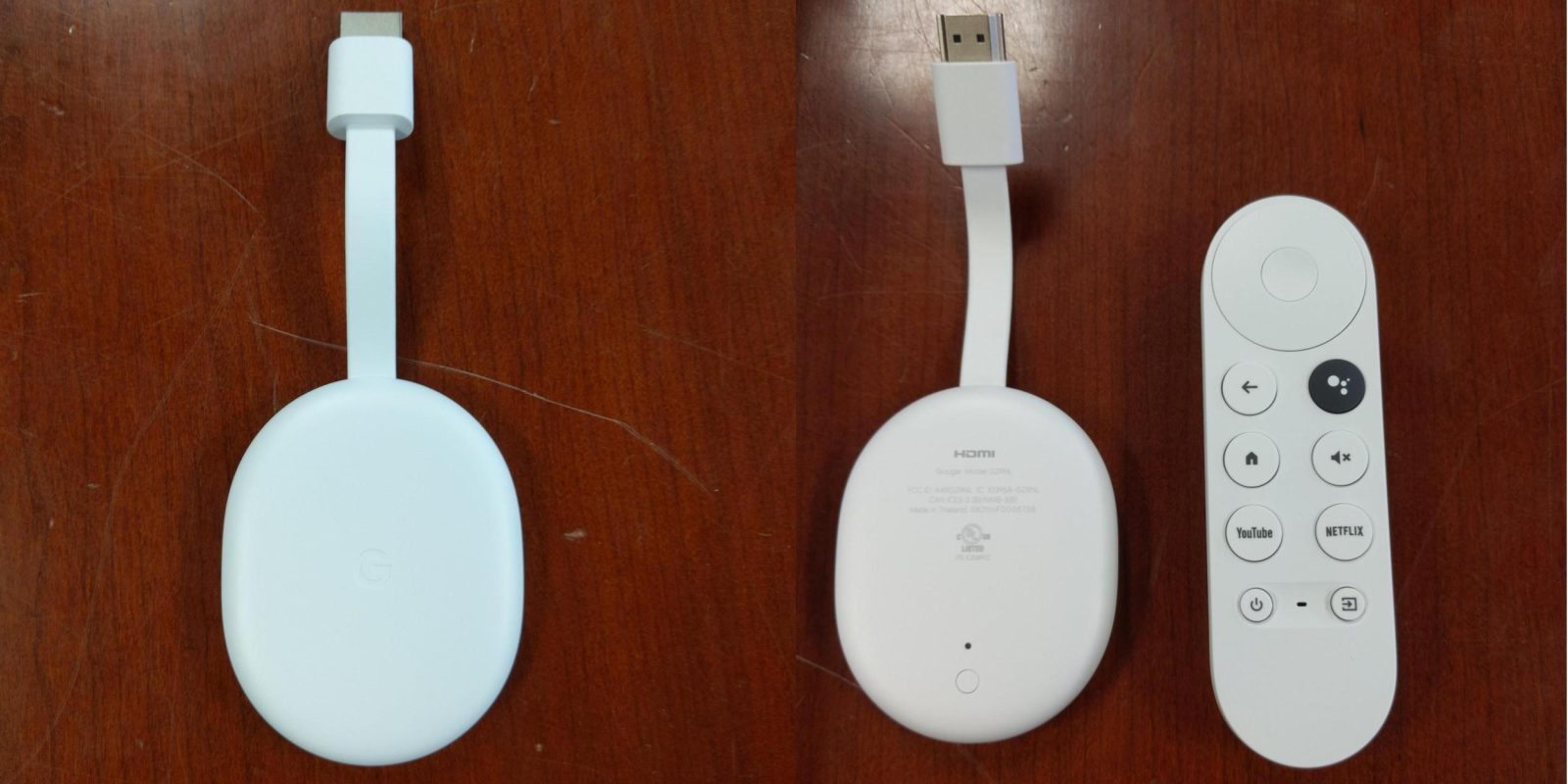 After the retail packaging was revealed last night, the Chromecast with Google TV has been unboxed. We get a very good and up-close look at the device just under a week before the September 30 announcement.

From another source on Reddit, we see the new “Google Chromecast” in a stark “Snow” that encompasses the oval shell, which has a center “G” logo, and HDMI cable. The rear has various regulatory markings that confirm the GZRNL model, FCC ID, serial number, and “Made in Thailand” nature. There is an indicator light above a button that presumably helps reset the dongle.

This unboxing shows that a USB-C to USB-A cable and power adapter, which looks identical to the Stadia Controller’s, is also included with the Google TV Chromecast. Unlike the Ultra, the plug does not incorporate an Ethernet cable, but the USB-C nature should mean any hub/adapter will work. Google could also be offering a first-party version as an add-on.

Lastly, two AAA batteries are included for the “Voice Remote,” which is curved for an ideal hand feel. There is a dimple on the bottom-half to slide off the cover.

Also in “Snow,” there’s a circular navigation d-pad on top with center “select” button. This is followed by Back, Google Assistant, Home, Mute, YouTube, and Netflix. An indent at the bottom houses two keys for “TV power” and “TV input.” In between is a microphone cutout, while underneath is an LED that is “Solid when microphone is activated.”

This device is rumored to cost $49 and come in two other colors. The revamped Google TV interface — which also has a new logo — was revealed this morning in a separate leak.

Update: This Chromecast with Google TV has been set-up to reveal that it’s running Android 10 out of the box and has 8GB of storage, though only 4.4GB are free to users.

Update 2: The latest from u/fuzztub07 is the set-up process and several insights about the Chromecast Voice Remote, which is initially synced by pressing down Back + Home and can be used to control TV volume, power, and input via CEC.

There is a day one update for both the Chromecast and the controller, while we also get a video walkthrough:

Meanwhile, “Apps” — like “Movies” and “Shows” — is more of a store directory, though there is a carousel of “Your apps.” We get a look at Gboard TV, which floats at the bottom center of the screen instead of spanning the entire width.

The Library tab shows content that you’ve purchased, recent, or watchlisted. Lastly, we get a look at settings.

Update 3: We now know what’s powering this Google Chromecast thanks to u/fuzztub07 installing AIDA64. There is a quad-core Amlogic CPU clocked at up to 1.9GHz paired with 2GB of RAM. Given the presence of Cortex-A55 cores, this is not the S905X2 (A53). Rather, it is the S905X3, which has slight performance improvements over its predecessor.