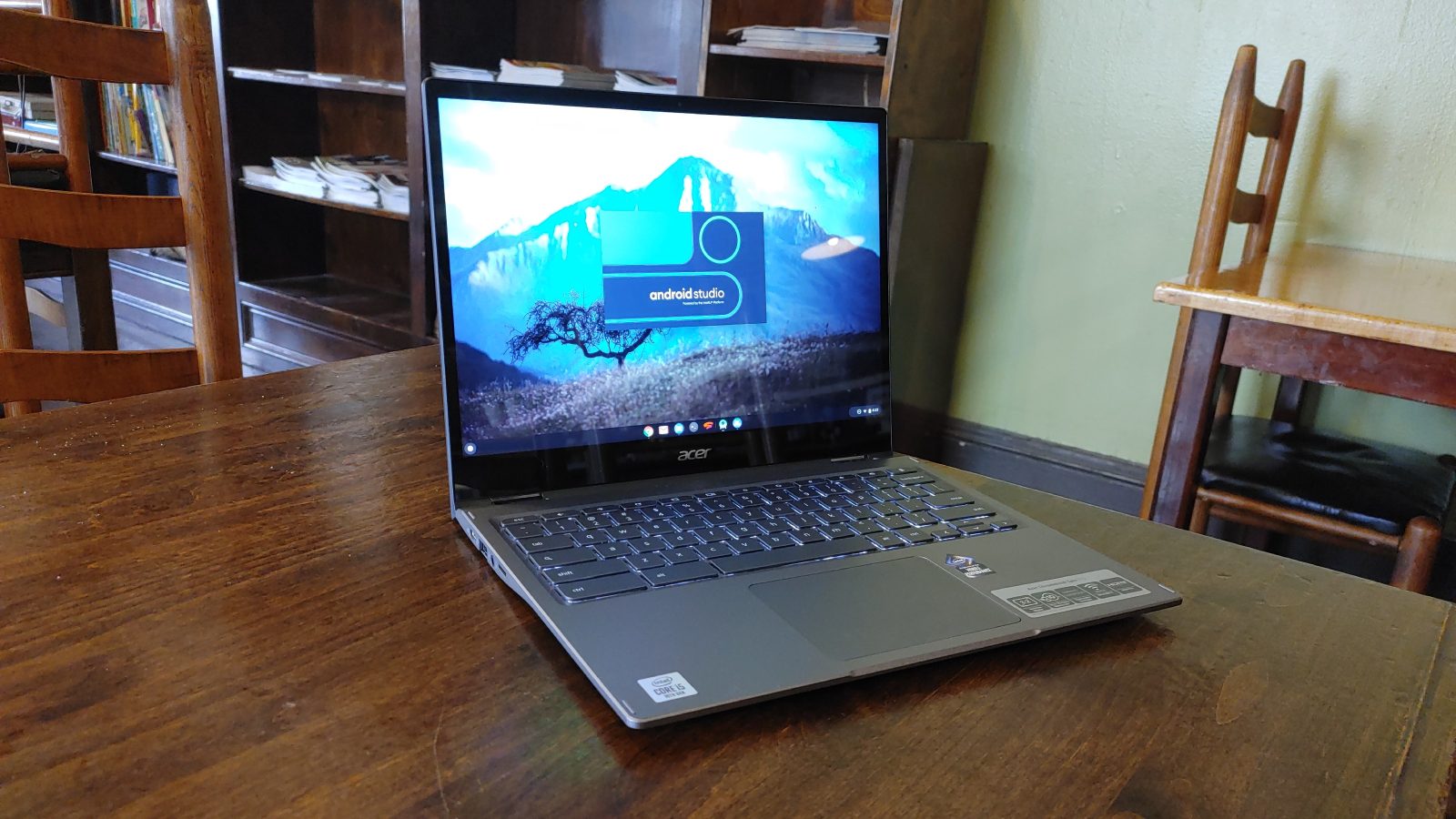 Over the last few years, Chromebooks have become useful to more than just students. Thanks to support for Android and Linux apps, Chromebooks are great for productivity and even app development. Now Chromebook makers are rising to meet the needs of power users and developers, and the Acer Spin 713 is one of the best and most affordable high-performance Chrome OS devices.

When you think of what makes a computer high-performance, there’s actually quite a few factors that come into play. Most folks know that a newer, better processor helps you do things faster, and on that front the Acer Chromebook Spin 713 packs the latest U-series — meaning fan-cooled, laptop-grade —10th Gen Intel Core i5. Beyond that, the Spin 713 packs most of the high-end Chromebook specs you could ask for including 8GB of RAM and support for WiFi 6 — which should give you a minor internet speed boost in the long run.

What sets this Chromebook apart, especially from other devices in its price bracket, is the inclusion of a proper NVMe solid state drive. Most Chromebooks use an eMMC for storage, which is essentially an internal SD card. The average person just browsing the internet likely won’t notice the difference, but developers, who end up reading and writing thousands of files at a time when compiling their app, should see an improvement.

Despite being a well-specced Chromebook, the Acer Chromebook Spin 713 also manages to have fantastic battery life. Acer claims about 10 hours on the battery, and this feels about right. I can make it through playing D&D with friends on Friday, doing some browsing on Saturday and Sunday, and still have some battery life left over by Monday morning.

To give a better idea of the difference, I’ve taken time to do some benchmarks and some developer-related tasks on both the Acer Chromebook Spin 713 and my daily driver the Lenovo Yoga Chromebook C630 (8th Gen Intel Core i5 & eMMC storage). First up, we’ve got GeekBench 5, where the Spin 713 regularly scores about 1000 on single core and 3500 on multi core, versus around 850 and 2750 on the Yoga.

For the second benchmark, I used AndroBench to give a better idea of the difference in speed between eMMC storage and a proper NVMe solid state drive. Here, we can see that in almost every category, the Spin 713 has a significant advantage over the eMMC storage used in most Chromebooks.

Finally, I did some — admittedly arbitrary — tasks to put the network and storage speeds to a closer to “real-world” test. On each device, I cloned a large code repository from GitHub, specifically the Linux kernel source code. Then I built an example Android app using the Flutter SDK on each device.

Surprisingly, in both of these tests, the two Chromebooks, despite being two years apart, were surprisingly close. In fact, the Yoga was actually measurably faster in downloading files over Wi-Fi, which surprised me given the Spin 713’s newer, more capable wireless chip.

The main conclusion I drew from all of this is that the real-world speed difference between recent generations of high-end Chromebooks is still surprisingly negligible. In spite of this, I can’t deny that the Acer Chromebook Spin 713 still feels faster in everyday usage.

While specs are of course important, the look and feel of a laptop cannot be forgotten about. The Acer Chromebook Spin 713 takes a fairly traditional route with its combination aluminum and plastic chassis. Around the sides of the lid, you’ll find beveled edges to the aluminum, all shined to a polish, giving the device a pleasantly refined look.

The front half of the laptop maintains a sleek, slim profile, while the back half gets a bit thicker to accommodate an assortment of ports. Over on the left, you’ve got a full-size USB port, a USB-C port, a 3.5mm headphone jack, and a microSD card slot. On the right-hand side, you’ll find the power button, a second USB-C port, a full-size HDMI port, and a volume rocker.

More importantly, when you open it up, you’ll see Acer has kept the Spin series’ 3:2 ratio display, as made famous in the Chrome OS world by the Google Pixelbook. This taller aspect ratio is a fan favorite especially for web browsing as you’re able to squeeze more content on screen vertically, rather than horizontally.

Conversely, this shape can make side-by-side multitasking — something I do quite often, as a developer — just a bit more cramped. Overall though, the display ratio is a matter of preference, and I’m probably in the minority for preferring 16:9 on a laptop.

The display itself is a 13.5”, 2256×1504 resolution touchscreen, which is a great size and shape for using the Spin 713 in tablet mode. Unfortunately, the hinge does not always play nicely with that. When in tablet mode, the weight of the top half is enough for the convertible to come unfolded at some angles.

On a side note, the Acer Spin 713 has the brightest display I’ve personally seen on a Chromebook, by a significant margin. Unfortunately, I haven’t had much of an excuse to use it outside to see how much that increased brightness helps when used in sunlight.

Down below the display, you’ll find the backlit keyboard as well as the touchpad. Having used more than my share of Chromebooks and their keyboards, I felt immediately at home on the Acer Spin 713. The keys themselves feel secure, well spaced, and don’t need too deep of a press. While there’s nothing special about this keyboard, there’s also nothing wrong with it, either, which is sadly a high bar these days.

Should you buy the Acer Chromebook Spin 713?

All in all, the Acer Spin 713 makes a compelling package, especially for developers who may turn to Chrome OS for its ease of web and Android development. What really sweetens the deal, though, is the pricing. The exact model I was given the chance to review — Core i5, 8GB of RAM, and 128GB of NVMe solid state storage — retails for just $629. While higher models exist — one offering double the RAM and storage and another bringing an Intel Core i7 and 16GB of RAM — they’re simply not as good of a value.

The price to performance ratio alone makes this Chromebook a must-have for any Chrome OS power user or developer. Add in the comfortable keyboard and fan-favorite 3:2 display ratio, and you’ve got arguably one of the best high-performance Chromebooks ever released.

You can buy the Acer Chromebook Spin 713 from Amazon, Best Buy, or direct from Acer.