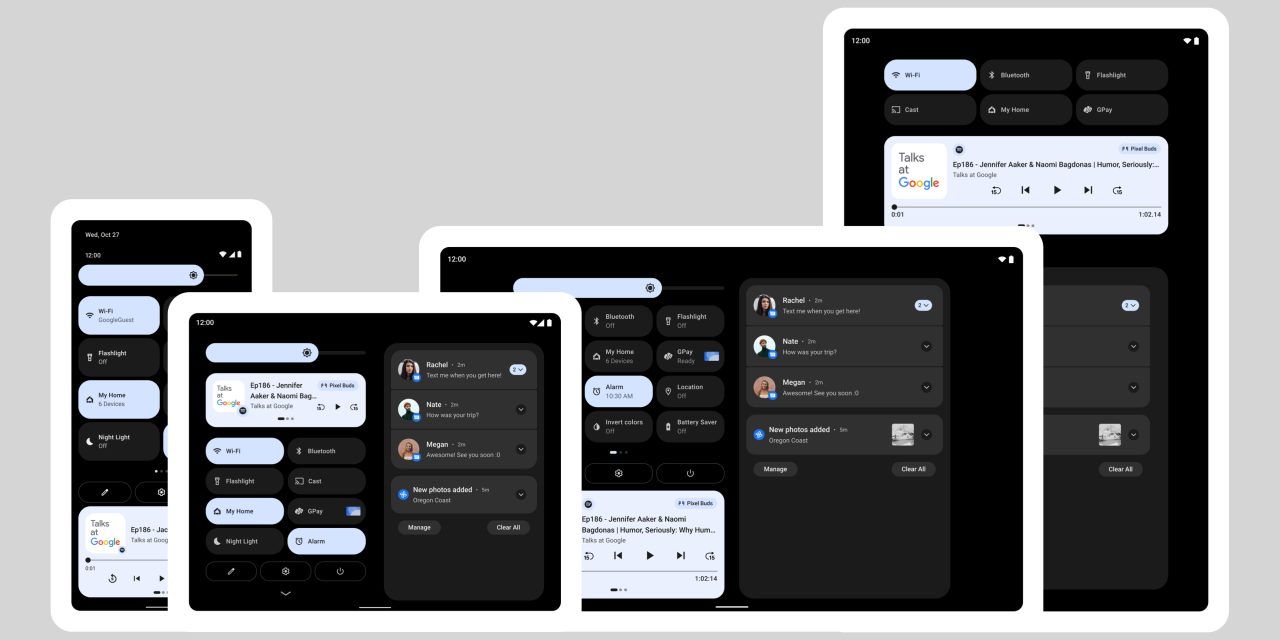 Android 12’s public rollout (for Pixel phones) started last week and that normally serves as the operating system’s big release for the year. In 2021, Google is doing something different and announced “Android 12L” for foldables, tablets, and Chrome OS today.

For the past few years, Google has operated a developer preview (and later Beta Program) that opens early in the year and closes with the public fall release, while Android – since 2018 – has only seen one annual version (e.g. 9 -> 10) jump. In recent weeks, signs emerged that Google was planning a mid-cycle update to Android 12 that harkens back to .1 releases in 2016 and 2017.

Google made that development official at the 2021 Android Dev Summit today with “Android 12L.” This “feature drop that makes Android 12 even better on large screens” comes as there are over 250 million tablets, foldables, and Chrome OS devices running the OS.

The “feature drop” parlance comes from the Pixel team, and starts with the Android 12L user interface being optimized for larger screens. This includes a two-column layout for the Lockscreen where the time appears first and notifications next. The Notification Shade swaps out the left screen for Quick Settings that have been tweaked in various ways from what’s live today. Depending on the screen size, the media player can appear at the top with a three-column layout.

Besides the underlying UI, Google says “system apps are also optimized.” Other changes, which enable on screens above 600dp, visible from images released today include:

The next focus of Android 12L is to make “multitasking more powerful and intuitive.” Large screens get a new taskbar that makes app switching seamless, while the split-screen mode lets you drag-and-drop to view application side-by-side.

To make split-screen mode a better experience in Android 12 and later, we’re helping users by automatically enabling all apps to enter split screen mode, regardless whether the apps are resizable.

Compatibility is the last Android 12L tentpole with “visual and stability improvements to offer a better letterboxing experience for users and help apps look better” without additional development work. That said, developers are encouraged to test apps across multiple screen and window sizes.

We’ve made letterboxing easily customizable by device manufacturers, who can now set custom letterbox colors or treatments, adjust the position of the inset window, apply custom rounded corners, and more.

There are new APIs that cover drag-and-drop for accessibility, as well as spatial audio. All this is part of a new API level (31 -> 32), but developers aren’t currently required to target it to meet Play Store requirements.

We’ve been careful not to introduce any breaking changes for your apps, so we won’t require apps to target 12L to meet Google Play requirements.

Android 12L is launching “early next year” on the “next wave of Android 12 tablets and foldables.” Google is working with “OEM partners to bring these features to their large screen devices,” with an Android 12L developer preview “coming soon” for the Lenovo P12 Pro, a 12.6-inch OLED (120Hz) tablet powered by the Snapdragon 870 with 6 or 8GB of RAM.

Until then, Google is releasing 12L Android Emulator system images today for app developers to preview all the changes. The immediate focus is on tablets, Chrome OS devices, and foldables, but 12L will also be available for phones, and an Android Beta (around December) will be available for Pixel devices.