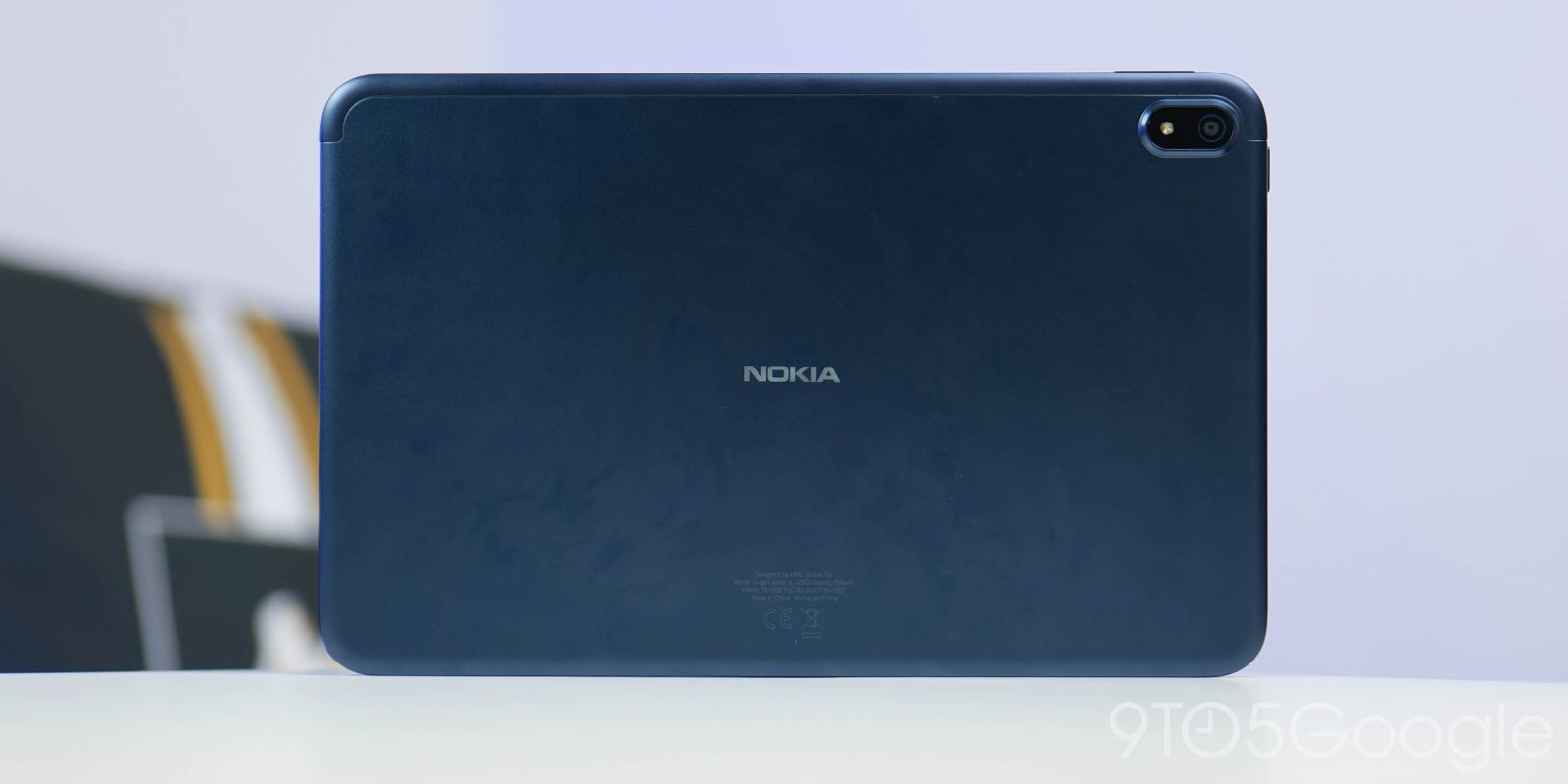 The world of affordable Android tablets is one fraught with problematic performance and poor build quality. That isn’t often a problem when all you want is a video viewing machine, but while the Nokia T20 tablet is firmly at the affordable end of the spectrum, it’s a solid option.

While smartphone screens enlarge, you’re probably wondering why you’d ever want or need a tablet. Why squint and strain your eyes while trying to enjoy some of the best TV shows and movies on the various streaming platforms?

If you are looking for a portable screen with a few other features thrown in, a cheap Android tablet could be a tempting solution – especially if you don’t like the idea of iPadOS.

My first thought when taking the Nokia T20 out of the box was that $250 tablets shouldn’t feel or look this good, surely? I’m shocked at how good the fit and finish is for that entry-pricing. The rough-but-smooth texture of the aluminum unibody feels great and looks equally impressive in the Deep Ocean blue colorway. There’s a reassuring heft and little to no body flex – something I definitely associate with cheap tablets across the entire spectrum of Android.

While the front of the chassis has been influenced by the iPad, the soft contours and flat edges have the T20 sitting somewhere in-between. There’s a single USB-C port at the bottom which is flanked by an outward firing speaker, while the top bezel hosts a 3.5mm headphone port at one corner and another outward-firing speaker.

The speaker sound profile is fine, if a little flat. It’s quite annoying that sound is fired away from you into your surroundings, as front-facing speakers would certainly help on a tablet with such large bezels. The 3.5mm headphone port is in a weird position. When in landscape mode, plugged headphones start to get in the way.

Other hardware buttons are in fairly familiar positions, while the solo rear camera sits in the upper left corner and is adequate for a package such as this. At eight-megapixels, be under no illusion that this is simply there to make up the numbers. The five-megapixel selfie camera will also be fine for Google Duo calls or maybe sporadic conference calls, but beyond that, the camera setup is, well, there if you need it.

The sole reason to buy the Nokia T20 beyond the impressive fit and finish is the display. It’s simply gorgeous for such a cheap piece of tech. Is it the best you’ll lay eyes upon? No, but it does almost every bit of video content you’ll consume more than enough justice to be a worthwhile endeavor.

It’s far from a perfect display, but it’s fairly bright vibrant, has fairly good viewing angles, albeit with a slight off-axis color shift, uniform bezels, and it has a 2,000 x 1,200 resolution – which is not technically “2K” as HMD Global would have you believe.

I did find that even in overcast Britain, outdoor viewing was a difficult process as the glossy LCD picks up fingerprints with consummate ease, while the auto-brightness felt out of sync with the conditions at hand. Indoors it was a different story once I set the brightness controls to manual and stuck around the 75% level.

In reality, this is just slightly more than 1080p, but it means that when setting content to stream at slightly higher resolutions on compatible services, things look especially crisp. The downside here, though, is that YouTube does not let you stream on the Nokia T20 at above 1080p resolution.

A powerhouse portable office the Nokia T20 is not. The Unisoc Tiger T610 processor hinders the otherwise stellar package with stutters, hangs, and lag sometimes becoming a little more than an annoyance. That could be considered overzealous, as this is a tablet after all and a sub-$300 one at that. Things could be faster, but they are about what I expected and so long as you’re not trying to run mountains of apps concurrently or multi-tasking as you would on a desktop or laptop, things are a-okay.

One saving grace is that Nokia has opted to keep things as close to the Android One builds, and my own tablet is running the November 2021 security patch. There is little to no bloat, although on my review unit Netflix and ExpressVPN were pre-installed.

Diving into the Google Entertainment space and the Nokia T20 is in its element. It’s entertainment front-and-center, and it’s here where you should spend the majority of your time in my opinion. If you have little knowledge of Entertainment Space, this replaces the Google Discover Feed and mimics the familiar Android TV interface. Plugin your favorite content providers and it works in much the same way with TV, movie, game, and e-book suggestions.

I kept things simple and didn’t move away from the standard suite of streaming services such as Netflix, Amazon Prime Video, and YouTube. For gaming, I tried to play some Call of Duty: Mobile, but found it wasn’t particularly great thanks to extended loading screens and not being able to play at the highest graphical settings.

With my growing horde of cloud gaming apps that include Stadia, GeForce Now, and Game Pass, I had a blast. This is one area where a high-resolution secondary screen shines. Playing through Cyberpunk 2077 on Stadia, Guardians of the Galaxy on GeForce Now, or Forza Horizon on Xbox Game Pass and I’m lost in the experience thanks to the Nokia T20.

Many of the issues relate more to the severely lacking Android tablet app library. A lot of apps still run as scaled smartphone apps, but at least they work. If you can deal with stretched interfaces, then this simply won’t be a problem.

HMD Global has promised two years of updates with three years of regular security patches, which on paper sounds great, but the firm hasn’t been so great at keeping those promises with previous Nokia releases. At the risk of being an apologist, updates are less important on a tablet such as this but important nonetheless, and we can only take this at face value at this stage in the product lifecycle.

Nokia has also added software-based Face Unlock for the sole biometric security access method on this tablet. In my experience, it has been fairly good but can be a little slow to recognize when I’m in front of the centrally-placed selfie camera. Personally, I would have preferred a power button fingerprint scanner, but this is better than nothing at all.

I found that the 8,200mAh tucked neatly inside the Nokia T20 equated to an all-day lifespan, but I have to admit that it didn’t quite blow me away as I thought it would prior to spending an extended period with it.

In most cases, I would hit the charger every three days, with my primary use coming from cloud gaming and sporadic web browsing. At no point did I worry about running out of juice, but when I did charge from under the 10% barrier, it took almost two and a half hours to charge with my 30W Google charger.

My initial thought is that this should be enough to keep someone occupied long enough to binge-watch the entire Lord of the Rings trilogy with a little room to spare.

There are some pieces of technology that need to meet certain criteria to be deemed “worth it.” In the case of an Android tablet, for most people, good battery life and a decent screen are important areas. In my opinion, the Nokia T20 tablet excels in those two key areas but is only let down by the less-than-average performance.

Not everyone needs a high-end tablet when the sole purpose for owning one is to watch content on the move. Families with young children might be interested, as the Nokia T20 is cheap but with a premium design thrown in for good measure. My only delay in giving it a full seal of approval is that for many people, a recent iPad might provide you with a better overall experience and with a longer lifespan.

While the build quality is good, I’m unsure the Nokia T20 would withstand the daily use and abuse that a young child can dish out. For kids, a rugged tablet like the Fire 7 or Fire HD 8 Kids tablet both priced under the $150 barrier is where you should turn your attention. For everyone else looking for a cheap Android tablet with a nice screen and that doesn’t look like a Tupperware lid, then the Nokia T20 is a fine package.

Where can I get the Nokia T20 tablet?

It’s available from a few online retailers including direct from Nokia.com and Amazon priced at $249.99.