Exclusive: Pixel will be able to stream Android apps to your Chromebook/PC, here’s how it works [Video] 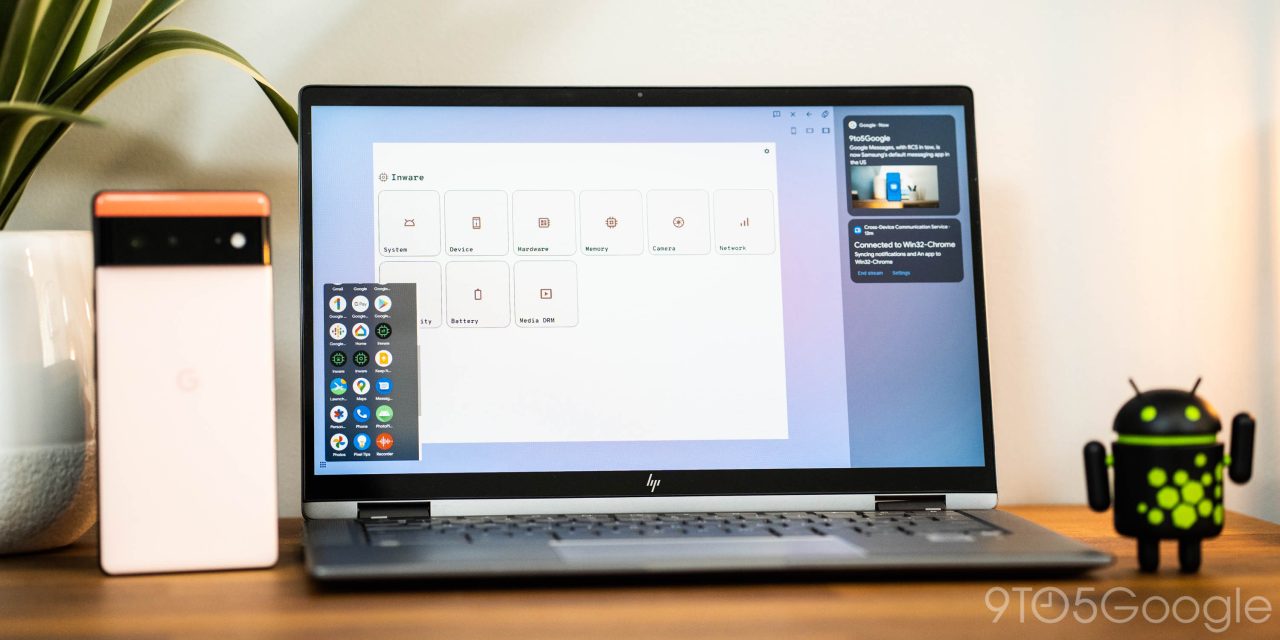 Google has been preparing a way to stream apps and notifications from your Pixel phone to your Chromebook or PC, and 9to5Google has enabled this feature to provide an exclusive first look at it.

Over the years, Google has created quite a few ways for Android phones (especially Pixel phones) and desktops/laptops (especially Chromebooks) to be “Better Together.” The most recent example is Phone Hub, which offers easy access to your phone’s notifications, quick settings, and more from the bottom corner of a Chromebook’s screen.

Another example is Messages for Web, which allows you to connect your Windows/Mac/Chrome OS device to your phone to get notifications for your incoming messages and reply to them in the web app. On Chrome OS, this is a bit more deeply integrated with the system, appearing in the Settings app, and allowing notifications while the app is closed.

Just over a year ago, we offered an in-depth analysis of “Eche,” an expansion of Phone Hub that we suspected would allow you to click an incoming notification from your phone and see a live feed of that app running on your phone. This, we speculated, would match the functionality of Microsoft’s Your Phone app for select Samsung and Surface phones.

At CES 2022, Google announced that later this year you will be able to access any chat app on your phone directly from your Chromebook “without needing to install them again.” Last week, Google publicly released the first Android 13 Developer Preview build for Pixel phones, and in it there are two “Cross Device” service apps. Each one appears to be dedicated to connecting your Pixel to other devices.

With these apps, our Dylan Roussel was able to enable cross-device streaming between a Pixel phone on Android 13 and a special web app. Despite our initial suspicion (and Google’s own announcement) that this would be a Chrome OS exclusive feature, we were also able to get this web app up and running on a Windows 11 device.

Stream to your PC or Mac

The experience — which features a gorgeous multicolor background — is able to open an app on your phone and livestream it through your browser. Once opened, you can then interact with the app just as if it were natively open on your laptop/desktop, including clicking, tapping, and typing — perfect for using your favorite messaging apps.

Another thing we didn’t expect is exactly how this feature works. Your Pixel generates an entirely separate virtual display, which is streamed to your laptop or desktop, rather than simply mirroring your phone’s portrait screen. This second display is where your messaging apps will appear. This means you can have an app open on your laptop/desktop without disrupting any apps running on your phone’s main screen.

Surrounding the app’s stream, there are a handful of controls for the cross-device streaming experience. In the top-right corner, there are buttons to send feedback, stop the app/video feed, go back a page, and resize the display. As this is a virtual display, it can theoretically be of any size. To that end, Google has included an option to use a “tablet” screen instead of a phone-shaped one.

At the bottom left, there’s a menu button that, when clicked, reveals the full list of apps installed on your phone. With this menu, you can launch any app on your phone, not just the messaging apps. In effect, your entire phone is accessible through Pixel’s cross-device streaming.

Meanwhile, along the right side of the screen-mirroring app, you’re offered a feed of your phone’s current notifications. As shown in the video above, clicking any of these opens cross-device streaming for the appropriate app to let you type out a full reply.

After a bit more digging, we believe that this web app is just how those on Windows, Mac, or Linux devices will experience Pixel’s cross-device streaming, while things will be a bit different on Chrome OS.

For Chrome OS, where Google has more control over the system, this cross-device streaming will be available from a built-in app which is deeply connected to Phone Hub.

By clicking on a notification from Phone Hub, you’re opened directly to a phone-shaped window with a live feed of the app running in that virtual display. Similarly, Phone Hub is expanded to include a list of “Recent Apps” that launch when clicked.

For now, Chrome OS’s version of the Pixel’s cross-device app streaming seems to be a bit less fully featured than the web-based version. We haven’t yet found a way to launch a specific app from the phone, nor have we seen any options to change the display size. But overall, the deeper integration into Chrome OS makes this version a bit more exciting.

From our initial testing, this app mirroring works surprisingly well across Windows laptops and Chromebooks, even when running on a lower-powered Chrome OS device like the Lenovo IdeaPad Duet. Judging solely from how good the overall experience is today, we believe that the Pixel series’ cross-device streaming may finally be close to launching.

That said, the two requisite system apps/services are currently only available on Android 13. If Google intends to launch Chrome OS’s phone app mirroring and/or the Web app in the near future, those apps would need to be added as part of a significant system update, such as a Pixel Feature Drop.

Again, Google has only announced the ability to reply to any message on Chrome OS, but – as we’ve demonstrated – the underlying capability is far more versatile and wide-ranging.