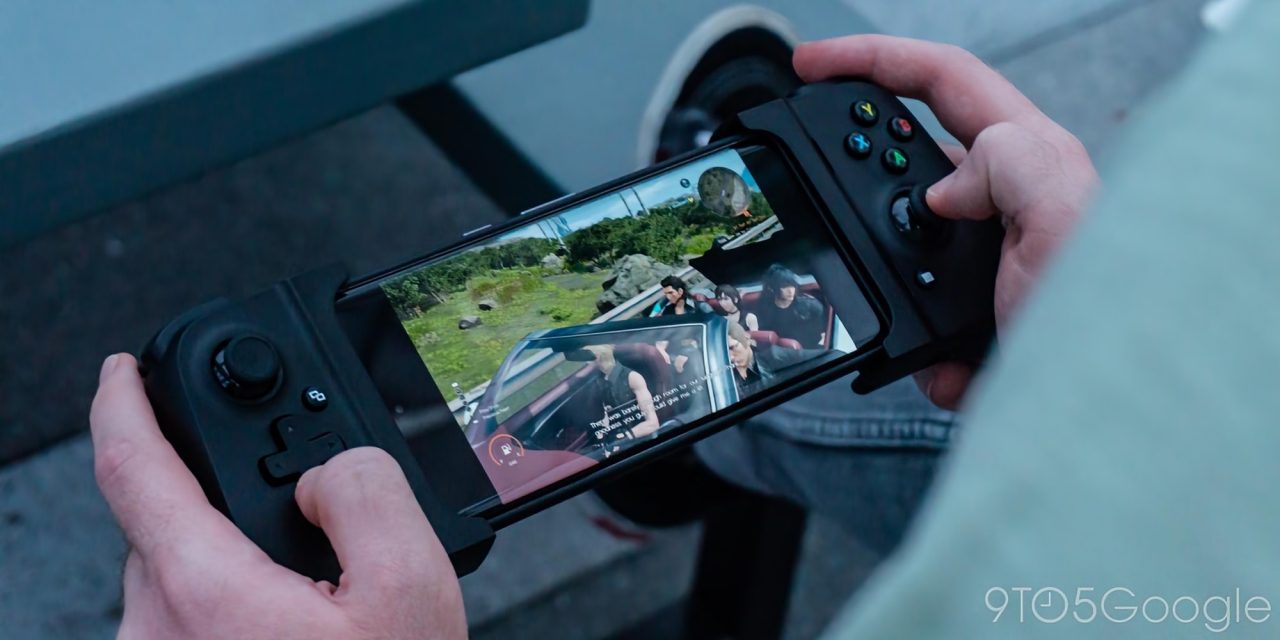 The Gamevice Flex rises above its own gimmicky design to become the must-have controller for mobile and cloud gamers alike.

The first thing you may likely have heard about the Gamevice Flex is that it has a unique design that allows it to adapt to nearly any phone while keeping your phone safely in its case. While that’s certainly true, I want to set that aside for last, as it can be easy to miss all of the other things this controller gets right if all you’re looking at is the gimmick.

First, let’s get a better idea of how the Gamevice Flex came to be. Gamevice has been in the business of creating game controllers for mobile devices for quite a few years now. Before there was even a market for mobile controllers — outside of emulation enthusiasts and drone pilots — Gamevice created bespoke options well-suited to particular iPhone/iPad, Samsung Galaxy, and Google Pixel devices.

Then in 2020, just in time for the beginning of the latest cloud gaming boom, Gamevice and Razer partnered to create the “Razer Kishi” controller, with a more generalized design, meant to fit most phones. Those two companies have since parted ways, and the original Kishi has been rebranded as the Gamevice for Android, an affordable $60 option.

While that previous generation Gamevice for Android was beloved in the cloud gaming community for its portability, its role as a budget-friendly option was clear with less-than-stellar comfort and the inability to fit certain phones — like the Pixel 6 and Pixel 7 — without sketchy modifications.

For this latest generation, Gamevice seems to have taken every bit of feedback and criticism and channeled it into a vastly improved design. To be frank, even without the adaptable design gimmick, the Gamevice Flex is well worth its $100 asking price. So let’s dive in, shall we?

In my earlier conversations with Gamevice’s CEO Philip Hyun, one of the core tenets that he emphasized about the Flex was “muscle memory” — that is, the ability to play with your “mobile” controller the exact same way and at the exact same skill level as your normal controller. From my weeks of playing games with the Gamevice Flex, I can attest that this controller quite nearly delivers on that promise.

Compared against the DualSense controller for PS5 — my preferred controller — I found the Flex to have pretty decent triggers, with about two-thirds the amount of pull depth. The change to Hall effect sensors on the triggers has also made them smoother and easier on the fingers compared to the previous Gamevice.

One small gripe I had is that I found the right thumbstick to be just a pinch off from where I’d like it to be for a first-person game. This was easily adjusted for by changing my grip, but that new grip style puts a pinch of additional pressure on my palms. Everyone’s hands are different though, so you may have a completely different experience.

Overall though, I’ve found that most everything on the Gamevice Flex — buttons, triggers, bumpers, and joysticks — was right where I’d wanted them to be. I needed almost no adjustment time to start playing games like Cyberpunk 2077 with the level of accuracy I’ve come to expect from myself. It all just clicks once it’s in my hands, just like any good controller should.

Plus, to help keep gamers comfortable for longer sessions, the Gamevice Flex controller has been upsized a bit, compared to its predecessors. This is especially noticeable in the rounded, somewhat protruding grips, which help reduce potential stress on your palms.

All in all, I’ve been able to play multi-hour sessions with the Gamevice Flex without any major issues or discomfort. Surprisingly, that’s still something of a feat for mobile gaming.

The number one thing that makes the Gamevice Flex possible is USB-C. Just as you can plug a USB-C dock into your laptop/Chromebook to gain a wealth of new ports, the Gamevice Flex takes full advantage of your phone’s multi-purpose charging port to power a few extra features.

For starters, like most controllers in this side-mounted style, there’s a USB-C passthrough connection that makes it easy to keep your phone charged up during gaming sessions. While plugged in, (so long as phone-specific features like Pixel’s Adaptive Charging don’t kick in) there’s no issue charging up your battery during your gaming session.

More importantly, one of my favorite parts of the Gamevice Flex is the inclusion of a traditional 3.5mm headset port. This port works on the same concept as a USB-C headphone dongle, and it’s a genuinely great addition to the controller. By using that headphone jack, you’re able to eliminate any potential audio delay that would normally happen with Bluetooth.

That said, you likely won’t even necessarily need to use headphones to hear your game. The Gamevice Flex features two audio slots that take the sound from bottom-facing speakers and redirect it toward you. In practice, I found games could be exceptionally loud and quite clear when the volume is turned up.

But what really sets the Gamevice Flex apart from other controllers I’ve tested over the years is just how well it handles the USB-C connection. Certain controllers I’ve tried will disconnect and reconnect to your phone any time you plug it in to charge. At no point did I have that problem with the Gamevice Flex, as the controller continued working seamlessly regardless of any changes to what’s plugged into the power or headphone ports. This was an easy thing to get wrong and be forgiven for, but the engineers at Gamevice really nailed it.

As always, the Gamevice Flex is easily compacted when you’re done playing. The two halves of the controller simply slot together while the center of the connecting strap snaps them together. From a portability standpoint, the new controller is a bit bulkier than its predecessor (an acceptable consequence of being more comfortable), but it’s still smaller than a full-size controller, making it easy to toss into your daily bag.

Adaptability, or “the gimmick”

Now then, with all of the good stuff out of the way, let’s address the awkward part of the Gamevice Flex — its one-of-a-kind adaptability.

The downfall of past Gamevice devices has been the inability to use the controller with some device or another. The best example of this was the Pixel 6, with its unique camera bar design, being unable to squeeze into the frame of the controller. Some gamers took to modding the controller, cutting away padding to allow the oddly-shaped phone to fit.

Beyond that, almost every game controller in this style — the ones taking after the design of the Nintendo Switch and Steam Deck — is only intended to be used with an uncased phone. The problem there comes down to thickness and the placement of the USB-C port. While it wasn’t a deal breaker for gamers, taking your phone out of its case certainly made things less convenient. And that’s before considering the wear and tear to your case each removal entails.

For the Flex controller, the designers at Gamevice have come up with a solution to both of these problems, albeit a solution that can be described as workable, but inelegant.

At the bottom of the Gamevice Flex box, there are multiple smaller boxes with various pieces of black plastic. You’ll slot two of these into the controller to act as spacers to put your phone at just the right height in order to align with the USB-C port, staying snug and secure.

To figure out which ones you’ll need, Gamevice has included a surprisingly handy cardboard sizing tool. Just attempt to slot your (cased) phone into the different notches until you find the one that just fits. Next to that notch, there will be a guide on which spacers to put into the Flex.

The whole process takes a few minutes at most, with the majority of that time spent sifting through the boxes to find the right spacers. Should you ever need to change phones/cases down the line, the spacers come out easily with a twist/flick motion. There’s also a set of rubber inserts included, for those who choose not to use a case on their phone.

Once I got used to the process, it was all too easy to switch adapters earlier this month when I upgraded from the Pixel 6 Pro to the Pixel 7 Pro. But the first time I saw the mess of plastic spacers, it felt more than a little overwhelming.

The most important thing I can stress here is that you should only have to do this step once — at least until you decide to switch phones or cases. Once the Gamevice Flex has the right adapters for your phone and case, it’s simply a controller that’s now ready to snap on and play at a moment’s notice. As they said in the old commercials — “set it and forget it.”

One last thing to note is that the Gamevice Flex still can’t quite fit every phone and every case. Foldables are still a no-go, as the hinge in Flip-style phones likely wouldn’t play nicely with the “vice” part of the Gamevice, and larger tablet-like foldables are too wide to fit. Similarly, if you have a very thick case, there’s a chance it may be too thick for the controller, while folio-style cases outright will not work.

Should you buy the Gamevice Flex?

If you’re a fan of gaming from your phone — whether it be mobile games, emulated classics, or AAA games in the cloud — the Gamevice Flex is the controller to own and well worth its $99 asking price ($109 for iPhone).

Between its ability to keep your phone safely cased, much-requested additions like the headphone jack, and a comfortable layout that maintains most of your muscle memory, the Gamevice Flex manages to be a jack of all trades. While the adapter system has potential to be a bit confusing, it ultimately becomes an afterthought, with your latest game taking center stage.