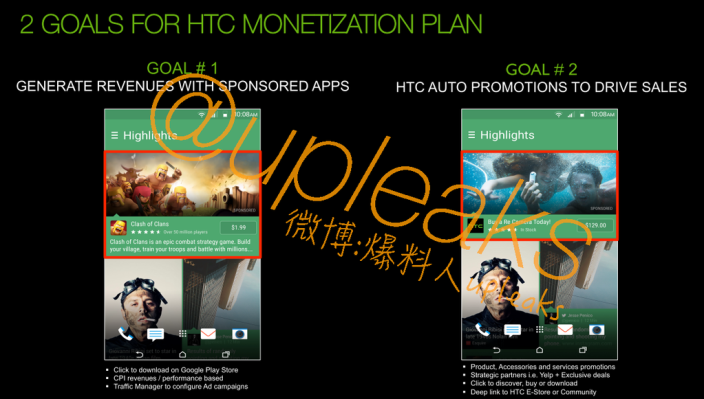 Well, the rumors are true: HTC has just announced that it has begun testing the “displaying of a limited number of promotions” to users of the BlinkFeed app in the U.S., U.K., Germany, Taiwan, and China. If results are good, the pilot will roll-out to more countries over time.

END_OF_DOCUMENT_TOKEN_TO_BE_REPLACED The HTC One mini 2 has officially been announced. This compact smartphone takes on a similar design when compared to the One (M8), but in a smaller form-factor. It’s definitely an upgrade over the previous One mini, but with its size comes downgraded specifications.

The HTC One mini 2 packs a quad-core 1.2 GHz Snapdragon 400 processor, 1GB of RAM, a 4.5-inch 720p display, 16GB of storage (with an expandable SD card slot), and a a 2,100mAh battery. You’re also getting the same 5-megapixel front-facing camera, a 13-megapixel rear shooter, and HTC’s famous BoomSound speakers.

END_OF_DOCUMENT_TOKEN_TO_BE_REPLACED HTC is expected to release the HTC One Max next week, and I wouldn’t be surprised to see Sense 5.5 come along with it.  END_OF_DOCUMENT_TOKEN_TO_BE_REPLACED