Google has today launched the Google Cast Remote Display plugin for Unity, in hopes that developers will now be able to more easily bring their mobile games to the TV. This is the same plugin that many games on the Play Store — including Monopoly Here & Now, Risk, and more — already use…

Google says that, as of today, developers can download the new Remote Display plugin for Unity from both GitHub and the Unity Asset Store.

Developers with preexisting Unity games simply need to import the Remote Display package to their project, add the CastRemoteDisplayManager prefab, and configure cameras for the local and remote displays. More detailed information can be found at Google’s Developers Blog. 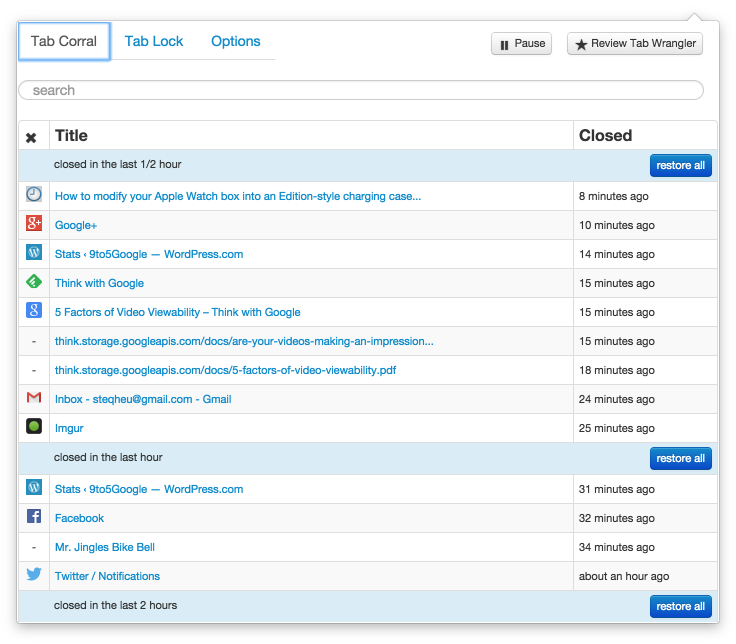 One of the things I struggle with on a daily basis—and forgive me, I know it’s a first world problem—is an overload of Google Chrome tabs. I have a bad habit of just opening countless new tabs without even thinking, and I’m really bad about managing them and closing the ones I’m no longer using. Chrome just makes it way too easy to end up with a few dozen tabs open, while only actually using a few.

I figured it wasn’t possible that I was the only one that struggled with this. With just a quick Google search, I found a free Chrome extension called “Tab Wrangler” to help rectify the situation. It’s a nifty little plugin. Without hardly any set up, it will help manage your tabs for you and close the ones you don’t need—and it will even keep you updated on your negligence with a little red badge telling you how many tabs it has closed for you… END_OF_DOCUMENT_TOKEN_TO_BE_REPLACED

After announcing late last month that video calls for its Hangouts service in Chrome no longer require a plugin, Google is today rolling out the change to Google Apps users as well.

The change means that users attempting to make a video call from Hangouts using their Google Apps account will no longer be prompted to install a browser plug-in for Chrome. Now, users will only have to grant permission to their computer’s mic and camera to initiate the call (as pictured above).

Following this update, when users try to start a video call for the first time, they’ll see a message underneath the address bar asking for permission to access their computer’s mic and camera. If they want to change their choice later, they can change it from the address bar in Chrome… We recommend users familiarize themselves with this change before seeing the prompt.

The change first launched in the Canary and Developer builds of Chrome and later to all users in the public, stable release of Chrome, but today arrives for Google Apps users.