Review: A month with the Samsung Chromebook 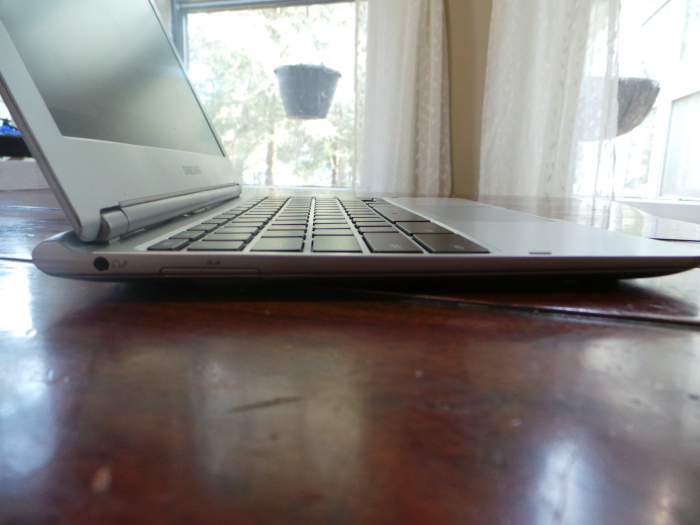 TL;DR: This is the first Chromebook effort that fulfills the ChromeOS mission: good quality, excellent (MacBook Air-like) design, low cost and functional, and easy to use. It won’t replace a mid-high end machine, but, for people with basic needs or who want an inexpensive second computer, this is a no brainer at $250.

Google’s Android and ChromeOS  represent two different visions of the future of computing from inside the same company. The Android vision is a touch-enabled platform with apps that has been in vogue since the iPhone was released in 2007. The ChromeOS is the realization of the decades-old network client computer—which is just a browser as a user interface for a bunch of cloud services.

Android has clearly been popular on both phones and now tablets, but Chrome sales have been pretty lackluster until now. From my point of view, that’s due to a couple of reasons. For one, the devices, made by Samsung and Asus, were lackluster in speed compared to the Windows and Mac counterparts. ChromeOS devices should be faster than comparably equipped Macs and PCs because there is no overhead—it is just a browser. Yet the CR-48 and again with the second-generation Chromebooks weren’t noticeably faster than cheap netbooks. That’s the other problem: Chromebooks weren’t cheap – compared to similarly specced PCs, anyway. Often, you’d be able to find a cheaper Windows PC on sale that otherwise was the same or better.

So, to break it down: Chromebooks were overpriced and slow (and the design wasn’t very inspired).

Then came the third generation…

I got my $249 Samsung Chromebook a month ago, and I have used it and shared it ever since. One look at it and you’ll notice an uncanny resemblance to a MacBook Air. Say what you want about copying Apple, because in this case, it works pretty well for the device.  It is thin at .75 inches thin and featherweight at under 2.5-lbs. Although it may look like the 11.6-inch MacBook Air, the silver exterior is actually plastic.

The plastic in this case isn’t necessarily a bad thing (until you drop it), because it allows the machine to stay at about the same weight as the MacBook Air with cheaper parts. And yet, it has a very solid, firm feel. The 30 W/hour battery is rated for about 6 hours on a charge, and that feels about right. Interestingly, that’s longer than an 11.6-inch MacBook Air’s 5-hour rating, and it is most likely due to the power efficient 1.7GHz Exynos 5 Dual core ARM processor inside.

Yes, this is the first laptop I’ve ever considered using for any length of time that’s powered by an ARM processor. And that’s a big deal. That’s a big deal for companies making laptops and that’s a huge deal for Intel. If Samsung and Google can pull this off, it can make cheap, powerful machines with super-cheap, super power efficient ARM chips (which Samsung happens to build).

Display: One current casualty of this decision is Netflix, because it doesn’t work on the Samsung ARM Chromebook. I got a message saying Netflix and Google are working on this, though. Hulu works just fine, however, as does Sony’s Crackle and Amazon Instant Video.

They work fine—unless you enjoy moving around while watching, that is. Samsung, which make some of the world’s best displays, saved a lot of money by outfitting this $250 machine with a really bad display. Think about the displays on an airplane that inverse if you look at them at a 45-degree angle. The Chromebook’s display is washed out but passable when looking straight on, but don’t try to share to picture with a friend because it has bad angles.

Did this kill the experience for me? Hardly. In fact, coming from a MacBook Pro/Air lifestyle, I found myself able to entirely forget I was using a Chromebook…as long as I was a few pages deep in the browser.

Keyboard and Trackpad The keyboard and trackpad (and the software to go along with it) are top-notch here. Rarely was there a time where I hit the wrong key. The main problem I had as far as the keyboard is concerned was with the ALT and the CONTROL, as they are reversed on a Mac.

Previous Chromebook trackpads sucked. Point blank. This one is as good as a MacBook, and you’ll hardly notice the difference within a few hours of practice. Eyeballing it, it appears to be about the same size as the 11.6-inch Air and has the same feel.

So, you have a great keyboard and trackpad and a passable display. What other sensory I/Os are out there?

Sound The 3W stereo speakers are about as good as you’d expect to hear on a $250 computer— muffled but passable. You can do sound out via AUX mic/speaker port or via Bluetooth. Both worked well in my testing, but Bluetooth takes a while to connect after booting up (so does Wi-Fi, for that matter).

Ports One area where the Chromebook beats the MacBook Air is ports and port location. An HDMI Video out port, USB2 port, USB 3 port, and the power port are on the back, while the headphone mic port is on the side. Adapters are available that turn the HDMI out into VGA or DVI, if you need to use a projector or external display. It is nice to have this stuff hidden out of sigh, rather than alongside the computer (where the headphone/mic port still is placed). Some folks might prefer Ethernet, but there are enough USB-Ethernet adapters out there.

Front-facing camera I can’t tell if the front-facing camera is poor or if it is just the display, but you probably aren’t going to be overly impressed with what you see in either case. The color is washed out, and the people on the other side of Hangouts aren’t going to be overly impressed either. That said, it works and worked consistently for me, which is something that I had some issues within the previous Chromebook.

3G Another area where a Chromebook is favored over a Mac is the built-in 3G. Sure, you can tether, but often times its is nicer and quicker to have a built-in version. The particular demo unit I have doesn’t have 3G, but it is pretty clear from earlier versions that Google and Verizon have this nailed down. You get 100 free Megabytes of data per month that— with your Gogo hotspot cards—will keep you connected at all times.

One other area not often talked about with laptops, but makes a big difference, is the hinge. Samsung made a really strong and firm hinge on this machine and it shows. It feels a lot less flimsy than the previous model, and I’m pretty confident that it will last a long time.

Software Google’s latest iterations of the ChromeOS have been impressive, and the current version 23 is world’s smoother and faster than the earlier versions that ran on the last iteration of the Chromebook. There are still some hiccups, especially when you open up enough browser windows to max out that 2GB of DDR3L RAM. For the most part, however, you can forget you aren’t on your MacBook Air in a Chrome browser.

Printing is still a pain, because of Google’s Cloud Print software. If you don’t have a compatible printer or a compatible PC to act like a cloud print server, you are out of luck. This keeps improving, though, and Google will probably get it right at just about the same time paper becomes obsolete.

I was able to let a few friends and relatives use this machine to gauge their opinions on the product.  These are people with PCs and Macs who, unlike me, don’t spend all day on a computer. If I had to guess, I’d say 1- to 3 hours per day average. Almost every one of these people like the new Chrome experience, and they’d be interested in buying one at the $250 price point.

Wrap Up: At $250, this is a no-brainer buy for many people. Just for Google’s bump in services alone, this is a compelling offer. Google gives you 100 GB of online space—something that normally costs $60 per year—free. It also hooks you up with 12 Gogo in-flight Internet vouchers that are worth around $10 each. That means (on data costs alone) the Chromebook breaks free just after two years of use. Plus, you get a very usable machine to ‘boot’.

So, who is this for? If you depend on your computer’s speed for your livelihood, this computer is going to be frustratingly slow. Get a faster machine like a high-end MacBook Air or MacBook Pro. However, if you want to have a backup machine or a secondary machine, the Samsung Chromebook makes a lot of sense for emergencies.

It also makes sense for grandparents or kids who want to browse the web, write emails, do light word processing, or some photo manipulation. These update themselves when new software is available, and they require almost no instruction or maintenance.

For this same reason, it would make an excellent computer for light workers who don’t need specialized apps like desktop publishing or Microsoft Corporate apps.

For those with even thinner pocketbooks, ASUS makes a $200 Chromebook which has Ethernet and VGA ports and a traditional hard drive (and lots of upgrade options). However, it is much thicker and cheaply made and reviewers seem to favor the Samsung model.

In short, there aren’t many people for whom the Samsung Chromebook doesn’t make sense. And that’s probably part of the reason it has been sold out for so long at retailers like Amazon. Best Buy does have some in stock and you can also get them at Tiger Direct or at the Google Play store as well as many other outlets internationally.