IFA 2014 Preview: Here’s what you can expect from Samsung, Sony, ASUS, LG, and more (Video) 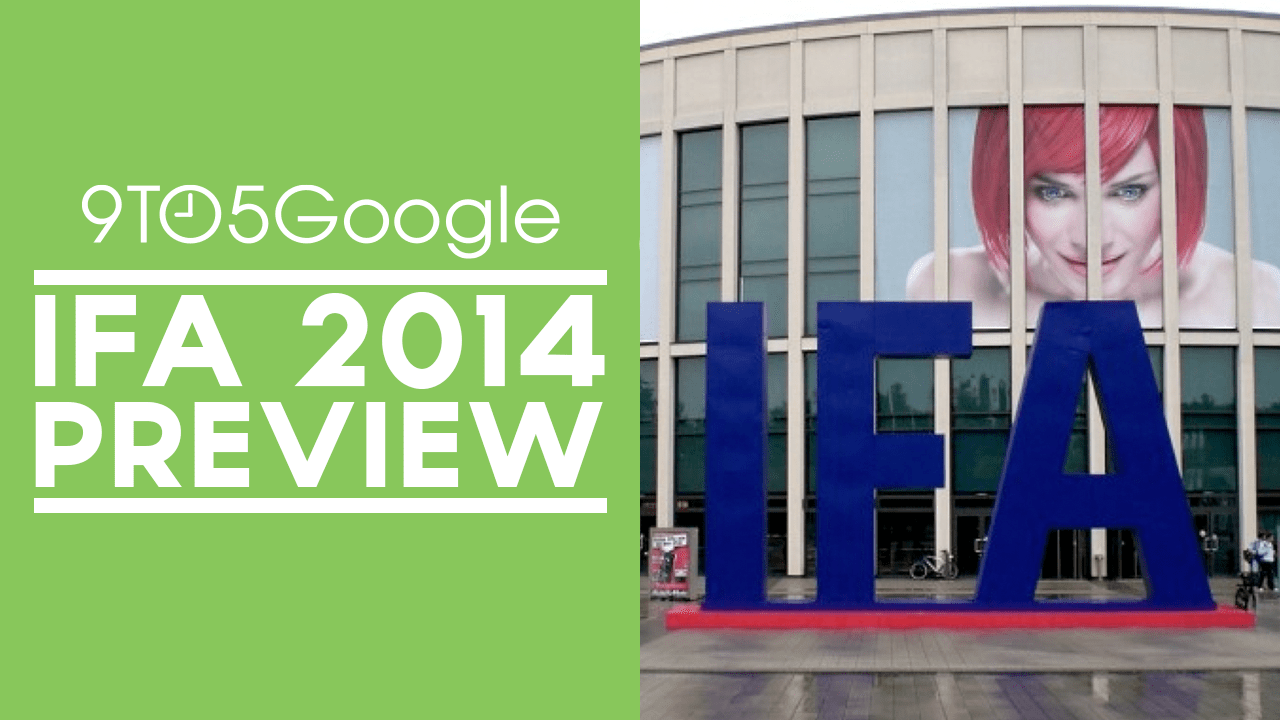 IFA 2014 is almost here and we’ll be out in Berlin bringing you full coverage of the show. If you’ve never heard of IFA, it’s a Berlin based trade show that’s similar to CES. IFA is up there as one of the largest trade shows of the year which normally brings a handful of exciting announcements in all areas of technology. While September may be a fruit company’s only time to shine, the rest of the major tech giants are busy finishing out the year with a bang…

Samsung, LG, ASUS, Sony, and Huawei along with many other major companies will be in attendance and holding press events throughout the week to launch new products. While we’re not 100 percent sure of what every announcement will hold, there are several facts out in the open and the rumor mill has provided strong guidance in educated guesses. Here’s what you can expect from IFA 2014 and a small preview of what’s coming.

Check out our IFA 2014 preview video below:

What’s a major tech event without a Samsung announcement? Don’t worry, because as we’ve come to expect with previous years at IFA, Samsung will be officially unveiling the Galaxy Note 4 during a press event on Sept. 3, 2014. The entire event will also be streamed via Samsung’s YouTube channel. We’ll be getting hands-on with the Galaxy Note 4 and providing a comparison to its predecessor and other flagship devices. The Galaxy Note 4’s rumored specifications include a 5.7-inch QHD (1,440 x 2,560) Super AMOLED display, a quad-core Snapdragon 805 processor, a 16-megapixel rear-facing camera, and 4GB of RAM. Along with the Note 4, Samsung will be debuting the Gear S which is a Tizen based smartwatch the breaks free from a smartphone. The Gear S was recently announced and it’s Samsung’s first attempt at a smartwatch with stand-alone features that will not required a smartphone for connectivity.

Rumor has it that Samsung is also announcing a “Gear VR” headset. This connected device may work alongside a Galaxy smartphone to provide an immersive 3D experience that’s similar to Oculus Rift or Google Cardboard, but aside from rumors, nothing else has been confirmed at this point.

Samsung may be entering the VR industry.

Sony is back this year with possibly another exciting smartphone announcement. It’s hard to believe that Sony announced the Xperia Z1 at IFA 2013 and just a year later, we may see the third generation launch. According to rumors, the Z3 will feature a 5.15-inch 1080p display, 2.4GHz Snapdragon 801 CPU, 3GB of RAM, 16GB storage and a 20.4-megapixel rear camera. The Xperia Z3 is rumored to launch on a couple of major US carriers including Sprint, but our source says that the Xperia Z3 may be a T-Mobile exclusive. What’s interesting is that the Z2 was just announced back in February at MWC. Either way, we’re excited to see another Xperia smartphone and hopefully it will be available through all major US carriers this time. We’ve independently heard that Sony may also release a Z3 Compact smartphone and a new Android Wear smartwatch as well. Other rumors have suggested, Sony may also have plans to launch a new Xperia tablet under the “Compact” line. The Z3 Tablet Compact was first spotted on leaked Sony documents, but soon after Sony released a teaser image that slightly confirms our suspicion. They’ve also published a new teaser video showing off three possible products.

Sony update: We’ve received inside information about Sony’s IFA launch plans. For our full reveal of the smartphones and waterproof tablet being announced, check out the article here. We’ve also uncovered the details regarding Sony’s upcoming SmartWatch 3 and SmartBand Talk.

It hasn’t been long since we’ve seen LG around the tech space. The Android Wear-based G Watch was just released and the G3 hit store shelves only a few of months ago, but South Korean company is at it again. Recently, LG announced the “G Watch R” which is a circular Android Wear smartwatch. This may be one of the only Moto 360 competitors this year, but it looks like this will be a tough one to beat. No specifications or pricing have been unveiled yet, but it will be officially debuted at IFA. In smartphone news, LG will also showcase the G3 Stylus smartphone which looks to be aimed at becoming a Galaxy Note 4 competitor, but we’re not making any assumptions just yet. The G3 Stylus is downgraded (compared to the G3) in terms of specifications, so it may not be a mass-market device. This is everything we know about ASUS’s ZenWatch.

Need more smartwatches? No? Well, too bad. ASUS will be unveiling the recently teased ZenWatch at IFA. This new smartwatch is running Android Wear (like most of them this year), but it’s said to be competitively priced and aimed at stealing market share from the LG G Watch and Samsung Gear Live. Maybe we’ll see a sub-$199 Android Wear smartwatch this year. All we know at this point is the name and design hints as shown in ASUS’s official teaser video.

Unfortunately, Motorola hasn’t announced any keynote plans for IFA 2014 and instead, the company is holding a press event in Chicago to debut the Moto 360, rumored Moto X+1, Moto G2, and (as the invitation implies) some sort of headset. We’ll have to wait until the company’s Sept 4th event for all of the details, but hopefully they will have some of these devices on display at IFA after the announcement everyone in Berlin can get a closer look. Well, this is an awkward teaser image.

If you’re a Huawei fan, you should probably pay attention to tech news on Sept 4, 2014. Huawei is having a press event and could be announcing the Ascend Mate 7 as previous rumors have suggested. Who knows what the heck Huawei’s teaser image actually means, but I think it’s safe to say there’s a smartphone announcement hidden somewhere.

Well, HTC could stop by with some unexpected announcements, but there’s nothing official (or unofficial) at this time. We haven’t seen any compelling rumors that lead us to believe anything exciting is happening with HTC at IFA 2014.

As you can see, the next week will be an exciting time for tech. It’s possible that we’ll see a good amount of these devices go on sale before the end of the year, giving you plenty of gift choices for the holidays. We’re excited to bring you coverage of the event, so stay tuned for all things IFA over the next week. What are you the most excited to see?