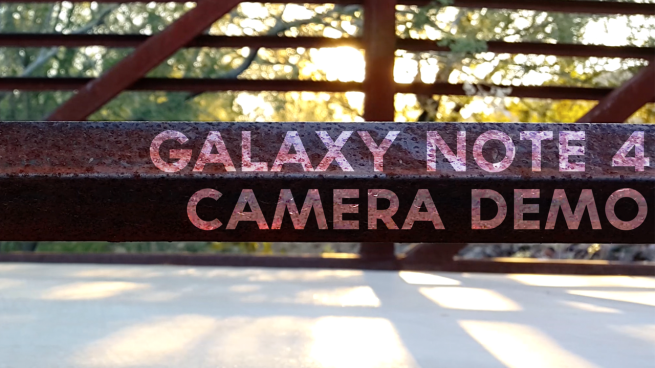 One of the most important components of a smartphone is its camera. Whether you’re shooting video or taking pictures, there’s a certain level of quality needed to capture those precious moments. Let’s face it, most of our lives are documented by the smartphones we carry around, so why not have one with an excellent camera?

As we covered in our full comparison article, the Galaxy Note 4’s camera features some major improvements over its predecessor. Samsung has stepped up the optics, sensor, and quality of the Note 4’s camera and we decided to put it to the test…

The Galaxy Note 4 features a 16-megapixel rear camera with optical image stabilization. It has the ability to shoot up to UHD (3,840 x 2,160) quality video. In my opinion, this camera is amazing in acceptable lighting. There’s not much that can touch it aside from maybe Apple’s iPhone 6 and 6 Plus. Either way, the optical image stabilization and UHD quality really makes for a great camera. It’s a definite upgrade over the Note 3’s camera in every way.

Raw camera tests are nice, but I’m a fan of pushing a device to its limits to see what it’s truly capable of. In the video below, we’ve put the Galaxy Note 4 through an all-out cinematic camera test. The footage was taken straight from the Galaxy Note 4 and graded/edited in Adobe Priemere. We recommend that you watch the video here on YouTube for the best possible quality (4K), but it’s also embedded below. You may be shocked by the quality of the Galaxy Note 4’s camera.

As you can see, the quality is nothing short of amazing for a smartphone. Mind you, proper filmmaking tools (camera slider, tripod and fluid head, monopod) were used to capture the footage, but nonetheless this is what the Galaxy Note 4’s camera can do under the right conditions. This is likely a best case scenario, but it’s a great example of how far smartphone cameras have come.

Smartphone cameras are quickly becoming a suitable replacement for point-and-shoots. As mentioned, our “camera test” showcases the best quality video we could obtain from the Note 4. That being said, “the best” is pretty epic. Your mileage may vary, but the optical image stabilization and 16-megapixel sensor will yield great results in most situations. What do you think of the cinematic capabilities of the Galaxy Note 4’s camera?