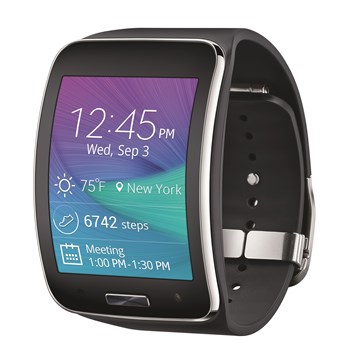 Samsung on Thursday announced that it will be launching the Gear S smartwatch in the United States on next Friday, November 7th. The first 3G-connected smartwatch was originally announced in August and features a 2-inch curved Super AMOLED display, 1.0 GHz dual-core processor, network connectivity, 300 mAh battery and more.

The Gear S essentially doubles as a fitness tracker, with a myriad of sensors including an accelerometer, gyroscope, compass, heart rate monitor, ambient light sensor, UV sensor and barometer. The smartwatch is based on Samsung’s own Tizen software platform, a clear differentiation over Samsung’s other smartwatches and Android Wear.

Samsung is positioning the Gear S as an extension of its Galaxy lineup of smartphones. The smartwatch has built-in network connectivity for making calls and managing contacts, messages, notifications and emails on the go. Additional hardware specifications include 4GB of internal storage, Wi-Fi 802.11 b/g/n and Bluetooth 4.1.

Samsung’s Gear S will be available in white and black on AT&T, Verizon, Sprint and T-Mobile, alongside Samsung Experience Shops in Best Buy locations in the United States.

Verizon on Thursday confirmed that it will soon carry the Gear S for $349.99 on contract.

AT&T announced on Thursday that the Gear S will be available through its retail stores and website on November 7th for $199.99 with a new two-year service agreement. AT&T customers can add the Gear S to a Mobile Share plan for $10 per month.

T-Mobile on Thursday confirmed that it will begin carrying the Gear S on November 9th for $0 down and monthly payments of $14.58 for 24 months. The carrier has added a new plan for the wearable that costs $5 per month and includes unlimited talk, text and up to 500MB of high-speed data for T-Mobile post-paid voice customers.

“Finally, a smartwatch that is the perfect complement for your smartphone – as well as a fully capable stand-in that won’t miss a beat,” said Jason Young, Senior Vice President, Marketing at T-Mobile. “The Gear S is exactly where this industry is headed − more connected, more intuitive, more personal − and more powerful on T-Mobile’s Data Strong network with our new wearable rate plan.”

The new plan for the Gear S includes the following:

Sprint will begin carrying the Gear S in stores and online on November 7th for $0 down and monthly payments of $16 for 24 months with a service plan required. Sprint customers can add the Gear S to a Family Share Pack for a $10 per month per line access charge.

“Samsung Gear S offers an amazing wearable experience and the Sprint Family Share Pack offers the best value to consumers,” said Doug Kaufman, director-Device Strategy, Sprint. “With the overhaul of our network, the Sprint network is there when our customers need it for all the ways they depend on their wireless devices.”