The Google Lunar Xprize contest has the final goal of taking a robot to the moon, but it’s not just going to lay out the entire $30 million in prizes on one day. Today, Google and Xprize announced five companies that are sharing a total of $5.25 million for reaching milestones in three categories of achievement.

The three categories are imaging, mobility and landing technology, and the company taking away the most prize money today is United States-based Astrobotic Technology, raking in a total of $1.75 million across all three categories. Other winners include Team Indus from India, Hakuto from Japan, Moon Express from the US, and Part-Time Scientists from Germany. The cash brought in by these four companies varies between $500,000 and $1.25 million.

Astrobotic’s prizes in “Mobility” and “Imaging” were actually announced late last year alongside the competition’s deadline being extended by a year. But today we’ve learned that the group has also been selected for one of the $1 million “Landing” prizes as well. 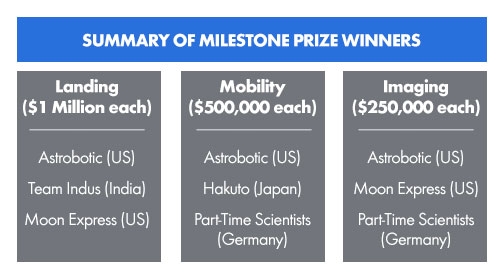 The $20 million grand prize will be handed out to the company that manages to land a robot on the Moon that can move more than 500 meters, and it must also stream video content from the surface. Teams must have proof of a scheduled launch before the end of this year, and companies who weren’t awarded prizes today are still eligible, but all companies are required to get their robot to the Moon with less than 10% government funding.