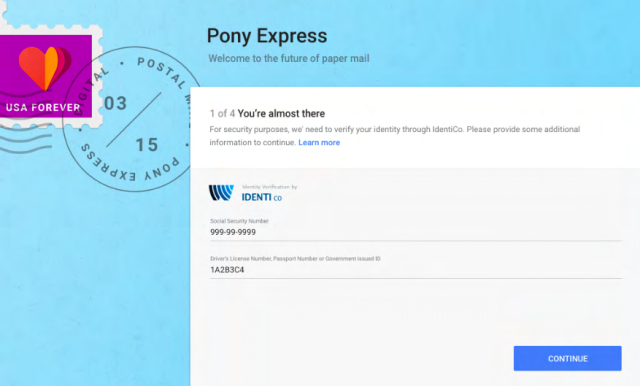 According to a new report from Re/code, Google is soon planning to launch a service that will allow Gmail users to manage, pay, and receive all their bills directly within Gmail. The service is dubbed Pony Express right now, although it’s unclear if that’s a codename or what Google actually plans to call the service.

Pony Express looks to put all of a user’s favorite mail, the bills, into Gmail, rather than a physical mailbox. The process to sign-up would include a user inputting their name, address, and Social Security number. Google would then allow a third-party company to verify the user’s identity. After that process, users would then possibly be prompted to provide a full credit card number or telephone service account number.

Google appears to be, according to leaked documents obtained by Re/code, partnering with third-party services that print and mail out bills for companies like insurance providers, telecom companies, and utilities. Once a user goes through the sign-up process, he or she will be able to receive bills and any other mail in Gmail. Gmail will automatically separate the content out into a Pony Express folder.

In addition to converting physical mail to digital, Pony Express also looks to allow users to pay their bills directly within Gmail. Users will be able to link a bank account or a debit card to their Google account to do so. Google Wallet, notably, doesn’t yet support the ability to link a bank account. Finally, Pony Express would also allow users to share a bill with another Gmail user, such as a spouse or roommate. There’s also a feature that allows users to take a photo of a physical piece of mail and archive it into Pony Express.

Google’s reasoning for launching a service like Pony Express seems apparent. The company could use the data it gathers from Pony Express to further improve ad-targeting. The financial data it collects could also be used to ease the company into even more fields, such as direct selling of insurance plans to users.

Re/code beleives that Pony Express will launch in the fourth quarter of this year.