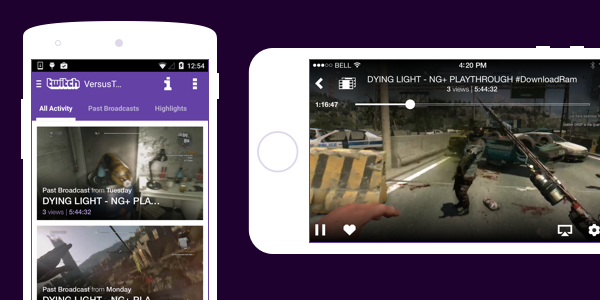 Twitch announced today that its mobile application now supports video on demand content, a feature that has been requested by fans of the service for quite some time. While the app was previously streaming-only, users can now access “highlights and past broadcasts” from all Twitch Partners and what Twitch says is a growing list of broadcasters whose videos are HTTP live streaming (HLS)-enabled.

While the official change log for this version only mentions this one major new feature, looking at reviews for the Android version reveals a few more details. The latest version of Twitch reportedly also sports a new colored status bar, and a new emote panel as well. At least one user reported that “some of the emotes are very small and hard to see” in the new emote panel.

Twitch says that they encountered a security concern that required them to re-list the app on the Play Store, rather than simply providing a new version. So for those that already have the app, you’ll need to head over to the new app listing and download version 4.0. Twitch recognizes that this might be an annoyance to some and says they’re going to do their best to “make it a one-time deal.”