Upcoming OnePlus 2 set to have 4 GB of LPDDR4 RAM 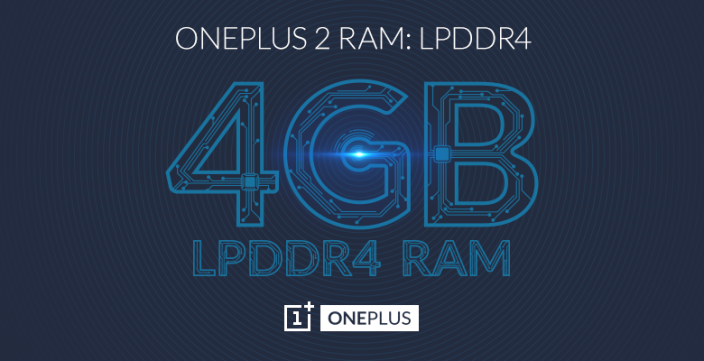 Continuing its obnoxious parade of announcing the OnePlus 2 specs one at a time, the “Never Settle” company has come out today to announce that the OnePlus 2 is going to have 4 GB of LPDDR4 RAM.

Previously, OnePlus has mentioned that the OnePlus 2 will have a Snapdragon 810 processor (that has been revised to be less heat-prone). Additionally, the device has been announced to sport a USB Type-C port, as well as a fingerprint sensor. Other specs are still unknown, but that is sure to change as OnePlus continues dragging out the phone’s announcement.

The phone is going to be priced somewhere between $322 and $450 ($449, anyone?), and will be launching officially in some kind of new-fangled virtual reality fashion on July 27th.

Why did the company go with 4 GB of RAM? Here’s what they had to say:

Another notable benefit is lower power consumption for better battery efficiency. That means you’ll be able to use your favorite apps (and more) without draining the battery. With LPDDR4, you get twice the bandwidth performance as the LPDDR3 at the same power consumption profile. The RAM of the OnePlus 2 uses a lower operating voltage than its predecessor, decreasing from 1.2V to 1.1V. And with speeds up to 32 GB/s, it is also twice as fast as the LPDDR3.

You can read our entire roundup of the specs, price, and release date of the OnePlus 2 here.