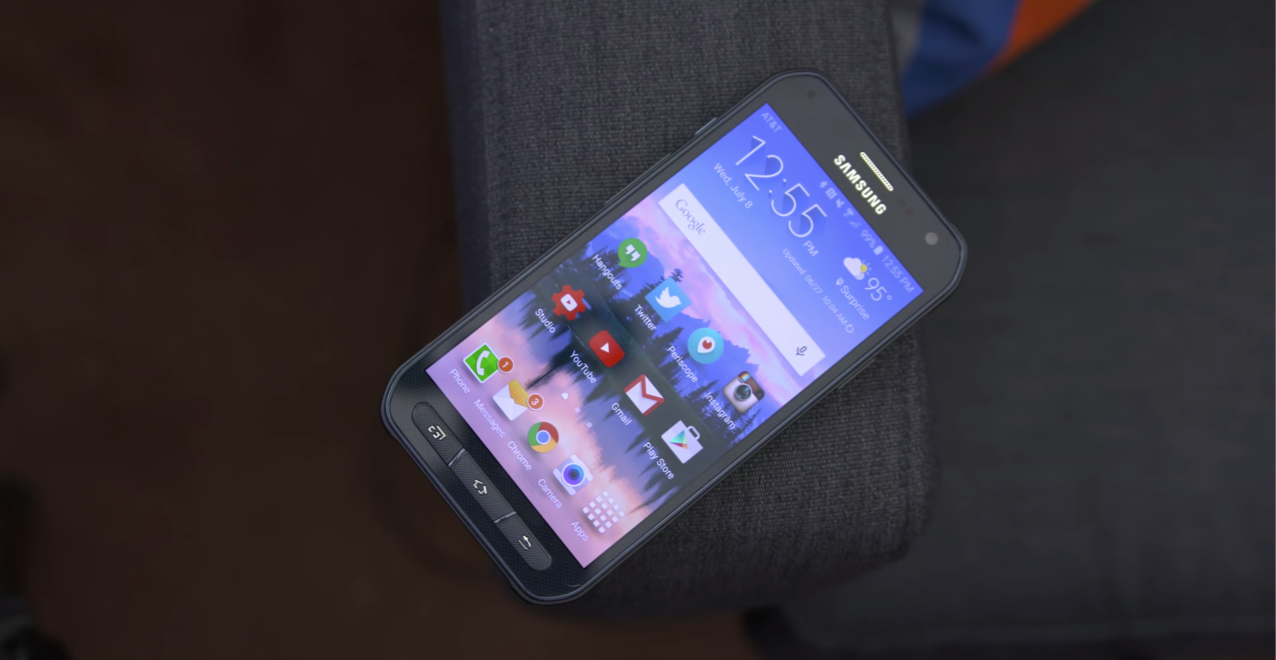 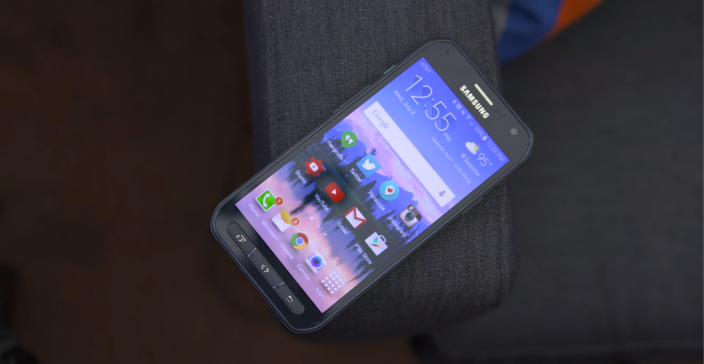 If you’ve been following our thoughts on this year’s flagship smartphones, you know that we think that Samsung’s offerings are some of the best. The Korean company really stepped up their game with the Galaxy S6 and S6 Edge, introducing a much more premium build, a cleaned up version of TouchWiz, and internals that are worthy of 2015. In that vein, the Galaxy S6 Active is pretty much identical. It has a really nice hard plastic body, the same less-horrible TouchWiz, and the exact same internal specifications as its standard S6 brethren. But it’s not perfect, and there are always going to be compromises. Maybe fewer compromises than ever before, but compromises nonetheless…

Let’s get the basics out of the way. The phone was first made available in the middle part of June, and as mentioned, its internal hardware is almost identical to the S6. The phone runs Android 5.0.2 Lollipop out of the box, packs an Exynos 7420 64-bit octa-core processor, 32GB of internal storage, and a 5.1″ Super AMOLED display with a resolution of 1440 x 2560 and pixel density of 577 ppi. The phone has a 16-megapixel rear camera, a 5-megapixel front shooter, and of course the usual support for 4G LTE, Bluetooth 4.0, and 802.11 a/b/g/n/ac WiFi. It’s just about as capable as the S6, and in most ways, isn’t any more capable.

But the phone is definitely a different phone, with the first big difference being its battery. The S6 sports what is a measly 2550 mAh battery in comparison to the 3,500 mAh that the Active comes with — and it’s definitely noticeable. My unit was able to go at least a couple of days with lighter use and I even spent some of that time using the phone as a hotspot. Right now, the phone that’s sitting on my desk has 41% left, and I haven’t charged it since the night before last. If you’re willing to deal with the fatter form factor and rugged design, which I hope would be the main reason you buy this phone anyway, then this battery is a nice benefit. 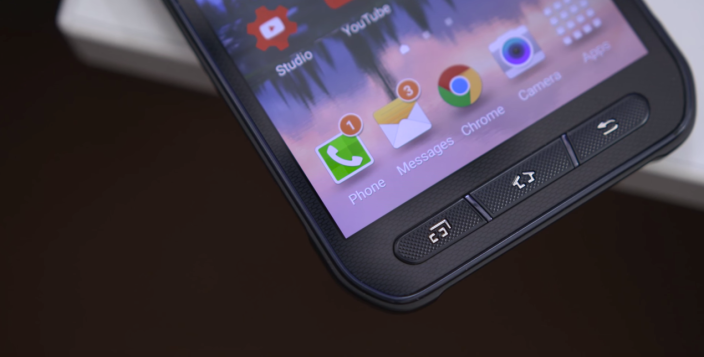 Perhaps the most obvious thing that sets this phone apart is its form factor. The back has a nice textured finish that comes in a few different designs (I have the white camo version, which I’m a huge fan of), the hard plastic side casing wraps around the back in a way that may or may not make it less likely to suffer damage upon dropping, and it’s just heavier and thicker by some margin. Also, the front three buttons are all physical keys, as compared to the S6 and S6 Edge which only have a physical home button. Sadly, you don’t get a fingerprint sensor with this phone, but you do get an additional button called the “Active Key” located on the left side that can give you quick shortcuts to your favorite apps and features 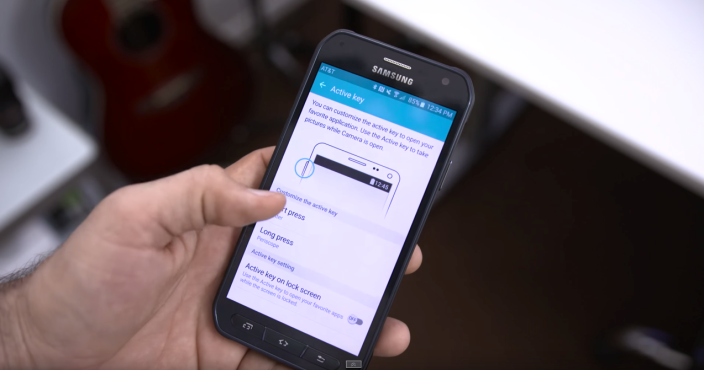 You can’t forget that one of the major draws of the Active variant is that it’s pretty much life-proof. With IP68 certification, the phone’s rugged design brings dust-proofing and water-proofing. I was able to throw the Active in a tub of water for ten minutes, watch some YouTube videos, and take a shower with the device without it suffering any damage at all. This isn’t officially possible on most of this year’s flagships, but as we’ve found in most water-dunking tests, even the non-Active Galaxy S6 seems to resist water pretty well — and so do many of the year’s other flagships. So this is more important if you’re, well, active, and might be dropping the phone in a lake.

Personally, as someone who doesn’t live a particularly active and outdoorsy lifestyle, the compromises just don’t make sense. I would much prefer to have a fingerprint sensor over durable multitasking, home, and back buttons. I would much prefer that fingerprint sensor over an additional button that provides shortcuts to apps. I would prefer to have a slightly less massive battery in return for a sleeker and sexier form factor. Basically, the S6 Active isn’t for me, based on my few days of playing with it. But it’s surely for someone, and these features aren’t trashy. They’re compromises, and if you go with an S6 Active, they’re compromises that you want. 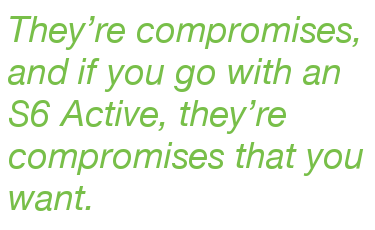 And that’s okay. The quick access button is a nice touch, and it works well. And the physical buttons are definitely tactile and responsive. The build quality all around is great, and having that longer battery life is something that’s really nice to have. There was one minor annoyance that I encountered, though, from a purely objective standpoint. The physical buttons can be hard to press without accidentally tapping something on the bottom of the screen. Over the course of a few days, I had to teach myself how to press the bottom and sides of the buttons to keep this from happening. Maybe it’s just because I have big thumbs.

From a software standpoint, the same exact things we said about the S6 apply. TouchWiz is so much better than it has ever been. You can navigate around and through apps with minimal problems, the design of the OS has been overhauled to be more Material-y, and everything from the Settings app to the quick settings shade have been rethought. But it’s still TouchWiz, and Samsung is still packing a ridiculous amount of bloat. There were dozens of pre-installed apps that I didn’t want when I first booted the phone, Samsung’s cheesy water animation is getting really old in my book, and the Google Now Launcher still feels utterly superior.

So that’s what I did. When I first booted up the phone, I removed as much of the bloat as I possibly could. This took a good half an hour to accomplish, but most of the pre-installed apps are disable-able thankfully. I installed the Google Now Launcher, I installed the awesome Material-based theme from the Samsung Theme Store, and I ditched Samsung’s (admittedly good) keyboard for the default Google Keyboard. Maybe I’m a purist (in fact, I probably am, because I think Samsung’s keyboard might actually be better), but the phone becomes infinitely more usable to me the closer it gets to feeling like a Nexus device. Thankfully, this is Android, and you can do that.

Check out our video review:

To sum it up, this is a Galaxy S6 with the Active Key shortcut button, no fingerprint sensor, two physical multitasking and back buttons, an awesome 3,500 mAh battery, IP68 water and dust proofing, and some added thickness and weight. I can’t really make a recommendation for this phone comparing to the other flagships of the year, because it’s really made for a specific subset of users. If you would prefer to have a durable Android handset with a much better battery and don’t mind the added bulk and lack of a fingerprint sensor, this is certainly the handset for you. Software is a little bit of a compromise for stock Android fanboys like me, but most probably wouldn’t care.

Just like we said of the Samsung Galaxy S6 and S6 Edge, this is definitely the best “Active” phone that Samsung has ever made. It has better software, a beastly battery, and not having to worry about damaging your phone can be extremely valuable if you want a phone with the power of a 2015 flagship that’s as close as possible to the durability of a Nokia brick. And for not all that much added cost on top of a standard S6 — just $10 when you buy off-contract through AT&T — this might just be the perfect option for you. It’s not the phone I want to use on a daily basis, but that doesn’t mean that it’s not an awesome phone.