Today we’re taking a look at something you’ve been waiting for… This is the OnePlus 2. We’re going to be unboxing it, taking a look at the hardware, features, and some camera samples, and I’ll give you what I like to call a “mini review” based on my initial time with the device…

The packaging is pretty different this time around, representing a traditional style phone box, but still has some OnePlus flair to it. Lifting the lid on the box will reveal the OnePlus 2 inside of a protective plastic wrap, with some printed details about the phone, but we’ll put the to the side for now.

Beneath the OnePlus 2 we have a small packet filled with some documentation such as a quick start guide and probably some other stuff you won’t pay attention to. At the bottom of the box, you’ll find a USB to type-C cable that will be used to charge up the device and a power brick, but we’ll touch on that more a little later.

As you can see the design here is a bit different from the OnePlus One. In hand the device has a great feeling in the hand and a solid build all around. Compared to the OnePlus One, the build is much better and even though we still have a Sandstone cover on this specific device (shown in the video), the back covers are interchangeable and much easier remove. There’s a wide variety of choices available at launch as well, but if the options are not your thing you can always pick up a skin to change things up a bit.

Check out our unboxing and first impressions video below:

Under that back cover you’ll find a dual-nano SIM card slot, but unfortunately no Micro SD expansion or removable batteries here, but the internal 3,300 mAh battery inside should be good for a day of use. As for storage, the OnePlus 2 is available as a 64GB model at launch, but there will be a 16GB model launch soon.

Around the front side you’ll find a 5.5-inch 1080p display that’s superior over last year’s flagship killer. With a claimed brightness of 600 nits and 401 ppi covered by Gorilla Glass, the display may not be Quad-HD, but I’m perfectly okay with that. It’s crisp, bright, and will not disappoint. The graphics are powered by an Adreno 430 GPU paired with the Snapdragon 810 packing 1.8GHz Octa-Core CPU, and 4GB of RAM. 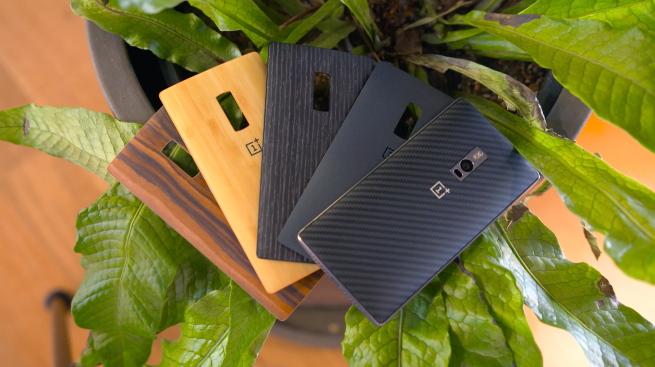 Along with new internals and design, we have a few exciting new features here. First up is the button layout at the bottom. As you can see, there’s now what looks like a home button in the center, along with two capacitive buttons marked with a simple dash on each side. While software can swap the functionality of these buttons, they simple work as your back button and multitask switcher card view. The home button has a built-in fingerprint sensor as well, but it’s not necessarily a button. It’s a capacitive sensor like the rest, but can be used to lock/unlock the device with your fingerprint. The fingerprint setup process is very simple to do within the Settings app and using it was pretty spot on in my brief testing while shooting this video. Simply place your finger on the home button and you’re in. 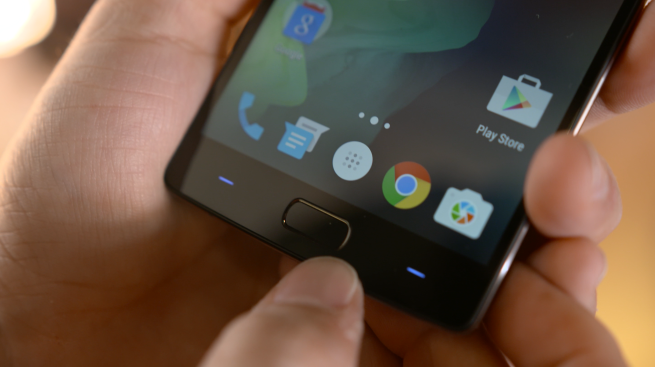 Around the outside of the device we have an aluminum frame that really provides a solid grip in the hand. On one side you’ll find the volume rocker and lock button, while the other side is home to a new Alert Slider. This new switch will shift between the various alert modes within Android. It’s a pretty helpful little three stage switch and works regardless of the phone’s locked status.

Taking a look at the camera, we have a 13-megapixel sensor which is the same in resolution as the OnePlus One, but we some extras on top. The OnePlus 2 features optical image stabilization and laser auto focus to improve stability and focusing time for photos or video. Speaking of video, the camera is capable of shooting up to 4K UHD video and the optical image stabilization works great for handheld shooting.

Check out the full photo gallery if you’d like to check it out, but overall the camera performed much better than I expected. Parts of photos were slightly blown out and things were a little too sharp, but I was using an early software build and I’ll save my comments on the photo and video quality for the full review.

As for software, the OnePlus 2 is running Oxygen OS which I took a look at a few months ago and if you’ve like to see an in-depth overview of that, I’ll leave a link below for you. There’s not much different from what I showed in my Oxygen OS review, but OnePlus has added a new “Shelf” side screen that will be home to your recently used apps and contacts. It’s pretty cool, but if it’s not your thing you can easily disable it.

Like I said, this device ships with a USB Type-C cable that’s fully reversible on both ends and on the bottom of the OnePlus 2. USB-C may not be completely necessary, but it’s nice to see companies hop of board with the future of mobile connectors.

As for pricing and availability, the OnePlus 2 will set you back just $389 for the 64GB model and you can order it starting on August 11th. The 16GB model will run ya $329 and all of the different back cover styles will be available at launch as well. This is said to be the 2016 flagship killer, but has OnePlus earned your loyalty?