Review: The OnePlus 2 is an integer away from the perfect flagship killer [Video] 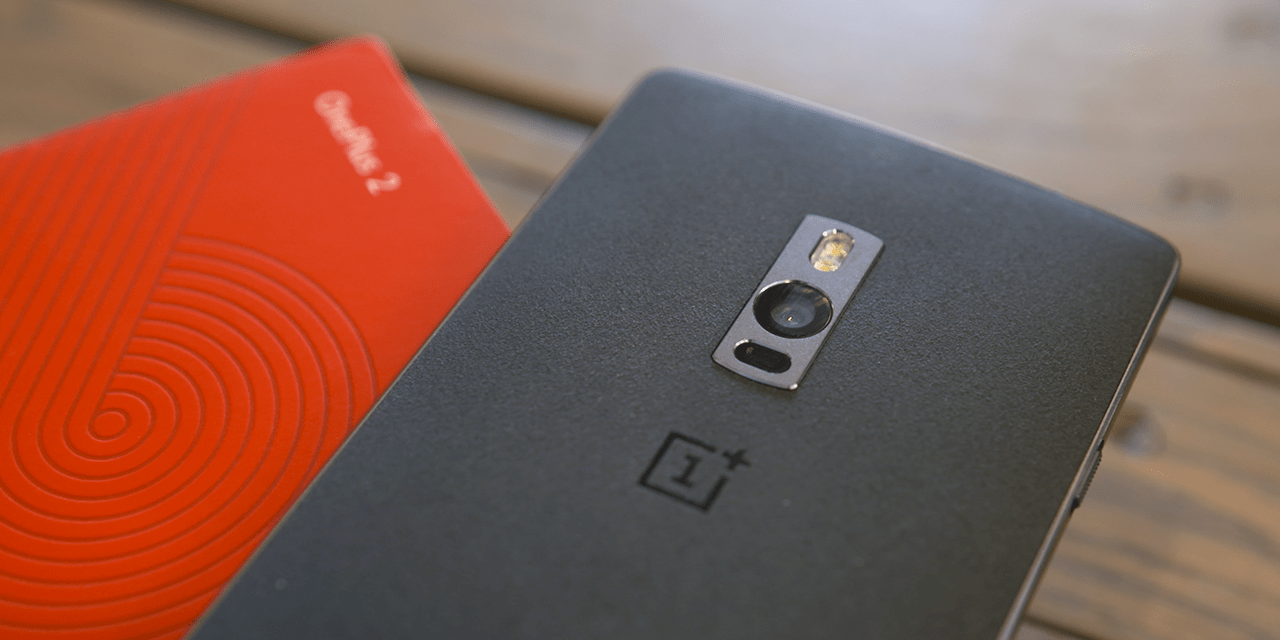 It’s no surprise that the OnePlus One was a huge hit. Flagship specs at a mid-range price wasn’t something normal for the mobile industry. OnePlus made waves with this “flagship killer’s” announcement more than 15 months ago, and now its much-anticipated successor is available for purchase (if you can get your hands on an invite), but does the OnePlus 2 live up to the hype? Let’s go ahead and find out…

Like last year’s “flagship killer” you can’t just buy one unless you’re willing to overpay for it. There are a few things that really need to be discussed here: design/build quality, hardware/software performance, and camera quality. Just in case you’re interested in raw specs, the OnePlus 2 features a Snapdragon 810 processor, 3/4GB of RAM (16/64GB models), and a 3,300 mAh battery.

Check out our OnePlus 2 review video below:

Also be sure and check out our OnePlus 2 unboxing video and comparison to the OnePlus One here.

This year OnePlus has stepped up its game as far as design and build quality is concerned. The OnePlus 2 has been changed for the better. The metal frame makes a huge difference in your hand. It feels very premium compared to its predecessor. Around the side you’ll find the lock button and volume rocker, while the other side features a new 3-way Alert Slider. This will allow you to easily flip between Android’s alert modes.

I’ve found the slider to be very useful, but it’s operation is a bit backwards. Slide it up to silence everything but alarms, to the middle for priority notifications, and all the way down for all notifications. Just seems like it should be flipped.

On the back side you’ll find OnePlus’ signature Sandstone finish. I’ve always been a fan of this as it adds some extra grip. Like it or not, each device ships in this flavor, but easily customizable with the new StyleSwap covers available, and OnePlus has made it easier than ever to remove the back cover. If you’re interested, StyleSwap are available from OnePlus for $26.99. 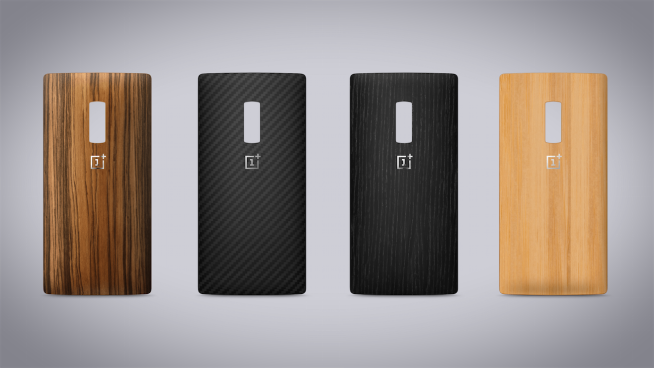 Under that back cover is a dual-nano SIM card tray that can be very helpful for traveling, but there’s no Micro SD card expansion here. Each side of the tray is capable of an LTE connection and the SIM card customization options are very handy. You can specify which card is used for SMS, voice, and data within the Settings app. Something I’ve found to be incredibly useful. You can basically mix carriers and create the perfect connection depending on the area you’re in.

There’s also a new camera on the back, but don’t expect extra megapixels here. The OnePlus 2 features a 13-megapixel rear shooter and dual-LED flash, but with some perks like optical image stabilization and laser auto focus. Finally, on the front side we have a 5.5-inch 1080p display, which is the same in size and resolution as the OnePlus One, but that’s not really a bad thing. This display is definitely batting for #TeamCrispy and as far as clarity goes, OnePlus has knocked it out of the park. The display gets very bright (up to 600 nits according to OnePlus), but at higher brightness levels, the colors seem to get washed out a bit.

Along the bottom end of the display we have two capacitive navigation buttons for back and recent apps which can be swapped via the settings. On-screen buttons are still a thing if you prefer them and all of the capacitive buttons can be customized to launch various actions using a long press or a double tap.

In the middle of the two navigation buttons you’ll find a capacitive home button that doubles as the OnePlus 2’s fingerprint sensor. I’ve been quite satisfied with the responsiveness of the fingerprint sensor. It’s very fast with minimal errors in my testing, but it’s only here as a lock screen security measure. Since the OnePlus 2 lacks NFC, unfortunately you won’t be using it for mobile payments. All of that aside, OnePlus has nailed the fingerprint tech inside of this beast and I’ve found it to be very reliable and quick. 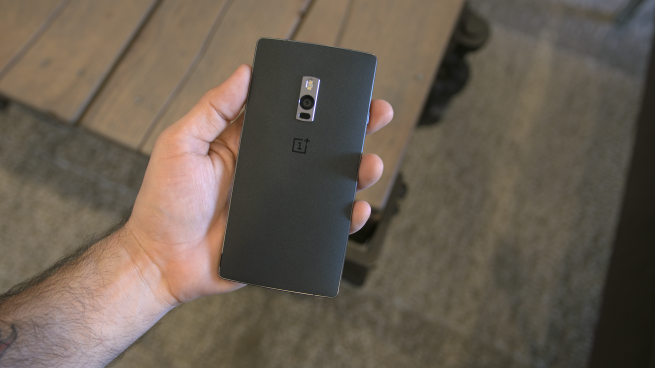 If software customization is your thing, you won’t find much of it here compared to other Android skins. Oxygen OS is based on Lollipop and designed to be a clean-cut Android experience, and it delivers on that promise with minimal skinned elements. Oxygen OS has been buttery smooth for me, with only a couple of instances where the device decided to lock up during use. I haven’t had any overheating issues with the processor and everything performs just as a near-vanilla version of Android should.

To the far left of the home screens you’ll find a new Shelf feature (see video for example) that will display your frequent apps, contacts and is even customizable to show mini widgets which don’t necessarily fit properly all of the time but will work in a pinch. If you’re not a fan of the Shelf feature, it can easily be disabled within the home screen settings. 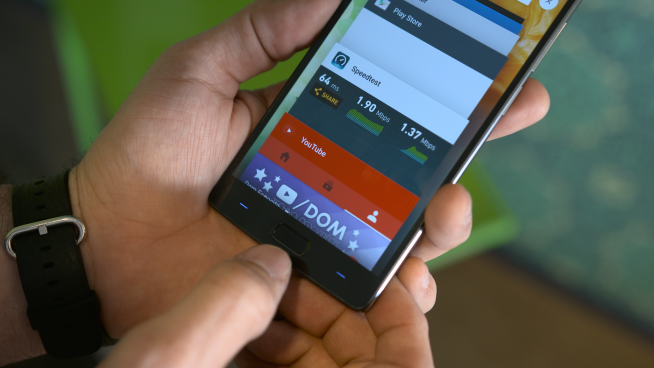 Other personalization options include customizable LED colors for different notification types, which is always a nice option to have, and even a system-wide Dark Mode which is easy on the eyes in dark environments, applies through menus and the app drawer and just looks cool.

Gestures have been carried over from the OnePlus One as well, but there’s really nothing new here. If you’d like to see a full walk-through of Oxygen OS, check out our post here, but one added extra is the ability to pull down the notification shade by swiping on any open space on the home screen.

As for camera performance, this is somewhat of a mixed bag. The 13-megapixel shooter holds up as I thought it would thanks to the larger 1.3 micron sensor and f2.0 aperture, but the camera app can be slow at times. Photos come out sharp and colorful, but it sometimes proves difficult to expose properly under certain conditions. 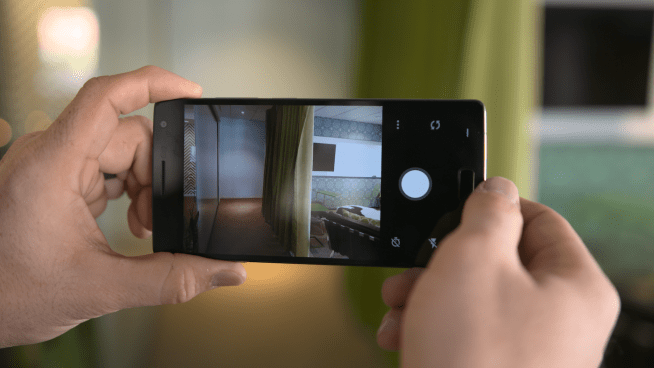 The laser auto-focus works great in most conditions and is definitely a strong point here in the camera department. In the future, the OnePlus 2 will be receiving an update that will bring along a manual mode, but unfortunately that wasn’t ready at the time of this review. The front side 5-megapixel selfie shooter performs pretty great in my testing as well.

Check out our OnePlus 2 photo gallery below:

Along with that, it’s great having optical image stabilization to work out the kinks in handheld photo and video recording up to UHD resolution. The OnePlus 2’s camera definitely won’t be killing all of the flagships throughout 2016, but it’s hard to argue with the quality at its price point.

As for battery life, with its 3,300 mAh battery the OnePlus 2 on average had screen-on times of around 3.5-4 hours which I thought was pretty good. It definitely had no problem lasting through my average day, but for you bright screen power users out there, it may require some additional charging at some point in your day. The bad news is that the OnePlus 2 does not feature Quick Charging or wireless charging capabilities. 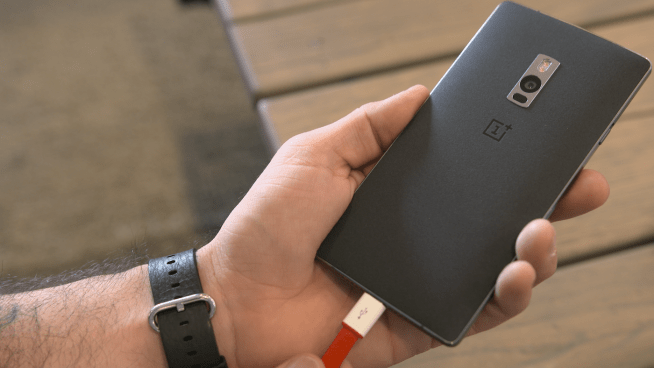 On top of that, it features a USB type-C charging connector which is great as far as future-proofing goes, but unfortunately it means that all of the Micro USB cables you have laying around will be useless without an adapter. Don’t get me wrong, USB-C is cool and all, but I just don’t see the benefit in this case. Also those grilles on the bottom cover up the single mono speaker and microphone. Speaker quality is decent, but I would have loved to see front facing speakers this time around.

At the end of the day, the OnePlus 2 is a great buy, though there is some tough competition in this space right now. Starting out at $329 for the 16GB model, it’s hard to pass up, but for just $60 more you can grab a 64GB model. That’s assuming you have an invite to buy one. Its lack of NFC, wireless charging, Quick Charge 2.0, and expandable storage may be a deal breaker for some, but it’s not the end of the world in my opinion. This is a fantastic phone. It feels just like a flagship should. The build, weight, and quality is far beyond its predecessor. There were obvious corners cut to bring this smartphone to life, but they are all compromises that I’m personally okay with. Can you live with them? If not, you may want to another year or so until OnePlus 2 equals three. Be sure to check out our video review above for a closer look at the OnePlus 2.