According to SamMobile‘s list of models, the model ending W8 is heading to Canada, while the ‘F’ model is the unlocked European version. Both are presumed to by Exynos-powered models due to the tests indicating 8-cores in the processor, rather than 4. For those unaware, the new Snapdragon 820 is ‘only’ quad-core, while Samsung’s competitor, the Exynos 8890 is an octa-core chip.  Also, it’s been rumored for some time that the Snapdragon models will only be available in the US and China.

The Geekbench listing suggests we’re going to see a powerful smartphone from Samsung. With a single-core score of 1873, it’s over 500 points ahead of the Galaxy S6 and S6 Edge and its multi-core score is higher than anything out there currently.

Apart from seemingly confirming the existence of Exynos-powered models, the leaks don’t tell us anything we didn’t already know. We’re expecting a smartphone with a QHD resolution 5.1-inch/5.2-inch display, 4GB RAM and 64GB storage with an advanced 12MP camera sensor featuring Samsung’s BRITECELL technology. It’s also expected to ship running Android 6.0.1 and come with a larger battery than last year’s Galaxies. We will also more than likely see a pressure sensitive display, similar to that found on the Huawei Mate S and iPhone 6s/6s Plus.

It’s predicted that Samsung will announce the S7 and its curved-screened counterpart(s) at an event right before MWC 2016 in Barcelona next month. At which point, we’ll find out officially how many of these early rumors have been true, and what’s just wild speculation. 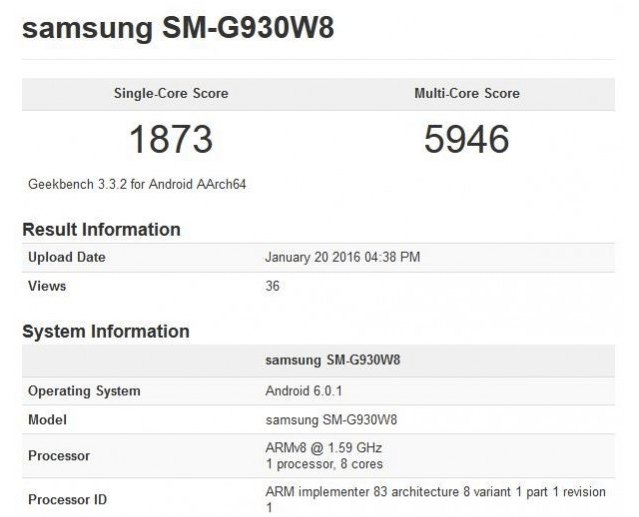