Today marked the release of the first Android N developer preview, and factory images are now available if you want to install the update on your device. If you’re anything like me, though, you would rather not completely wipe your daily driver (Nexus 6P, in my case), just to get some hands-on time with some buggy software. That’s why we’ve compiled this huge list of new features and a gallery of Android N screenshots for your perusal…

The obvious flagship feature with this release is the addition of split-screen multitasking for phones and tablets. Google’s calls it multi-window support, and it allows you to run two apps at the same time in one of two modes: side-by-side or one-above-the-other. You can resize the apps by dragging the divider between them, a function familiar to anyone that has used split screen multitasking on the iPad or on a Windows device.

Curiously, Google has also added picture-in-picture support for some devices. I can’t seem to find any apps that support the feature at the moment, but it seems that it’s only for Android TV devices anyway. With this feature (which, again, works a lot like it does on the iPad), apps can “continue showing content while the user browses or interacts with other apps.” 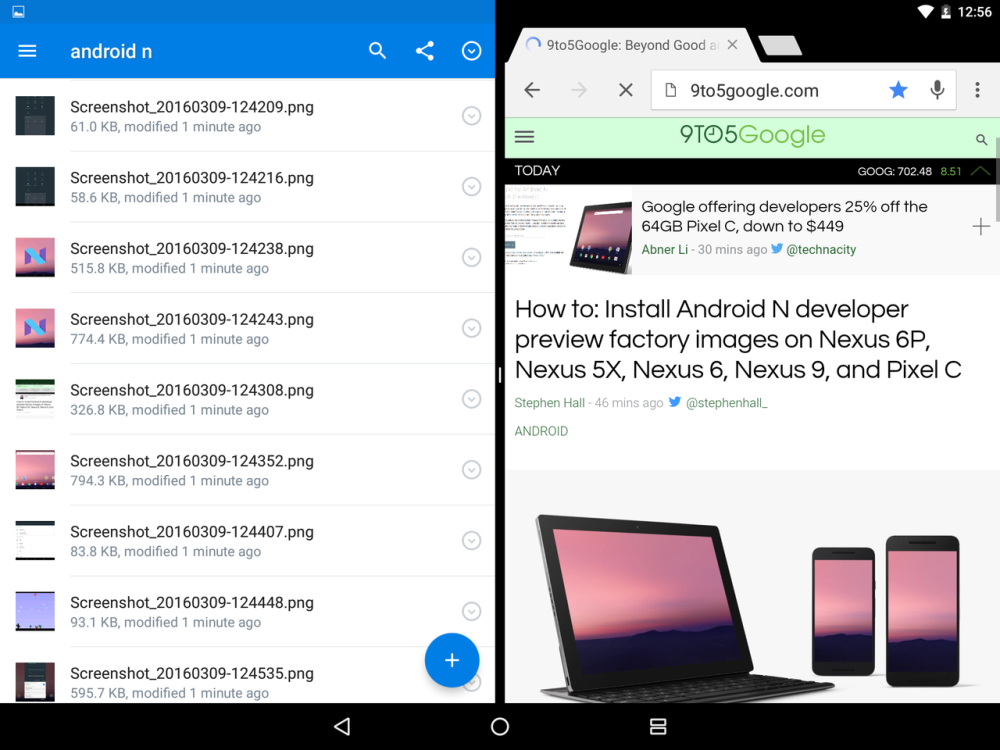 Another big new feature with Android N is the introduction of a brand new notification drop-down menu. Previous leaks showing the redesigned notification shade are spot-on accurate. The new shade has bundle-able notifications that span the full width of the screen (on phones), quick toggles at the top of the notification shade (including those for Wi-Fi, cellular, battery, Do Not Disturb, flashlight, and a dropdown button), and a new edit button that lets you make changes without having to use the System UI tuner from Android M. You can also now apparently reply to messages directly from the notification for some apps. 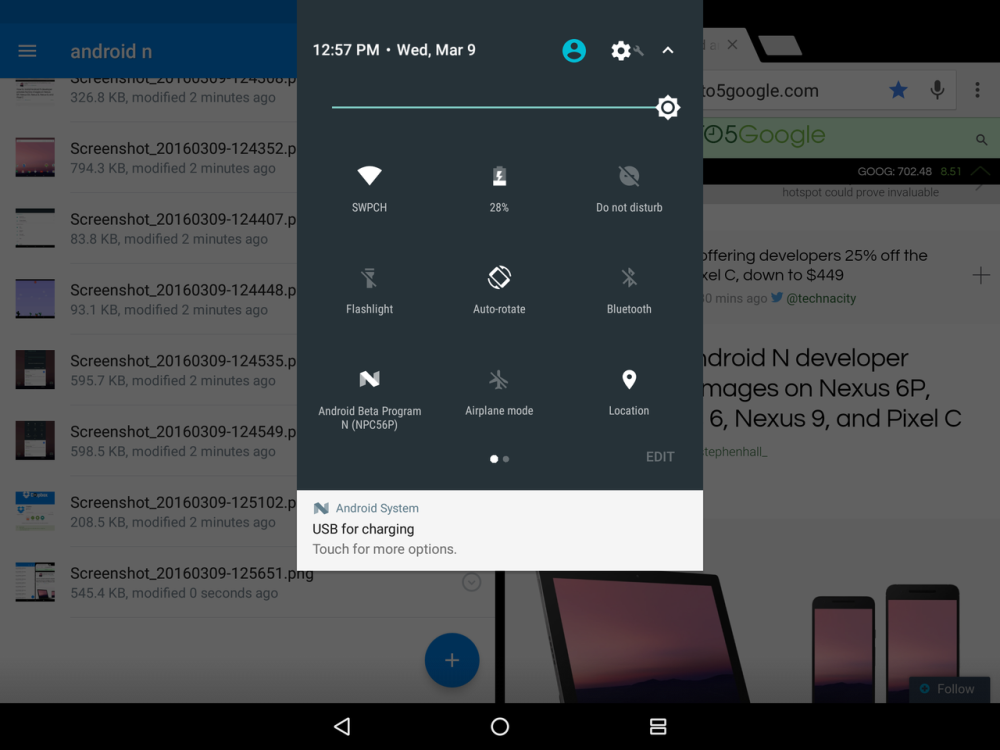 Here’s the full list of new features (via Google):

In Android N we’ve redesigned notifications to make them easier and faster to use. Some of the changes include:

The third tentpole feature for Android N come in the form of many enhancements for Android’s Doze power-saving feature.

Now in Android N, Doze takes a step further and saves battery while on the go. Any time the screen is off for a period of time and the device is unplugged, Doze applies a subset of the familiar CPU and network restrictions to apps. This means users can save battery even when carrying their devices in their pockets.

Night mode is back 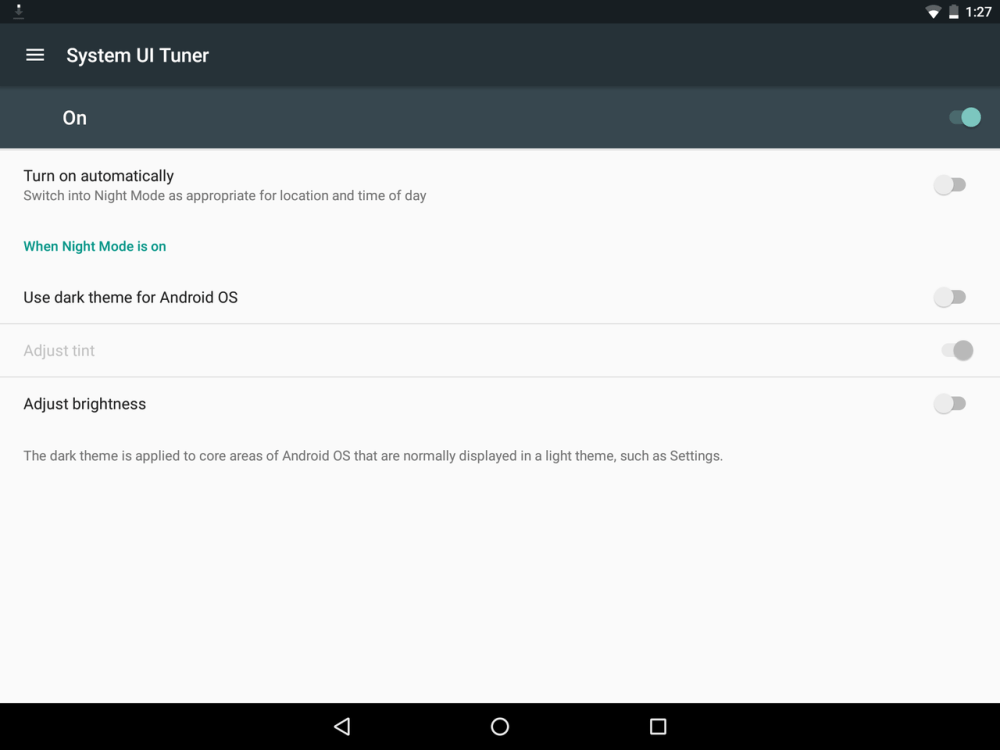 Android M’s original developer preview hinted at a “Night mode” feature, but it was removed before Android Marshmallow went prime time. With Android N, Night mode is back, and it’s a lot more fleshed out than it was before. Once you head into the Night mode pane in the System UI Tuner settings, you’ll see a plethora of options. Enabling the feature will immediately change the tint of the screen system-wide, much like the Twilight app or F.lux.

You can change a lot of settings from the Night mode menu including “Turn on automatically” (which, as its name suggests, will switch your device to Night mode depending on the time of day), but other options are under the “When Night mode is on” header. Here you’ll find options for “Use dark theme for Android OS,” “Adjust tint,” and “Adjust brightness”. 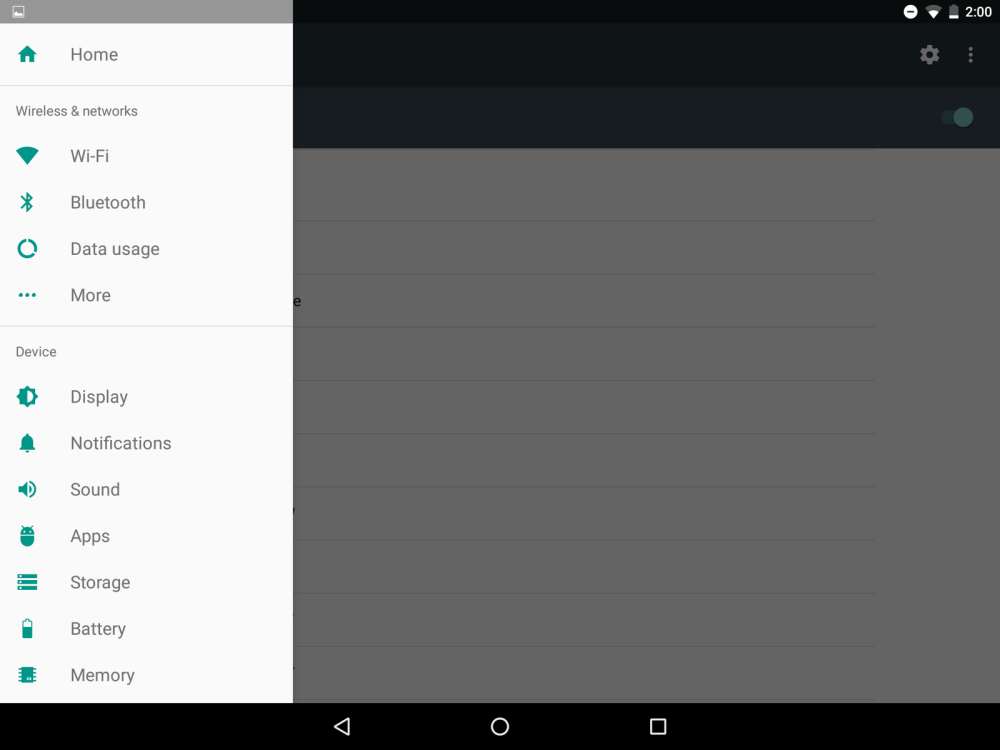 As was leaked previously, the Settings app has gotten a bunch of new features and a new UI. First up is a new hamburger menu. When you navigate at least one level deep in the app, you’ll now see a hamburger menu in the top left rather than a back button. This menu lets you either quickly navigate to another Settings menu or go “Home” which takes you to the top level of the app.

Upon first opening the app you’ll see a new “Suggestions” section at the top of the app. This is used to remind you to do things like set a password for your lock screen or change your wallpaper to customize your device. You can tap a 3-dot drop down to hide these suggestions, and you can hide the suggestions section as a whole as well. You’ll also notice that the top of the app lets you know about settings you might want to disable (in this case, the app tells me that Do not disturb is on, and gives me a quick option to disable it).

In Android N, there’s also a new option called “Data Saver” to keep your data usage low if you’re in a pinch (and don’t want to trip that next $10 on your cellular plan, for example). This feature will block background data usage, but also notifies apps that are using data in the foreground to keep things to a minimum. The ConnectivityManager API can now be used by apps to see if the Data Saver feature is enabled, and Google has also added the ability to granularly control which apps should and shouldn’t be affected by the feature.

New gestures for the Recents button

With Android N, there are several new gestures that you can perform using the Recents (square) key. As noted by Android Central: There’s just one new wallpaper in this preview, but I’d say to expect a few more by the time the final release rolls around later this year. You can download the wallpaper in 2331 x 1920 here, and in 2880 x 2560 here.

Apps like Google Messenger and Hangouts already allow you to reply to incoming notifications inline without having to jump into the app. In the past, developers would have to build out their own implementation to get a similar feature. Android N now has a new Direct Reply API that allows developers to easily add a ‘reply’ button to notifications for any app.

Additionally, as we mentioned above, Android N bundles notifications from the same app together, similar to Android Wear. With a two finger gesture, group notifications can be expanded into individual notifications and dealt with separately.

You can show new icons in the Status Bar and there are new settings for Battery and Time. By default, battery percentage is only shown when charging, but there is now an option to get rid of the icon completely. You can also completely remove the time from the status bar or have seconds show alongside hours and minutes.

Under “Color and appearance,” you can activate the Night mode and calibrate the display. Tapping the latter brings up RGB sliders to fine tune the screen. In Night Mode, you can set it to turn on automatically and have it adjust tint and brightness. Settings for “Do Not Disturb” allows you to show the control when changing the volume and turn off the volume buttons shortcut to activate it.

Lastly, in Other, you can enable a split-screen by swiping up from Overview/Multitasking button. With this option, you can slide up in an app to split-screen it. It’s much quicker than going into the app switcher to manually select what apps you want side-by-side. Other options allow you to disable fast toggle and to show full importance settings.

The dialogue box that appears after an app crash has been slightly redesigned in Android N. Previously, users just had the option to close or send feedback. There is now an option to restart the app. If the app continues to crash, it will provide a reset and restart option. This feature could possibly be limited to the Developer Preview.

Android N provides more control over the behavior of notifications. Tapping and holding on a notification reveals controls to: show notifications silently, block all notifications, or don’t silence or block. Users can get even more options by turning on full importance settings in the System UI Tuner.

Android N screenshots from the Nexus 6: