Google Wifi Review: A great user-friendly router for your home, even if you buy just one 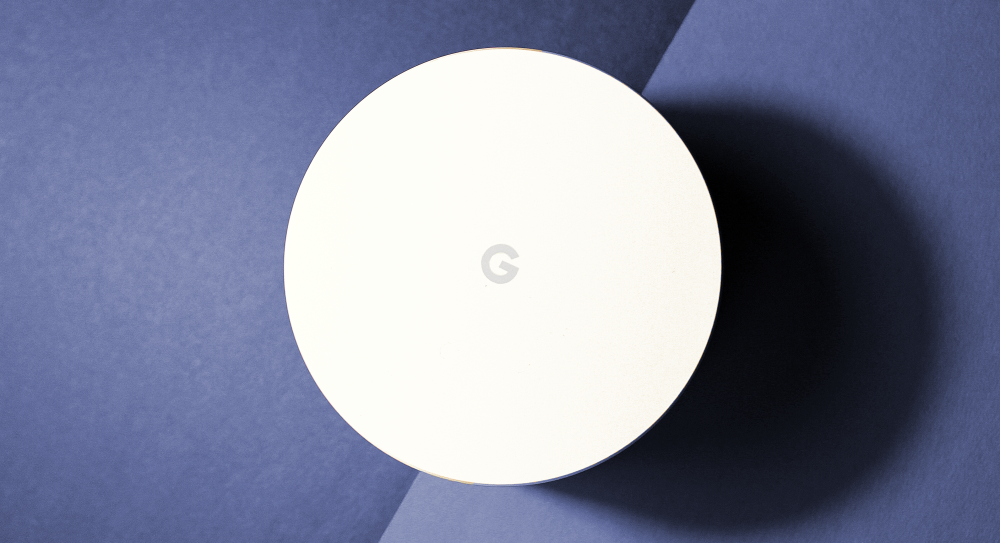 I typically review Android phones, so looking at Google’s new non-phone products this year — including its Daydream VR headset, Google Home, and now Google Wifi — has been a nice change of pace. Over the last month, though, these posts have only gotten further and further from being phone reviews. The Daydream View uses an Android phone to function, while the Home is an always-listening Chromecast without the screen — although it functions very similarly to using Assistant on the Pixel.

The Google Wifi, as you probably already know, is a router. It’s what Google hopes will replace that little gray box that probably sits in the corner of your office, collecting dust since the cable guy came a couple years ago. Thankfully this isn’t just any router, though. This is the successor to the OnHub, and that means we get an attractive design, as well as a delightfully user-friendly app that lets you “set it and forget it” if you want to, but puts all the most important features at your fingertips if you ever need them…

Let’s take a little trip down recent-memory-lane. It wasn’t that long ago that we were telling you about Google’s first OnHub, the company’s entrance into the router market. That platform (which included entrants from both ASUS and TP-Link) brought routers made in partnership between Google and OEMs — one of which was/is a well-known Android phone maker. Those routers were on the pricey end, somewhere in the range of $200, but they were a refreshing take on routers. They looked decent (Google wanted you to put it out in the open rather than under a desk, as to provide better signal coverage), and they shipped with the Google On app that made them super user-friendly. No more navigating confusing router settings menus.

Besides them having more than a dozen antennas, the app and user experience was what really made the OnHub a purchase worth considering, with lots of software features that Google added to make it possible for even the average joe to manage their WiFi network with ease. The OnHub just brought a lot — like making setup really easy, the ability to easily change passwords, prioritize bandwidth, and run speed tests all from your phone — that made it a fundamentally better experience than most other routers on the market. I and many others agreed that these feature adds weren’t necessarily worth the $200+ that Google wanted, but it seemed like an obvious path for a more affordable option to one day follow.

Enter Google Wifi, the fully-Google-made child of the OnHub experiment. This one is through-and-through Google’s router, and it has some notable changes compared to the OnHubs of the last couple years. It’s a lot smaller and more minimal than the previous two entrants — Google isn’t releasing any artistic covers to push you to put the new router on your kitchen counter. But Google isn’t giving up on its goal of better WiFi coverage either; this time, it’s all about automatic mesh networks using multiple routers. Entry is also a bit cheaper, starting at $129 for a single router and probably going down from there relatively soon. And a three-pack already brings them down to $100 a piece. 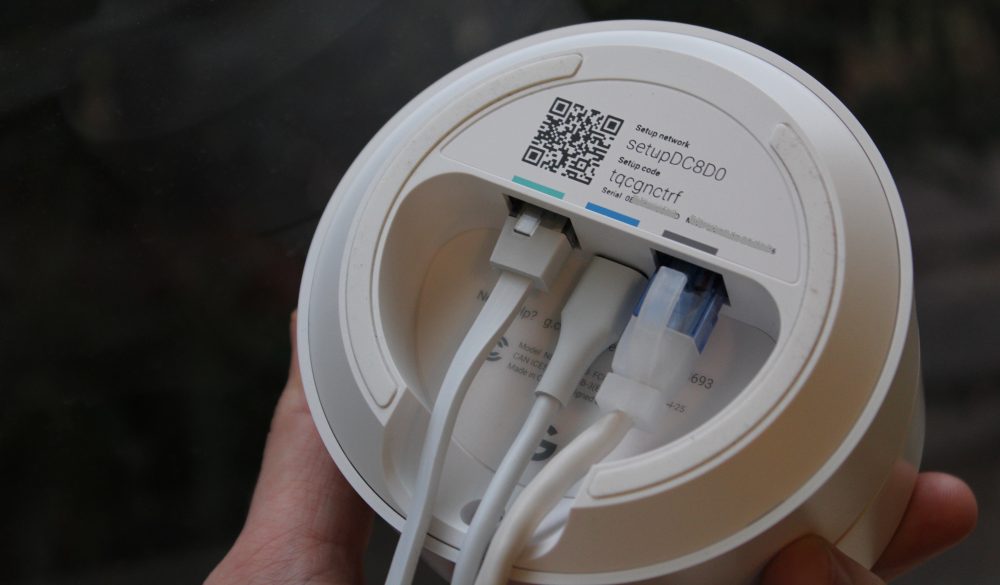 I could dive deep into the specs and performance and wireless transfer speeds and extensive reliability tests (and I probably will later to some degree — I haven’t even had the router long enough to test these things yet), but that’s not really what matters with this router. As long as you don’t totally cheap out on the router you pick (assuming you’re looking to buy one right now), it’s probably going to work just fine — pretty much any router at this one’s $129 price is going to do just as well if not better in performance. I mean, it’s a router. For most people, as long as they get a decent WiFi connection at a range that can at the least cover a small house, they’re good. And this one brings that.

As a normal person, I’m more than happy with what one single standalone Google Wifi router accomplishes. I have long had some problems with range — even in my small apartment — when using cheap routers, but that was immediately cleared up with the tiny Google Wifi. For me, that alone is a win, and I have a hunch that many people who are considering buying this router are probably upgrading from a lousy Linksys WRT-54G router from 2002. You’ll notice the difference, and the fact that the Google Wifi glows blue to show you it’s on and working is a bonus. 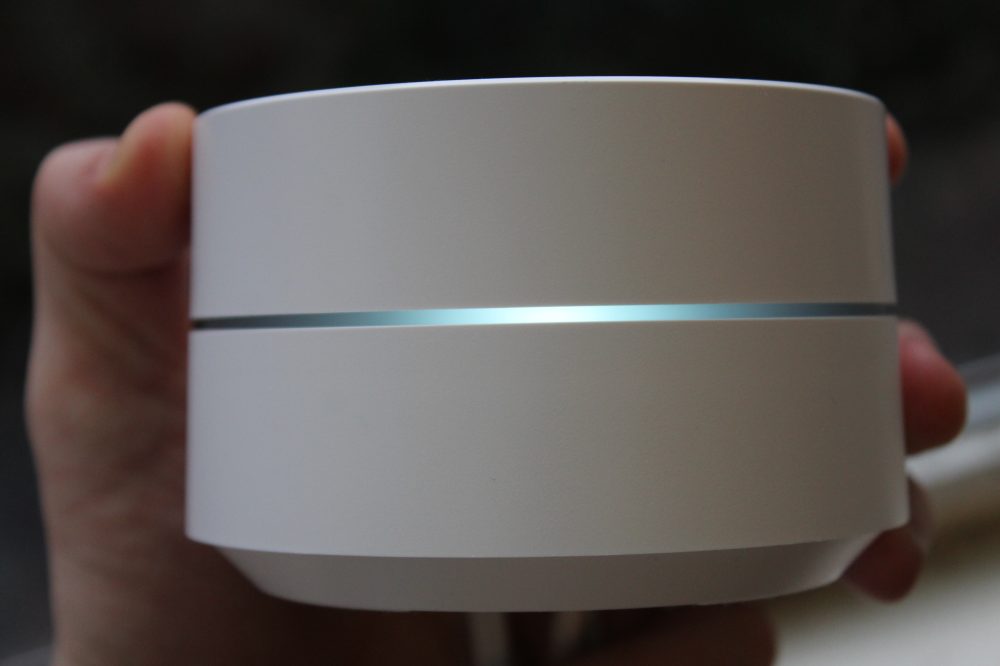 You can even adjust the brightness of this light.

In case you’re wondering about those specs, though, the Google Wifi router is a TX Beamforming dual-band AC1200 router. This means data speeds of up to 1200 Mbps, and that data is sent and received using both 2.4GHz and 5Ghz bands. The router supports 802.11a/b/g/n/ac, and — in case you care — it has 512MB of RAM and 4GB of eMMC flash. It’s also expandable via mesh networking, which, as I mentioned, allows you can connect multiple routers to automatically relay signal across a large home. The router has 2 Gigabit Ethernet ports per access point, and everything’s powered via USB-C. In terms of security, the Google Wifi uses WPA2, and Google says it also gets automatic security updates.

It’s just a good router, and my experience using it for a week didn’t raise any alarms — everything pretty much works as advertised so far as I can tell. Connectivity was consistent throughout the day without any noticeable fluctuations in speed, I didn’t have any downtime that resulted in me having to manually reset the thing (I’m looking at you, my decade old Netgear router that was long ago banished to the bottom of the closet), and it’s absolutely awesome having the ability to check up on the state of my home network by just opening the Google Wifi app.

With all that out of the way, let’s talk about that app. Google On, the app that previously powered OnHub routers, got an update last week to be renamed Google Wifi. But while there’s a new name and a new icon, the app itself isn’t all that drastically different. You can use it to set up your router initially, but even after you do, you’ll probably go back for more eventually. There’s a page that has cards that give you an overview of your network and make suggestions to improve your experience (like setting up Guest WiFi, for example), there’s a page for showing the status of connected devices, and then there’s the settings and shortcuts menu for all the useful things.

“Network check” can come in handy if you’re having problems with internet on any of your devices. It lets you check both the internet connection coming into the router itself and individual device WiFi strength. You can also quickly prioritize a device from this menu, as well as show your password (in case you need to give it to a friend), and activate Family Pause (which lets you shut down the connection at certain times of the day… to keep your kids off of YouTube at midnight). Finally, you can use this menu to tinker with network settings (like change your WiFi password), configure Guest WiFi, and configure On.Here so that people connected to your network can control devices in your home.

There’s a lot of features here, but to me it’s not really about the features themselves. Routers from various brands have been able to do much of this and more for a long time, but Google Wifi makes it just stupid easy. Literally anyone can learn to use this app, and on top of that, the app can be used from anywhere — you don’t even have to be at home. Just like the Pixel, too, Google offers 24/7 “Wifi care specialists” to help you with any problem you might have. So as long as the problem isn’t on your ISPs end, there’s no reason the Google Wifi wouldn’t reliably pump out a great connection throughout your home.

One of this router’s biggest claims to fame is its automatic mesh networking capabilities, which basically allows you just plug in three of these around your house and automatically give every corner the best WiFi coverage possible. Unfortunately I haven’t been able to test that yet, but I’ll be back in a week or so to share my thoughts. I would really love to test these out in a 3,000-4,500 square-foot house, and I’ll be able to do so later this month. I did try quickly connecting these three routers in my apartment, though, and it seemed to work as expected. So far, so good.

The real question is whether this $129 router by itself is worth it when, for most people, an ugly $50 AC1200 dual-band router from Linksys or Netgear will work just fine after it’s set up. That’s for you to decide, but I think the situation changes when you have multiple of these. Is the single router the best value possible when you just look at the spec sheet and the price tag? Maybe not. But let’s not forget that eero, one of Google Wifi’s closest competitors in consumer mesh networking, charges a whopping $500 for a three pack — or $200 for a single router. Compared to that, Google Wifi is a steal. I’m expecting that when I get a chance to see these in auto-mesh action, I’ll have a lot more to say.