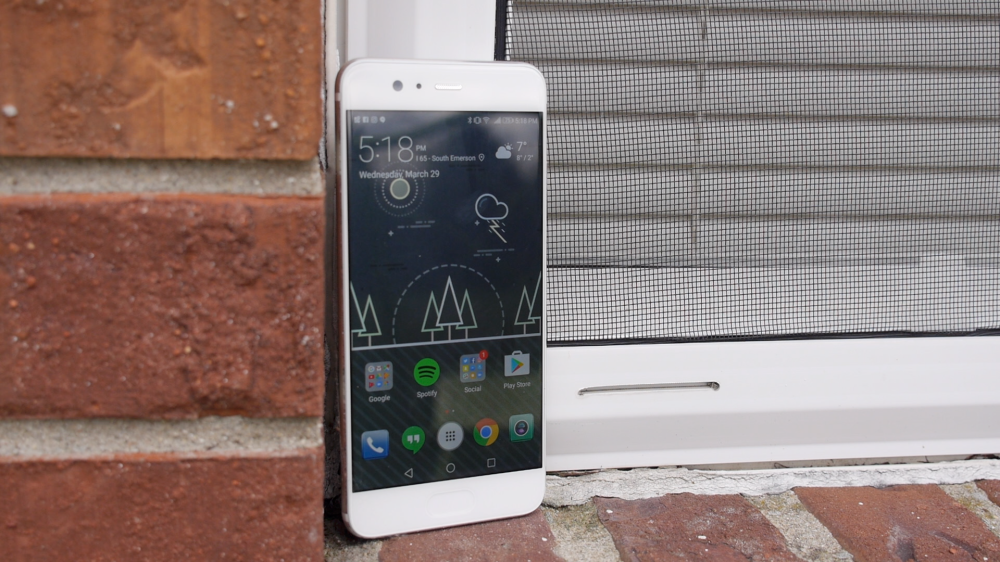 Every year, reviewers and tech bloggers have all the same things to say when a new Huawei phone comes out; great hardware and camera performance brought down by less than ideal software. Last year’s Mate 9 attempted to address the software complaints a bit with a new version of the company’s EMUI interface, but with a screen at 5.9-inches it was too big for a lot of consumers.

The P10 is Huawei’s latest flagship — in essence a smaller Mate 9 with a more comfortable design — but is it enough to stand out against this year’s aggressive competition?

The P10 is surprisingly compact. With a 5.1-inch 1080p LCD display and average-sized bezels above and below, it’s about the same size as phones like the Galaxy S7, iPhone 7, and LG G5. The body is more rounded and comfortable than the P10’s bigger brother the Mate 9, and thanks to its aluminum unibody design it’s less slippery and fragile than phones with a glass back — though as always, a metal back means no wireless charging.

Thankfully the P10 does feature fast charging through its USB-C port, and to its sides are a 3.5mm headphone jack and a speaker grill. As is always the case with bottom-firing speakers, it’s tinny and easy to accidentally cover with a finger, but it puts out a decent amount of volume. 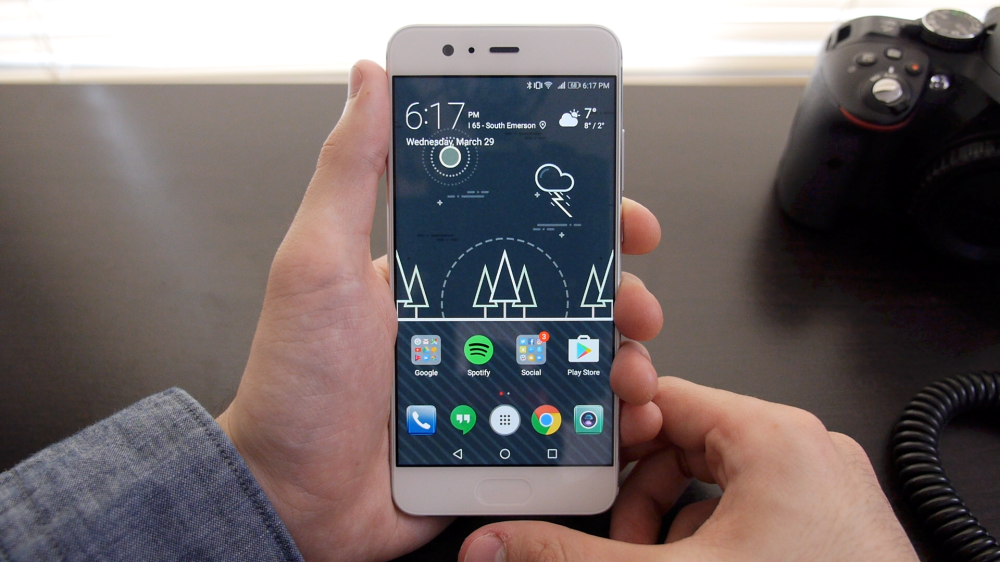 Fingerprint sensors have always been a strong point for Huawei. Just as we’ve seen on the Mate 9 and other Huawei devices, the P10’s sensor is lightning fast and accurate (even faster than Apple’s Touch ID), though unlike its predecessors the P10’s fingerprint sensor has been moved from Huawei’s typical placement centered around the back of the phone. It’s now located on the front beneath the display in Apple and Samsung fashion, and while some may find this positioning preferable, it feels like wasted space given that it doesn’t function as a button — at least, not by default.

Should you want to navigate the P10 using the fingerprint sensor, Huawei has tucked an option into the settings to eliminate the on-screen controls entirely and instead navigate the phone using a series of gestures on the sensor: tap to go back, press and hold to go home, and swipe from right to left for recent apps. It works well enough for the most part, though you do lose the ability to run split screen apps, which is usually triggered by a long press of the recent apps button.

The P10’s IPS LCD display looks fairly sharp with a 1080p resolution, and it’s protected by Corning Gorilla Glass 5. Colors look rich and saturated, but it’s a bit cool-toned by default —thankfully there’s a setting to adjust color temperature. The big problem with the display is its lack of an oleophobic coating.

Nearly every phone has this to combat finger oils to keep the display looking clean, but on the P10 your only protection is the preinstalled plastic screen protector. It’s nice that it comes included with the phone, but those that prefer the feeling of glass to plastic may be disappointed. The P10 offers Huawei’s best software experience ever, running the company’s own EMUI 5 overtop Android 7.0 Nougat. As previously mentioned, Huawei has received a lot of flack for its user interface over the years, but EMUI 5 (first introduced on the Mate 9 and Honor 5X) offers much better performance than before, and adds some nice features as well — most mentionable is the long-requested option to enable an app drawer to the home screen.

Nougat enables natively running two apps simultaneously in split screen view, and the Kirin 960 chipset and 4GB RAM ensure that you’ll run into no performance troubles. One thing to note is that there’s quite a lot of bloatware and preinstalled apps on the P10. Luckily most can be uninstalled, and they’re not all bad — Huawei partnered with GoPro to include its Quik video editing software.

There are still some annoyances with using the P10 though. It may be a problem with the software or the display, but it seems to struggle with swiping gestures. Dismissing notifications often takes multiple attempts, and I suspect that could be due in part to another problem with the phone: Huawei’s knuckle sensing technology is meant to help take screenshots, but it often leads to finger input being erroneously read as knuckles — this could be why it doesn’t always respond properly to swiping, and there’s no way to turn the feature off.

The P10 also has aggressive battery-saving features, constantly notifying you about power-hungry apps and reducing processing power at certain battery thresholds (though the latter is an opt-in feature, not default). This isn’t a bad thing, but it can be overly aggressive at times; far too often, Bluetooth will turn off on my phone after a few hours without a connected device, which is especially annoying if you step into your car after a day of work and it doesn’t automatically connect.

The cameras on the P10 make taking photos one of the most enjoyable experiences about the phone. There’s a Leica-branded dual camera layout on the back, consisting of a primary 20MP sensor and a secondary 12MP monochrome sensor that helps fill in detail and measure depth for artificial bokeh effects. There’s optical image stabilization built in, along with 4K video capabilities and many different photo settings and manual controls.

With an f/2.2 aperture the P10 takes in a good amount of light, though in darker environments it’s not quite able to keep up with wider aperture cameras found on phones like the Galaxy S7. Still, shots taken on the P10 are detailed and nicely saturated without looking unnaturally vibrant.

The artificial bokeh is fun and often looks more realistic than the portrait mode on the iPhone 7 Plus, and you certainly get more manual control than on the iPhone, but bear in mind that unlike Apple’s implementation the P10 doesn’t save an original/natural version of the photo, so you’ll want to use caution not to go overboard and drown a shot in blur.

In my experience, battery life on the P10 has been average to poor. Its 3,200 mAh lithium-ion battery matches or bests many other phones of roughly the same physical size, but in my three weeks of testing it’s never lasted a full day without needing topped up by the evening. Endurance will range depending on your exact usage, and EMUI’s power-saving features do help as long as you don’t mind the tradeoff in performance, but altogether the phone hasn’t quite met my battery expectations when compared to phones with roughly the same battery capacity like the Galaxy S7 or even the much cheaper Moto G5 Plus. 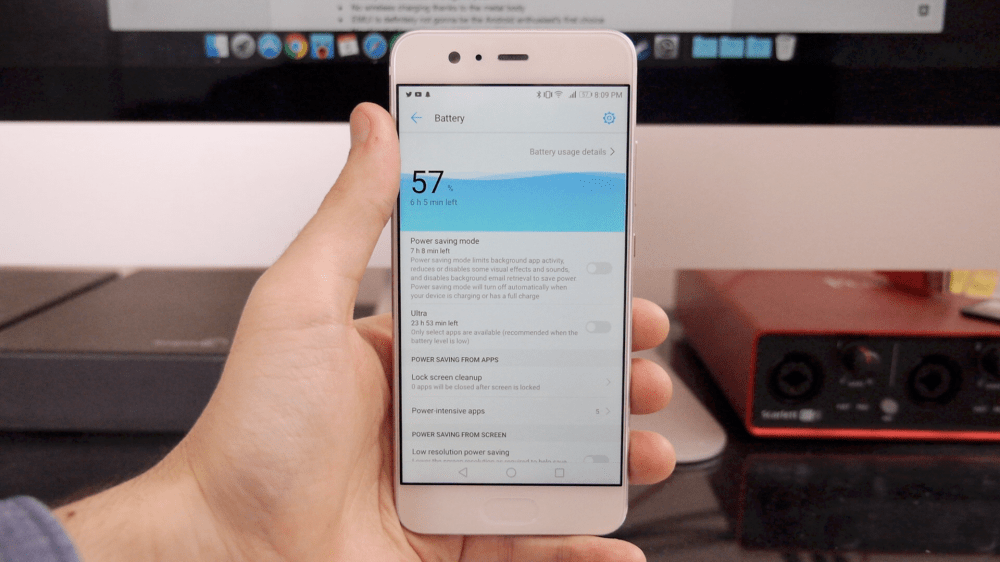 Unlike many other flagship devices these days, the P10 disappointingly wields no water resistance. Given its unibody enclosure and placement of all ports at the bottom of the device, it should be fine in the face of light rain or an accidental splash, but be weary not to jump in the pool with this phone.

The P10 feels a lot like most other Huawei phones. Its great hardware and excellent camera performance make it feel worth the money, but the software holds it back a bit and leaves it feeling like a good phone launching at a time full of great phones like the LG G6, Galaxy S8, and even the Honor 8 Pro from Huawei’s sister company Honor. A year ago, the P10 might’ve been a much stronger recommendation, but in 2017 it just doesn’t bring anything unique or remarkable to the table.

Basically, not much has changed since our first impressions: meh.