Following the release of Android 7.1.2 earlier this month, Google is beginning to push the update to Pixel and Pixel XL devices enrolled in the Android Beta Program. For the Pixel line, it addresses a number of Bluetooth, battery shutdown, and camera issues, as well as other improvements.

A number of Pixel and Pixel XL owners in the Android Beta Program began receiving the update earlier this morning. Devices on Verizon will receive version NHG47K and N2G47J for Deutsche Telekom subscribers, while unlocked phones will get N2G47E.

For the most part, there shouldn’t be any drastic changes between the last beta from March and the April 3rd release. However, Google has clarified what long-standing issues have been fixed with Nougat’s second maintenance release.

Early battery shutdowns have been addressed, while there is also a fix for the pink banding in the camera experienced by a “small number of users.” Meanwhile, Bluetooth connectivity complaints have been remedied, as has audio popping at higher volumes.

Other improvements in this version include better fingerprint swipe performance and battery usage alerts for apps in settings. The Pixel’s boot screen also adds a “Powered by Android” logo at the bottom.

Manually checking for updates in Settings should download the 30-40MB patch and begin the seamless update process. 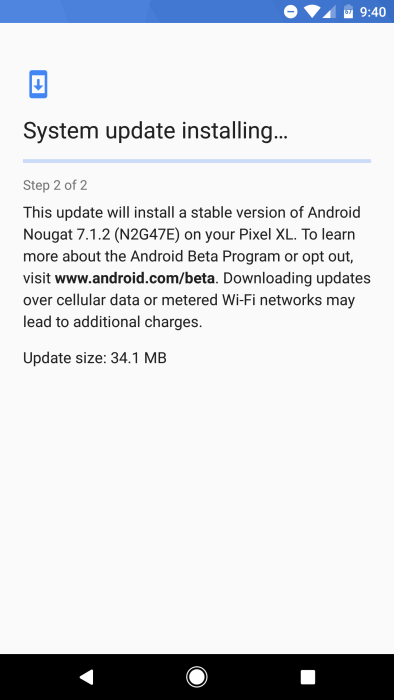