It seems like flagship phones get all the media coverage. Everybody wants to fawn over the latest superphones and see what crazy new design element or software gimmick their favorite OEM has to offer. But not everybody needs a phone with all of the highest-end features — and more importantly, not everybody can afford one.

Luckily for those people, the Moto G series has always been a great way to get flagship-like performance without the flagship price. The G5 Plus is the latest addition to the series, but does it hold true to its family’s reputation?

The Moto G5 Plus takes a lot of design cues from its premium sibling, the Moto Z. They both share a front-mounted fingerprint sensor resting beneath the display, and a huge camera bump around back. It also borrows the Moto Z’s water resistance, though unfortunately like the Moto Z, there’s no official IP rating and we’re instead given the vague phrase “water-repellant nano coating.”

Lenovo claims the Moto G5 Plus sports an all-metal design, but that’s just not true. There’s some metal to the chassis, namely the aluminum back plate, but the rest is good old plastic. Still, it feels like it could take a beating. Not that you should try to find out. Lenovo claims the Moto G5 Plus sports an all-metal design, but that’s just not true.

Despite a solid and sturdy in-hand feel though, the design isn’t without some minor gripes. The camera bump extends a fair bit past the rest of the body, exposing the lens to potential scratching when the phone is laid flat on a surface — unless you don a case, of course. A case might also help with the mushy and dissatisfying power and volume keys.

There’s also the problem of legacy ports. Most will be happy to see a 3.5mm headphone jack on the G5 Plus, but next to it is a microUSB port, rather than the newer and more versatile USB-C port we’ve come to expect from a phone released in 2017.

The display is surprisingly good on the Moto G5 Plus. It’s a 5.2” 1080p IPS LCD panel protected by Gorilla Glass 3. It’s not the best in direct sunlight, but it has decent enough color reproduction and viewing angles — none of the milky overtones that plague most low-cost smartphone displays.

Short and sweet: the software experience on the Moto G5 Plus is one of the cleanest that we’ve seen on any Android smartphone outside of the Nexus and Pixel brands. Only the bare essentials are preinstalled to the phone; in fact, the only things keeping it from being a totally stock build of Android 7.0 Nougat are a few Moto tweaks that actually add functionality instead of just loading your phone with bloatware out of the box.

The Moto app is home to gestures we’ve loved since the original Moto X, like double-twisting the phone in your hand like a Bop-It to launch the camera, or making a double-chopping motion to activate the flashlight. These shortcuts are much quicker than unlocking the phone and fumbling to find the right icon, and have become an invaluable part of the Moto experience. 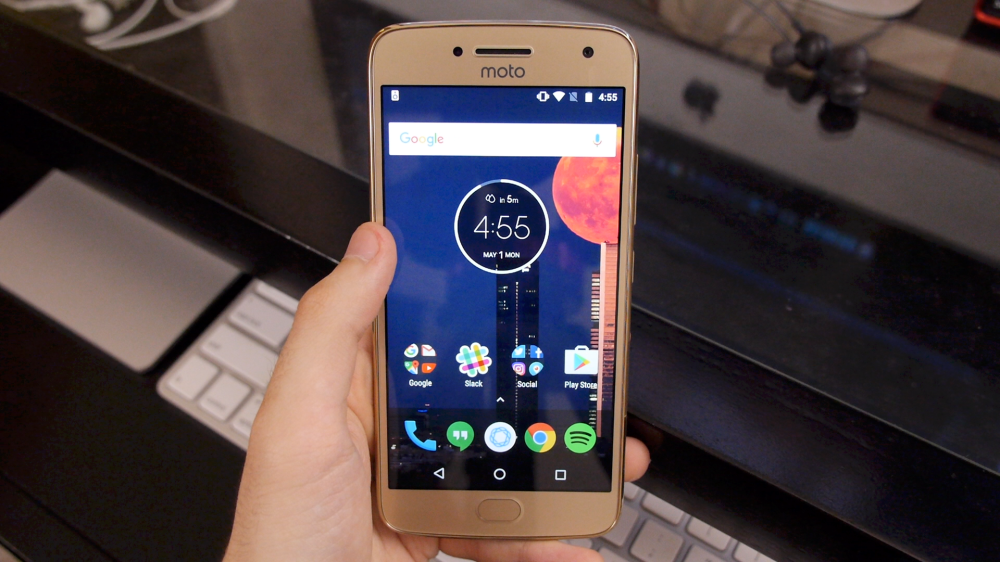 Also within the Moto app is the ability to map the fingerprint sensor as a gesture trackpad to replace the on-screen navigation keys. By default, tapping the sensor mimics the home button, a swipe left is back, and a swipe right is recent apps. It’s definitely not a feature everybody will want to turn on, but it’s a great inclusion for those wanting to really maximize their screen real estate.

Moto Display also makes a return with the G5 Plus, displaying notifications whenever the phone detects motion without having to press the power button or unlock the display. I love how much information you can get from a notification by dragging its icon upward, as opposed to the always-on display implementations found on phones like the Galaxy S8 or LG G6 that basically only serve to tell you what kind of notifications you have rather than specific details. 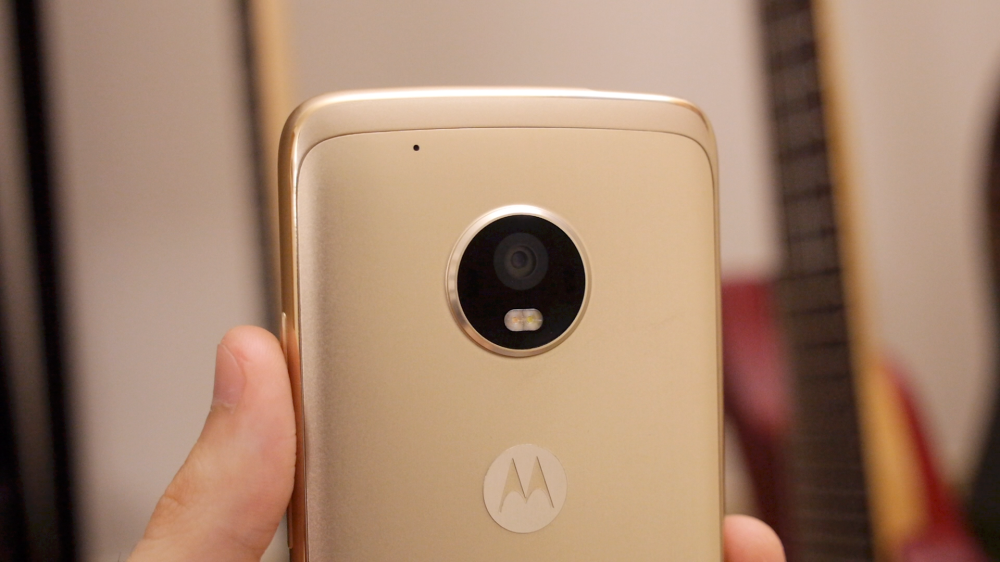 You never really know what to expect from the cameras on a low-cost smartphone. More often than not, they leave you wondering why the phone even shipped with cameras in the first place. Thankfully, the camera on the Moto G5 Plus is actually pretty good — mostly.

The front camera is 5 MP and the primary camera is a 12 MP sensor with an f/1.7 aperture that’s capable of taking surprisingly good photos in proper lighting. There’s a fair level of detail in even text-heavy photos, though the camera seems to have quite a bit of trouble with autofocus. There’s also no image stabilization on board, which would’ve been a big help in low-light situations, where the G5 Plus’s camera falls apart. Focus becomes fuzzy and colors all blend together into a grayish mess.

Endurance is easily the Moto G5 Plus’s best aspect. Over the course of my testing, the G5 Plus consistently gave me over five hours of screen-on time, sometimes pushing past six or even seven. Between Nougat’s battery enhancements and Lenovo’s own optimization, the G5 Plus offers outstanding longevity, despite a fairly average 3000 mAh battery sealed inside.

Further sweetening the deal, the G5 Plus also comes with a Turbo Charger capable of providing an additional six hours of battery life in just 15 minutes. 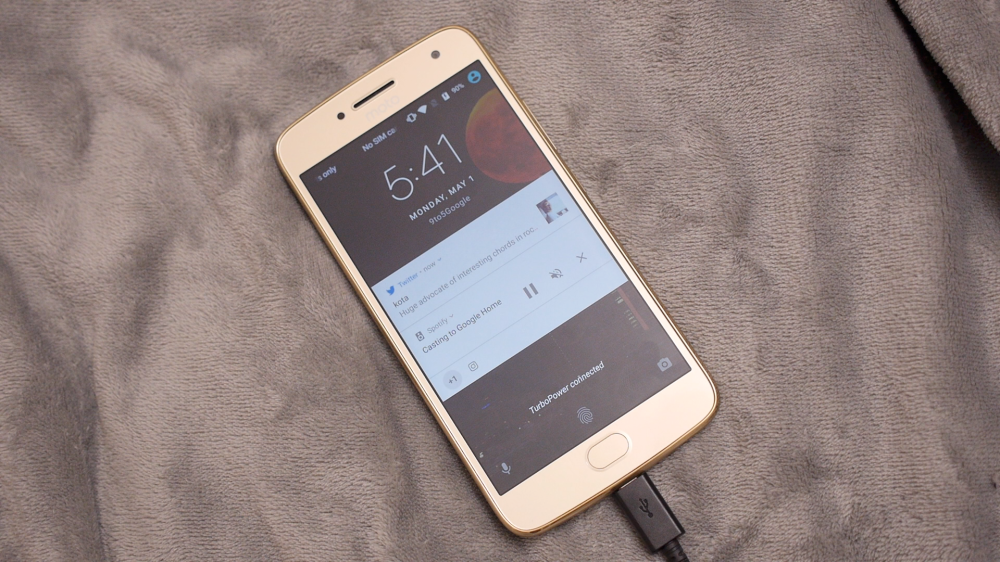 On the flip side, there’s no wireless charging to be found here, and moreover there’s no NFC for wireless payments either. Given the price of the G5 Plus that’s not really surprising, and Lenovo says that most users don’t use either of those features anyway, but it’s still something to note if you were looking to ditch your wallet or charging cables any time soon.

The Moto G5 Plus is just a terrific deal, and one that stays true to the Moto G of years past. At $229, you’ll be hard-pressed to find a similarly priced phone with the same kind of endurance, clean software, decent cameras, and speedy performance. For those looking to get a Nexus-like experience on a budget, look no further than the Moto G5 Plus.