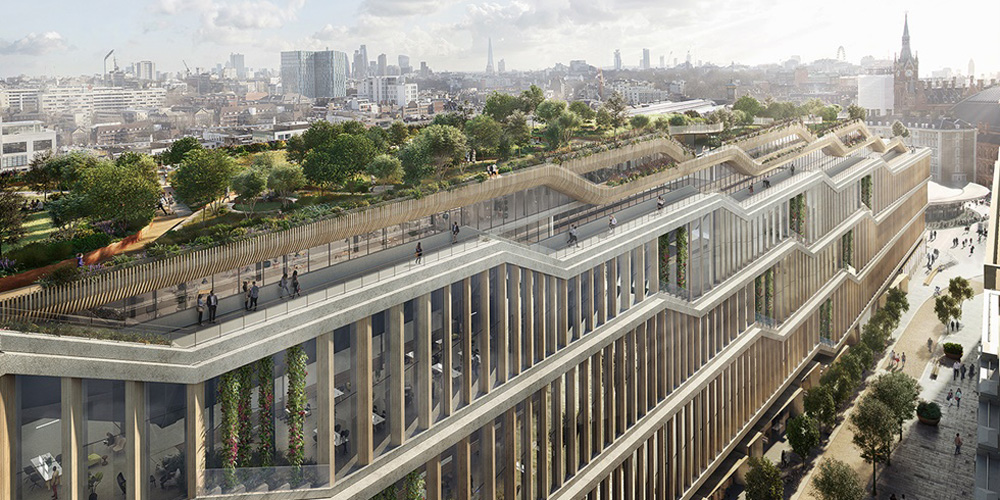 Google’s plans for a new London campus have taken a while to come to fruition, but the company has now submitted a formal planning application for the redesigned building. It will be situated directly opposite Kings Cross station, close to the Eurostar terminus.

Initial plans were filed back in 2013, but the company later decided the design lacked ambition. In 2014, Google asked for an all-new design, and later commissioned the team behind its Mountain View campus to carry out the work …

Architect’s Journal notes that the new design is a tiered one, climbing from seven to eleven stories in height, and will house 4,000 staff.

Engadget highlighted some of the features of the building.

The building that will sit on a “plinth” of shops and offices, and feature a three-lane 25 metre pool, multi-use games area (hosting basketball, five-a-side football or badminton), a gym and a huge landscaped roof garden […]

A sprawling events centre will span its lower ground, first and second floors […] the company will build a 200 metre “Trim Track” with regular exercise stations for runners and an amphitheatre in the north-west corner that offers visitors a 270-degree view of the city.

One notable feature is the way the building will maximize sunlight with floor to ceiling windows, but shade staff from the glare and heat of the sun with full-height motorized timber blinds that will rotate 180 degrees in the course of the day.

As you’d expect, the building is designed to be environmentally friendly. Features here include solar panels with a combined annual output of 19,800kWh, a rainwater harvesting system and on-site recycling center. Sustainable transport is encouraged via storage for 686 bicycles, and just four car parking spaces. If that sounds extreme, take it from me that you’d have to be a masochist to drive to work in central London. The location is also extremely well-served by public transport.

Locals have until June 21 to comment on the plans, after which the council will decide whether or not to grant permission to go ahead with the construction work.