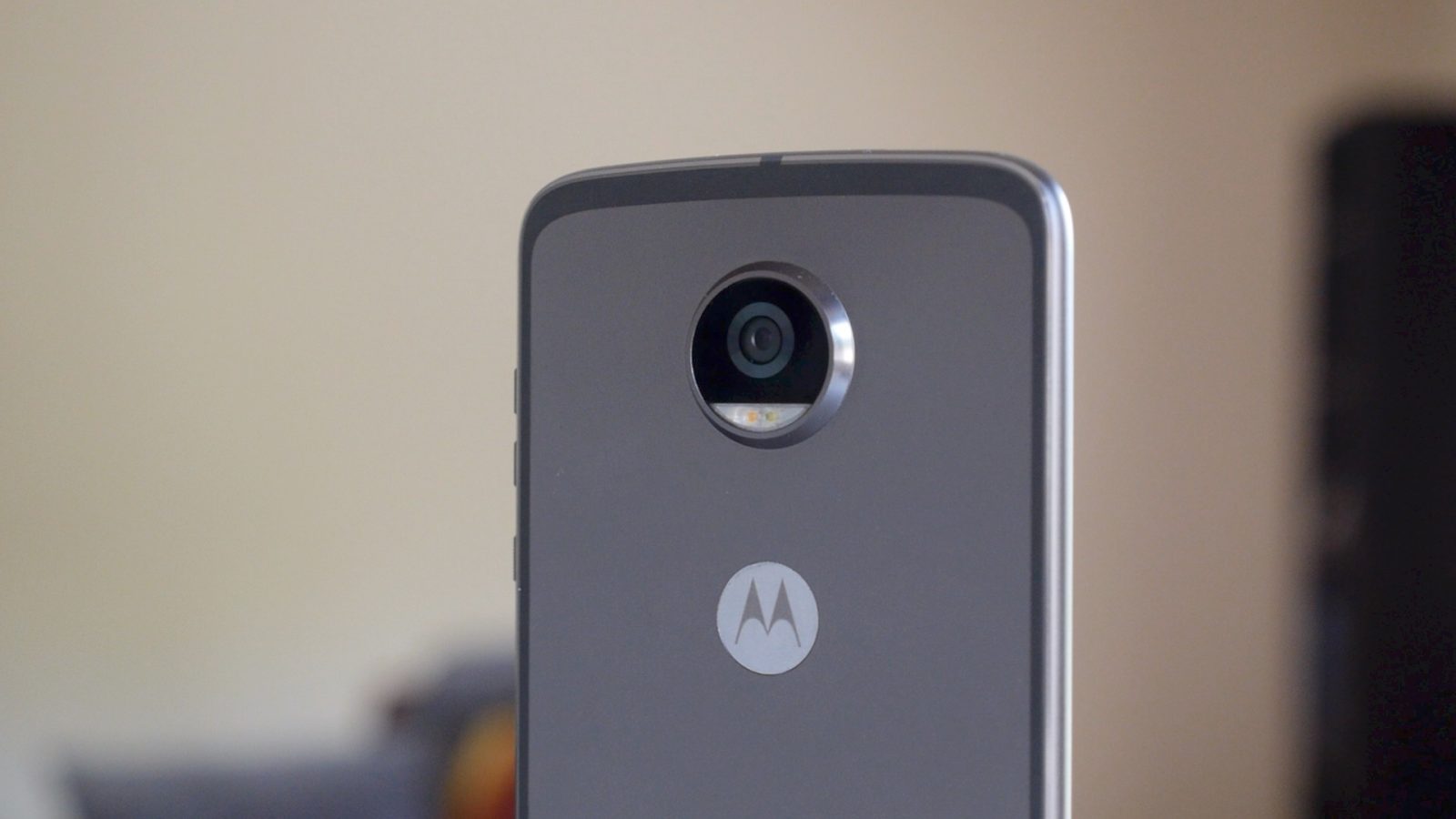 By far, the most common gripe about today’s smartphones is that they don’t last long enough. Consumers clamor for a bigger battery, even at the cost of added thickness, yet manufacturers continue to do the opposite, making phones thinner and offering the same or an even smaller capacity battery.

The new Moto Z2 Play is no exception; it sheds a millimeter from its already crazy-thin predecessor, and shrinks the battery by 15%. For years, the Play tag has symbolized great endurance, so on the surface this sounds like a mistake, but there’s still a lot to like about the Moto Z2 Play.

From a design perspective, the Z2 Play is almost identical to every other phone in the Moto Z lineup. The aluminum body feels very solid despite being just 6mm thick, and the chamfered edges make for a premium aesthetic. The power and volume buttons are nice and clicky (though they’re a bit smaller and higher up than I’d like), and there’s a headphone jack next to the USB-C port.

The back of the phone is distinctly Moto, with a large camera hump and an array of magnetic pins near the bottom for attaching Mods. The glossy coating of last year has been replaced with a matte finish, making it much less prone to fingerprints. The only thing missing from the hardware is water and dust resistance, but it’s at least protected from light splashes and rain. 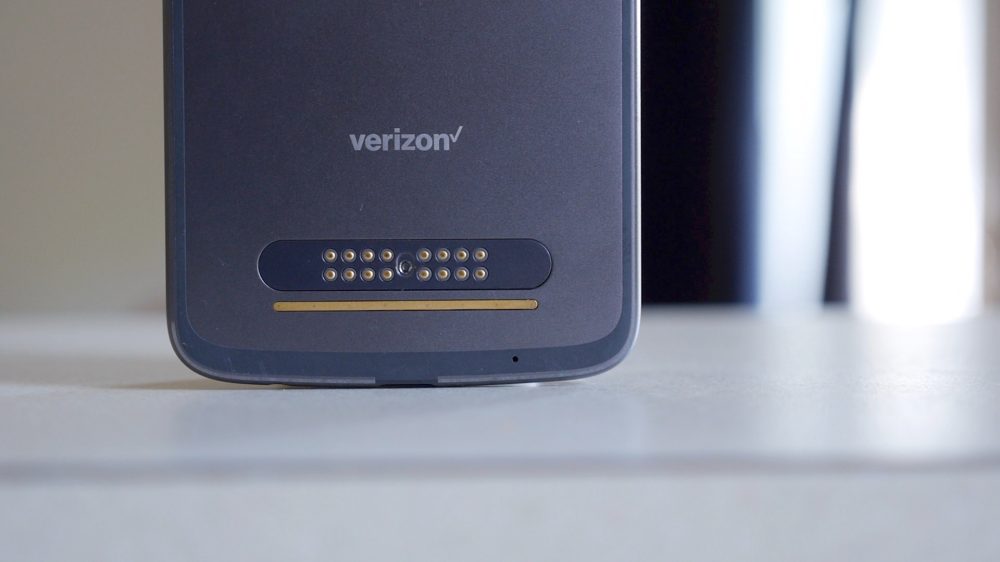 Up front, the Moto Z2 Play features a 5.5” Super AMOLED display, coated with Corning Gorilla Glass 3. At 1080p it’s relatively sharp, and less of a battery drain than QHD. It has good viewing angles and gets bright enough for outdoor use (though just barely). Directly underneath the display is the Z2 Play’s fingerprint sensor, which is quick to read and can even be used as a gesture trackpad for navigating around. I tried it for a week or so, but ended up coming back to on-screen controls, though your preference and mileage may vary.

If you’re new to the Moto Z series, you might be unfamiliar with the Moto Mods I’ve mentioned a few times already. In short, they’re attachments sold separately from the phone that connect through the Z2 Play (or any other Moto Z)’s magnetic pins and add functionality like a better camera or even a gamepad. The three Mods I tested with the Z2 Play were the JBL SoundBoost 2, TurboPower Pack, and Style Shell with Wireless Charging.

The SoundBoost 2 is a speaker attachment that adds significantly better audio to the Z2 Play, and includes a kickstand to prop itself up for convenient media playback. I listen to a lot of rock and metal, so I don’t care for the default bass-heavy sound profile, but luckily you can adjust the EQ settings with JBL’s app — which you’ll be prompted (but not required) to download after attaching the SoundBoost for the first time.

The new Style Shell is nice, too. You can get either a nylon material or the floral print that I’ve been using, and while last year’s Shells only added aesthetics (and a bit of extra thickness), the new line brings 10W wireless charging to Moto Z devices. I like the slight curvature the Shell adds, and while it’s easy to say that wireless charging should just be built into the phone, the aluminum body wouldn’t allow for it so this feels like a good solution. 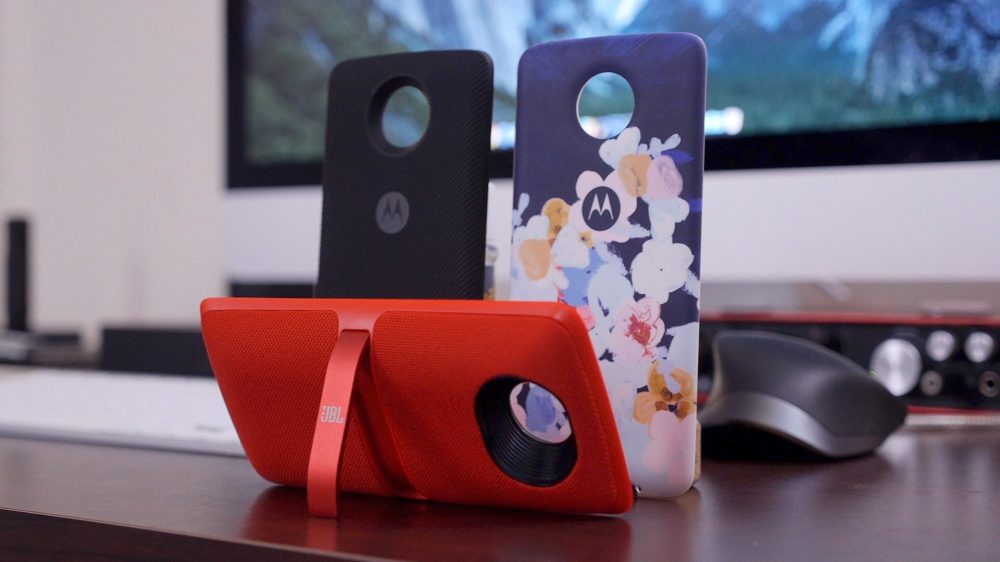 The TurboPower Pack is Moto’s first in-house battery Mod, adding 3490 mAh to the phone — even larger than the built-in battery. At 6.58 mm it doubles the phone’s thickness, but the combined package is still plenty manageable. The TurboPower Pack charges the Z2 Play at a speedy rate of 15W, and can be recharged even faster when plugged into a USB-C wall charger.

As much as I enjoy the Moto Mods, they’re definitely not the perfect method to modularity. I took the Z2 Play with me on vacation last week, along with the SoundBoost 2 and TurboPower Pack (I didn’t get the Style Shell until I got home), and while the extra battery was a life saver for traveling and the big speaker came in handy while we were cleaning the Airbnb, it was impractical trying to carry around so many devices at once.

They’re pretty expensive too; the Style Shell is $40 and the other two run $80 a piece. For that kind of money you could pick up a much higher capacity battery or a better speaker, though part of what you’re paying for is the convenience of attaching them to your phone — as well as the promise that they’ll work on all Moto Z devices, keeping your purchases future-proof (and keeping you locked into the Moto ecosystem).

The best part of Moto phones is how clean they keep the software. The Z2 Play runs a near-stock build of Android 7.1.1, with the Moto app adding some signature conveniences that many long-time users have come to know and love. You can train the app to recognize your voice and use a custom trigger phrase for voice commands if you’re tired of barking “okay, Google” at your phone. There’s also Moto’s double twist and chop motions to activate the camera and flashlight respectively, and Moto Display shows notifications without having to turn on the entire screen.

AppFlash is a new feature on the Moto Z2 Play that replaces Google Now to the left of the home screen. It offers a lot of the same features, aggregating news, weather, and frequently used apps, but if it’s not your thing you can always switch back to Google’s feed in the home screen settings. 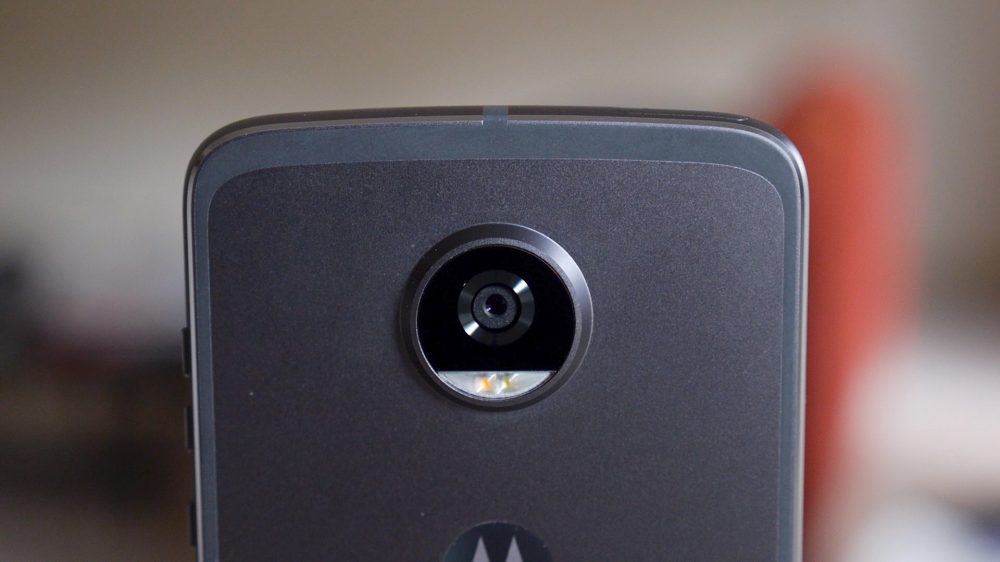 The 12 MP rear camera isn’t quite in flagship territory, but it’s pretty good nonetheless. With both phase detection and laser autofocus, it has no trouble quickly focusing in on a subject, and it handles multiple exposures well.

The camera app is pretty simple and easily accessible thanks to Moto’s twist-to-launch gesture, but shooting video isn’t quite as quick since it’s tucked into its own separate mode. The f/1.7 aperture does a pretty decent job in low light, with a dual-tone LED flash to back you up — there’s even a flash on the front-facing camera.

Longevity is the name of the game with Moto’s Play subcategory, so when the Z2 Play took a 15% hit down to 3000 mAh, the biggest worry was that the battery life wouldn’t stack up to its predecessor. I never got the chance to use the original Moto Z Play for comparison, but I was still hugely impressed by how long it lasted.

My first day of testing involved downloading and setting up dozens of apps, getting a feel for the nuances of the software, and streaming hours of Dexter on Netflix. In total, I got just over eight hours of screen-on time, including leaving the phone off the charger overnight and using it a bit more in the morning.

To see just how long I could avoid a cable, I threw on the TurboPower Pack at 9:30 AM with 3% battery and managed to charge back up to 78% and continue on with day two. By midnight, I reached an insane 14 hours of screen-on time and still had 14% remaining. After I finally gave up and threw it on the charger, it topped up in just about two hours. Rest assured, the Z2 Play’s smaller battery doesn’t stop it from being a perfect travel companion. 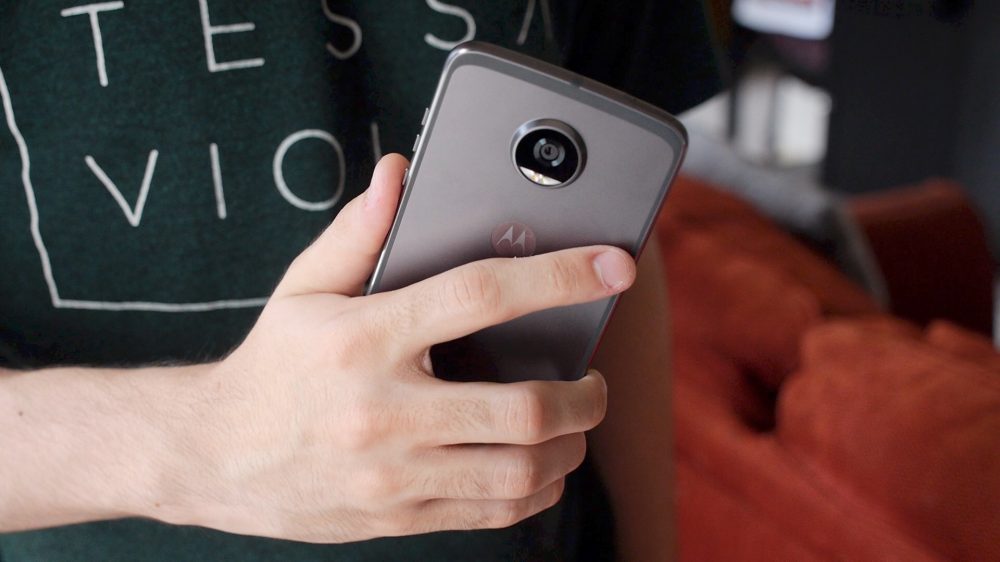 $400 for a modular phone with excellent battery life, a good camera, and fast performance is a great deal, but like most good deals … there’s a catch. That price only applies to Verizon customers; if you’re buying unlocked, you’re looking at $500, which puts it in the same price range as phones like the OnePlus 5 or a used LG G6, both of which offer faster performance and better cameras.

Still, we’re always yearning for better battery life, and the Moto Z2 Play certainly offers that over the OnePlus 5, G6, and most other phones, without making any real sacrifices. With enough Mods, the cost can add up fast, but they’ll work on future devices, and even without Mods, the Moto Z2 Play is a great smartphone for the price — though power users may want to wait a week or two and see what else Moto has in store.