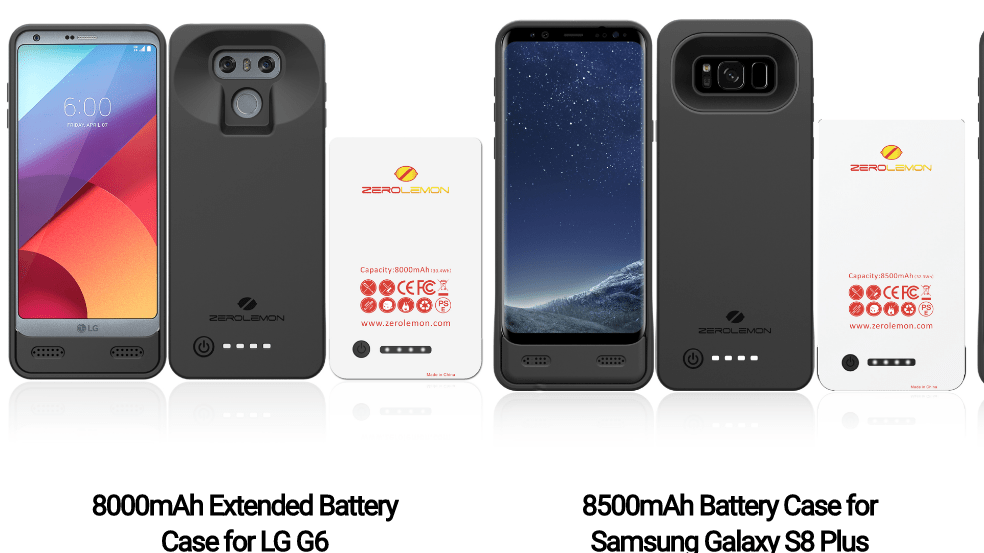 Phone batteries have gotten considerably better over the years, but despite the improvements we’ve made in battery technology, it can sometimes still be a challenge to make it to the end of a day with juice remaining after a lot of intensive use.

ZeroLemon, one of the top battery case manufacturers, has just announced all-new battery cases for the Samsung Galaxy S8, S8+, and the LG G6.

Made out of a soft TPU shell, the ZeroLemon case for the G6 provides ample protection against accidental drops and falls while also extending its battery life up to 170% thanks to the large 8000 mAh unit. As you’d expect, the rear of the case has cutouts for the G6’s dual-camera system and fingerprint scanner/home button.

ZeroLemon crafted two different cases for the Galaxy S8+, an 8500 mAh model and a smaller 6300 mAh one. The former promises a similar 170% battery increase like you’ll find with the LG G6, whereas the latter increases battery life by 125%.

If you prefer the smaller S8 over the S8+, ZeroLemon has you covered here as well. The physical design of the case looks identical to the one for the S8+, and with the 8500 mAh battery, ZeroLemon says that you can expect increased battery life up to 195%. That’s nearly double the standard life of the S8, meaning you should have more than enough power for a couple of days of hardcore use.

All three cases feature speaker grills on the front to pump out audio from the phones’ external speakers, and there are also precise cutouts for all ports, buttons, etc. Plus, as a nice promo to properly intro all of the new cases, ZeroLemon is currently running a sale that cuts prices up to 50% off.