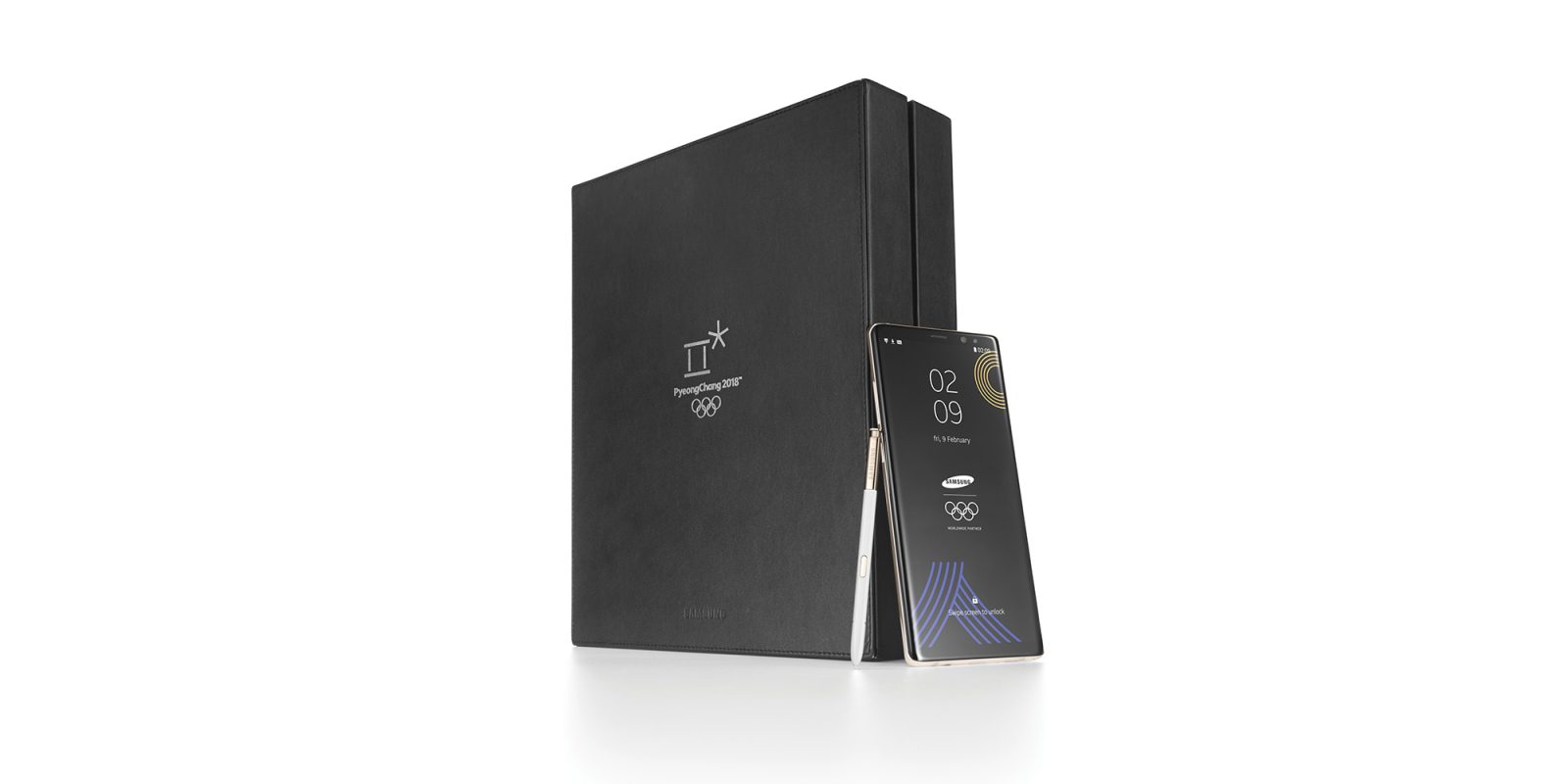 With the 2018 Winter Olympics just around the corner, Samsung has announced a limited-edition Galaxy Note 8 styled after the event. You might remember that Samsung did something very similar at the Rio Olympics back in 2016…

The celebrate the fact that this year’s Olympic games will be held in the winter, the backing of the Note 8 will be “shiny white.” Additionally, the iconic golden Olympic rings will be displayed near the bottom of the handset.

The included S Pen will be styled just like the back of the handset, keeping with the white and gold design. Around front, though, you will find a black border accompanied by Olympic-themed wallpapers.

Unfortunately, the only way you’ll be able to get your hands on one of these limited-edition Galaxy Note 8 handsets is to be one of the 4,000+ Olympic athletes. But by giving everyone participating a handset, Samsung hopes to let every athlete “[share] pictures, video and messages with family, friends and followers” — and of course to advertise the flagship handset.

With less than a month to-go until the Olympic Winter Games PyeongChang 2018, Samsung Electronics, Worldwide Olympic Partner in the Wireless Communications Equipment and Computing Equipment category, today unveiled the PyeongChang 2018 Olympic Games Limited Edition. To further extend its Olympic legacy of supporting athletes and the Olympic family, Samsung will provide the exclusive devices, which are a special edition of the Galaxy Note8, as encouragement to do bigger things at the Olympic Winter Games, while also helping maintain real-time connections and capturing and sharing memories with those near and far.

In collaboration with the International Olympic Committee (IOC) and the PyeongChang Organizing Committee for the 2018 Olympic & Paralympic Winter Games (POCOG), Samsung will deliver over 4,000 devices to all Olympians as well as the PyeongChang 2018 Olympic family, including IOC and POCOG staff allowing them to lean on Samsung mobile technology to enhance their experiences and connect more conveniently. The PyeongChang 2018 Olympic Games Limited Edition will include the bold new features of the Galaxy Note8, such as the innovative bezel-less 6.3-inch Infinity Display that fits comfortably in one hand, enhanced S Pen for efficient productivity, and Samsung’s best-in-class Dual Camera. Exclusively for the Games, the PyeongChang 2018 Olympic Games Limited Edition will showcase a shiny white back glass to celebrate the winter theme, and gold Olympic rings – inspired by the Olympic Torch – an expression of the Olympic Movement with the union of five continents, and unity worldwide.

“Throughout our 20-year legacy as an Olympic partner, Samsung has showcased our support of the Olympic Movement by helping spread the Olympic Spirit and enhance connections through our latest technological innovations and immersive experiences,” said Younghee Lee, CMO and Executive Vice President, Samsung Electronics. “We’re proud to provide the PyeongChang 2018 Olympic Games Limited Edition to all athletes in an effort to help them to stay connected, capture and share one of the most memorable moments of their lives.”

“Samsung’s commitment to the Olympic Movement has increasingly enabled meaningful connections through innovative mobile technologies over the past 20 years,” said IOC President Thomas Bach. “Samsung’s creation of an Olympic Games Limited Edition device reinforces Samsung and IOC’s shared desire to spread the Olympic spirit. It’s because of dedicated partners like Samsung that we’re in the position to provide unforgettable experiences at the Olympic Games time after time.”

About Samsung’s Involvement in the Olympic Games

Samsung began its Olympic Games involvement as a local sponsor of Olympic Games Seoul 1988. Beginning with Olympic Winter Games Nagano 1998, the company extended its commitment to the Olympic Movement as the Worldwide Olympic Partner in the Wireless Communications Equipment category, providing its proprietary wireless communications platform and mobile devices. These innovative mobile technologies provide the Olympic Community, athletes and fans around the world with interactive communications and information services, and Samsung Pay. Samsung hosts various Olympic campaigns to share the excitement of the Olympic Games with people around the world and enable everyone to participate in the Games through its innovative mobile technology. Samsung’s commitment as a Worldwide Olympic Partner continues through PyeongChang 2018, and Tokyo 2020 in the Wireless Communications Equipment and Computing Equipment category.