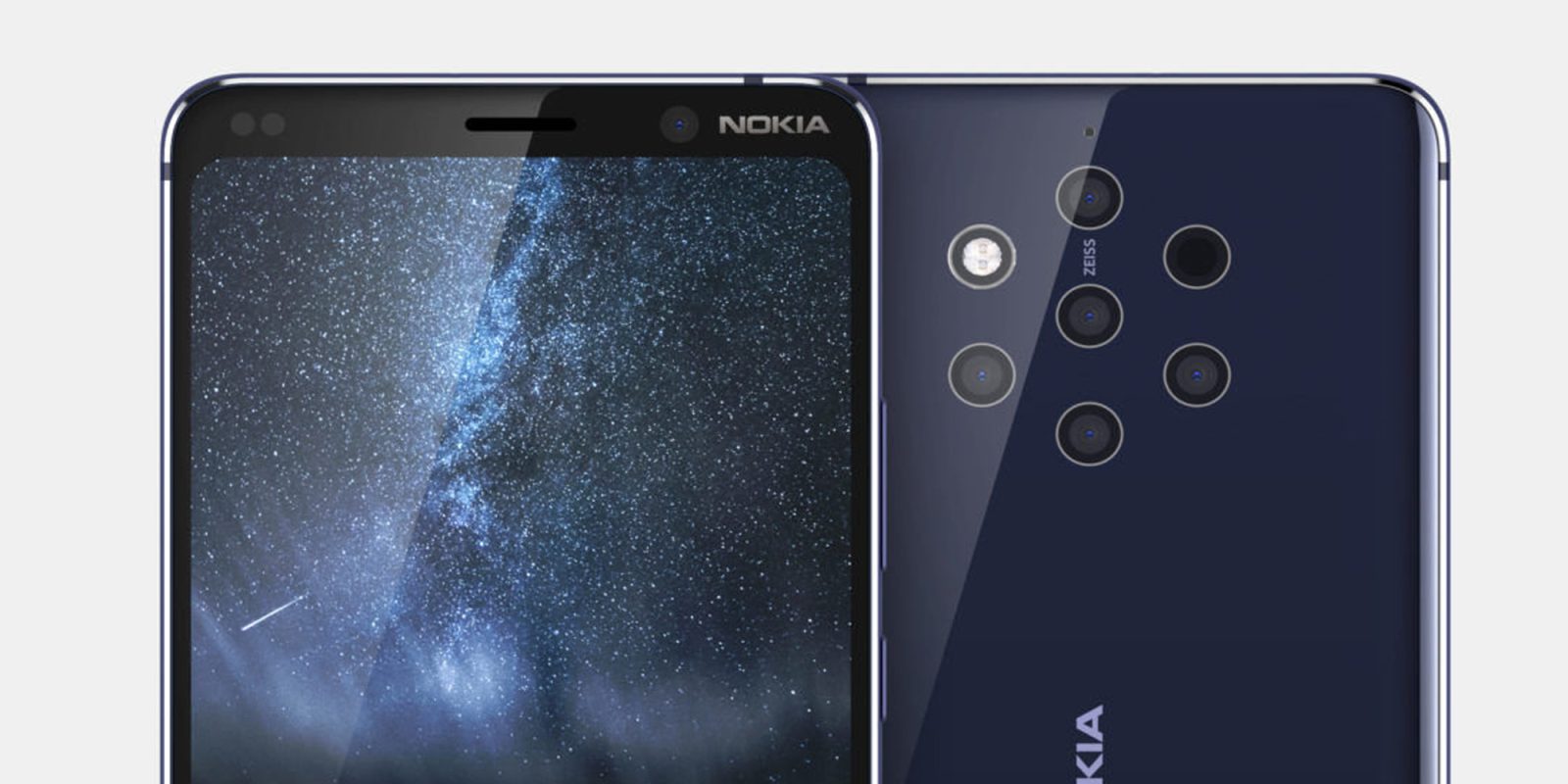 After such a positive launch of the Nokia 7.1, HMD Global seems to be on a roll with the Nokia brand at the moment. They are no doubt hoping this ‘roll’ continues with the launch of their reported upcoming flagship — the Nokia 9. We’ve previously had a glimpse of the device during its prototype stages. But now, thanks to leaks from @OnLeaks and 91Mobiles, we’re getting a look at what the trypophobia-inducing device could be bringing to the table.

As for the design, the Nokia 9 does have a lot of less than unique aspects. The 18:9 display, glass sandwich design and metal frame are all par for the course with this upcoming flagship. There is no notch though, which we’re sure will delight some readers. Instead, the basic single-lens front-facing selfie camera is in a less-than-standard right position alongside an embossed Nokia logo.

Now the back is where the Nokia 9 gets interesting, where it will have seven rings — yes, seven. Five of them will play host to camera lenses and one will merely hide the dual-tone LED flash. The last one is likely to act as a dual-sensor for proximity detection, but at this stage, we’re not entirely sure. 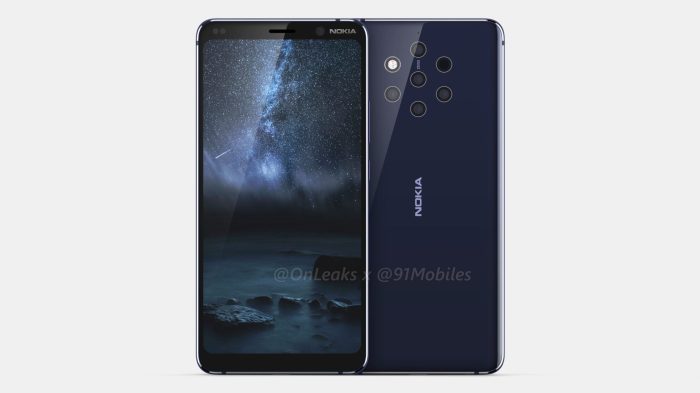 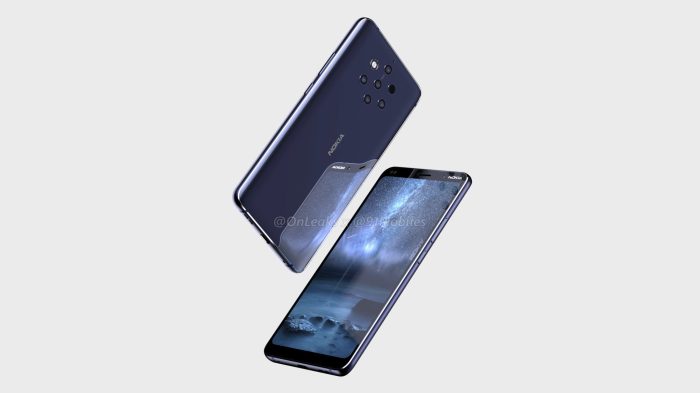 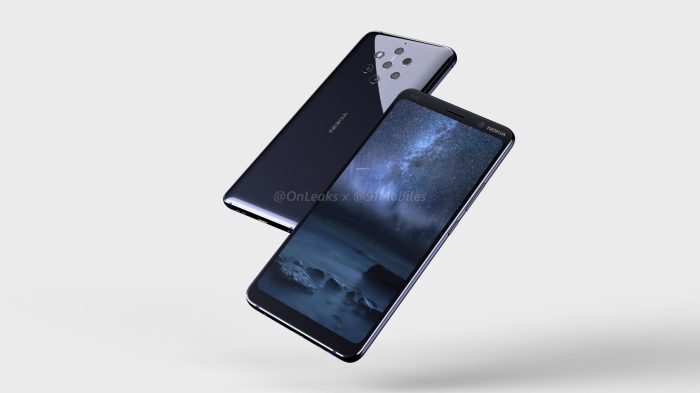 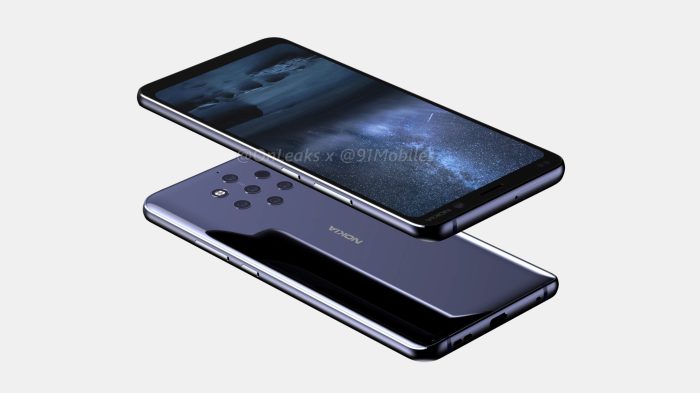 It will be interesting to see if HMD Global and Nokia are going to relaunch the PureView branding with this device. We’re definitely excited by this potential camera development and would love to get properly hands-on with it. There’s also a Zeiss logo in amongst all of those lenses, further cementing the partnership between the two brands on the camera gear stakes.

As for specifications, let’s talk about that notchless display. It’s a 5.9-inch QHD resolution at 18:9 with nice narrow bezels all around. There is a slightly large chin at the bottom, but without the standard Nokia logo embossed, instead, that’s toward the top right. Can’t say I’m a huge fan of any major logo on a device though.

The dimensions of the Nokia 9 are expected to be 155 x 75 x 7.9mm. There is no room for a physical fingerprint reader on the front or back, which points towards the Nokia 9 potentially having an in-display fingerprint reader. Whether or not the phone will support face unlock is not yet known.

Headphone port fans will be disappointed as there is no pluggable hole for the 3.5mm jack to be found anywhere on the Nokia 9. We’re hoping that Nokia includes a dongle or USB Type-C headphones in the retail packaging.

Round the sides, you’ll notice a volume rocker and sleep/wake button on the right. The left side is input hardware free. Up top you’ll find the SIM card tray and down at the bottom, expectedly, you’ll find a USB Type-C charge port.

Internally, we are expecting the Nokia 9 to be powered by a Snapdragon 845 chipset and not the upcoming Snapdragon 855 chipset. Beyond that we are also hearing that the device will come with 8GB of RAM, 128GB of storage and a massive 4,150mAh battery.

The Nokia 9 will also likely ship with Android 9.0 Pie, with a nice light skin on top that will be as close to stock as possible. Pound for pound with the reported specs, this device could compete directly with Google’s own Pixel devices.

Everything points towards this being a truly top-tier Android smartphone. Pricing and availability are, of course, not yet known, but we expect that with those specifications it could be the most expensive Nokia flagship device yet.