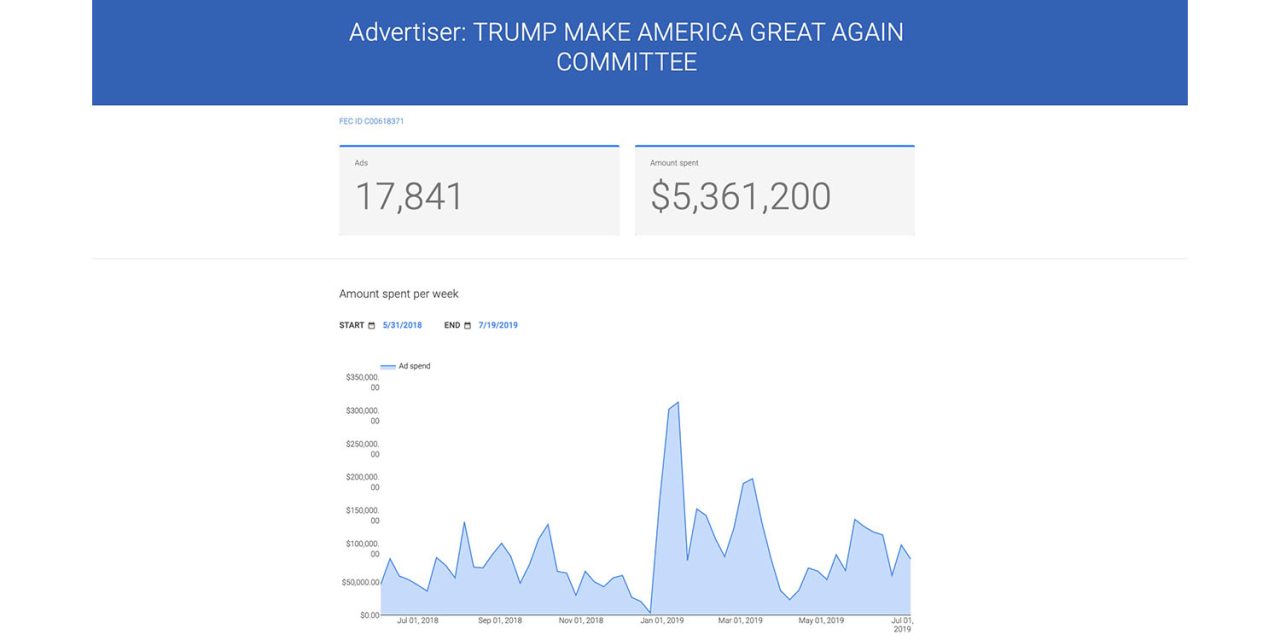 A Google Transparency Report designed to reveal who is behind election ads for presidential and congressional candidates is said to be ‘fraught with errors and delays.’ The report was first created for the 2018 midterms.

Even official presidential ad campaigns created by the two main political parties are not always tracked, with some suggesting that if Google can’t even get this right, then there is little hope of it tracking ads being run by foreign states like Russia …

Google set up a searchable database of political ads last summer, following calls for greater transparency in the wake of Russia’s interference in the 2016 presidential election.

Nearly a year later, the search giant’s archive of political ads is fraught with errors and delays, according to campaigns’ digital staffers and political consultants. The database, the Google Transparency Report, doesn’t always record political ads bought with Google’s ad tools and in some instances hasn’t updated for weeks at a time, they say.

Several campaigns, including those of Democratic presidential hopefuls Bernie Sanders and Elizabeth Warren, have run ads in recent weeks that didn’t appear in the Google archive, people familiar with the campaigns’ ad-buying said. Such mistakes have occurred for presidential and congressional candidates in both parties.

The nonpartisan Campaign Legal Center said that this meant covert ad campaigns were likely not being tracked.

Google could be missing ads run by parties looking to influence the coming election by boosting or disparaging certain candidates, as Russian entities were found to have done.

“If even the political advertisers that expect to be included in the archive are not seeing their ads made publicly available, how much is escaping disclosure by actors who want to stay secret?” said Brendan Fischer, director of federal reform at the Campaign Legal Center.

Anyone purchasing political ads is supposed to declare their affiliation.

Ad buyers are expected to mark their ads as political by entering their organization’s Federal Election Commission ID or tax ID when they make the purchase.

This is enforced when buying ads directly on Google’s own ad platforms, but not when third-party purchasing tools are used – and there’s another crucial omission.

Google’s archive tracks ads by candidate but not by political issue, such as illegal immigration or gun control—a point of frustration for advocates of stricter disclosure laws, since some ads bought by Russia-affiliated entities in 2016 were issue-focused.

Google says that it does have ways to detect election ads placed through third-parties, and that it is looking to expand coverage to issues ads, but didn’t provide details.

The report currently shows that the largest buyer of election ads is the ‘Trump Make America Great Again Committee’ with a spend to date of more than $5.3M. You can scroll down on the page to see the actual ads being run, and click on them to see the spend for each.