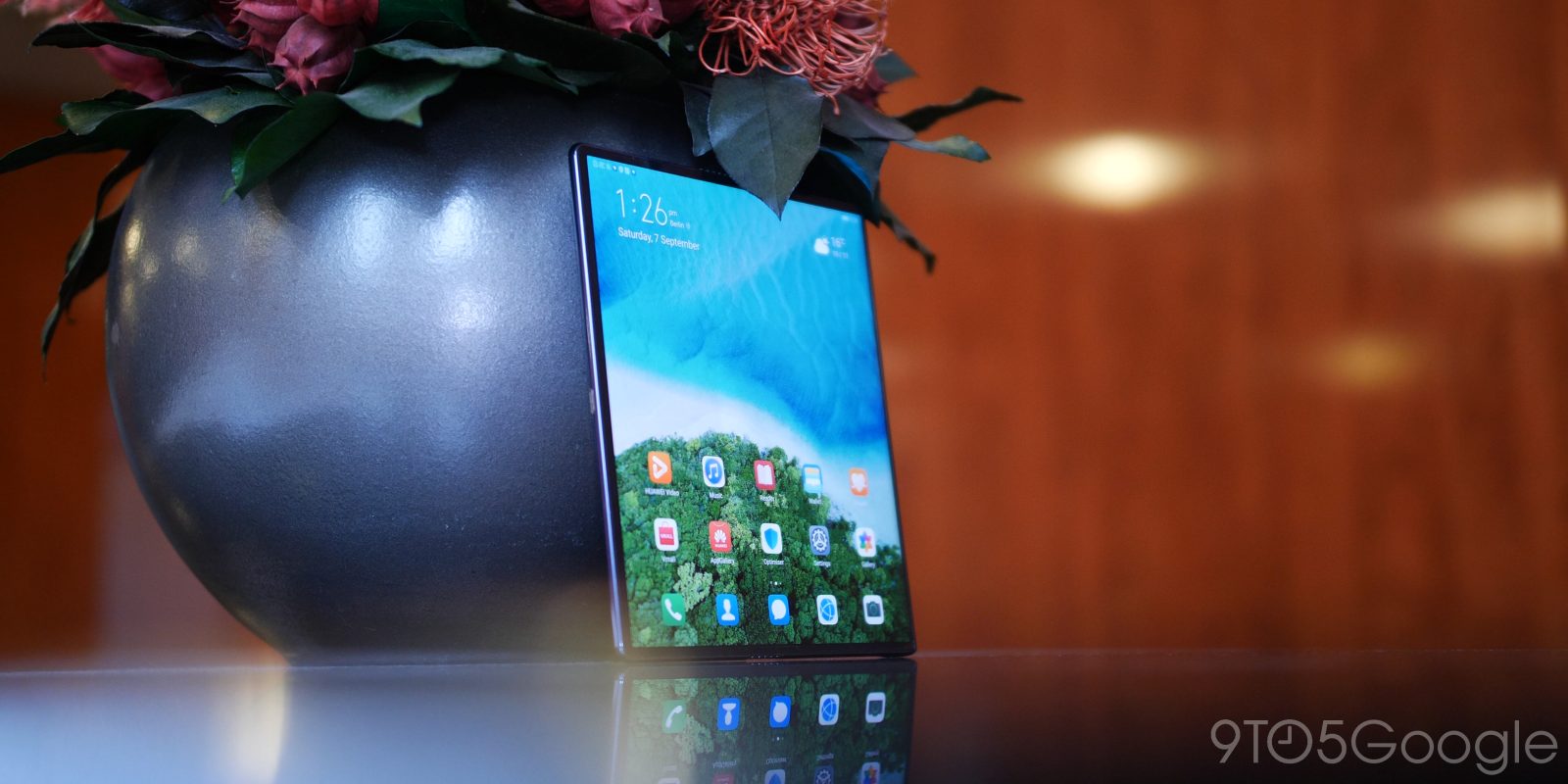 After some extended hands-on time with the Huawei Mate X, I have to admit that this is the most elegant foldable device that you might be able to buy at some point in the future — so long as you live outside of North America.

For months we’ve seen Samsung and Huawei tackle manufacturing and quality control issues to ensure that the two most notable first-generation foldable devices can make it to market. Now both companies are in a race to launch for very different reasons but with the end goal of defining the foldable smartphone market.

Having spent time with both phones, I think that I can now answer some common questions and notable concerns with the outwardly folding device. While the potential $2000+ pricing might be a little bit hard to swallow, there is no doubt the form factor is incredibly enticing.

So with all of that said and out of the way; this is our hands-on impressions of the — yet to be released — Huawei Mate X foldable smartphone. 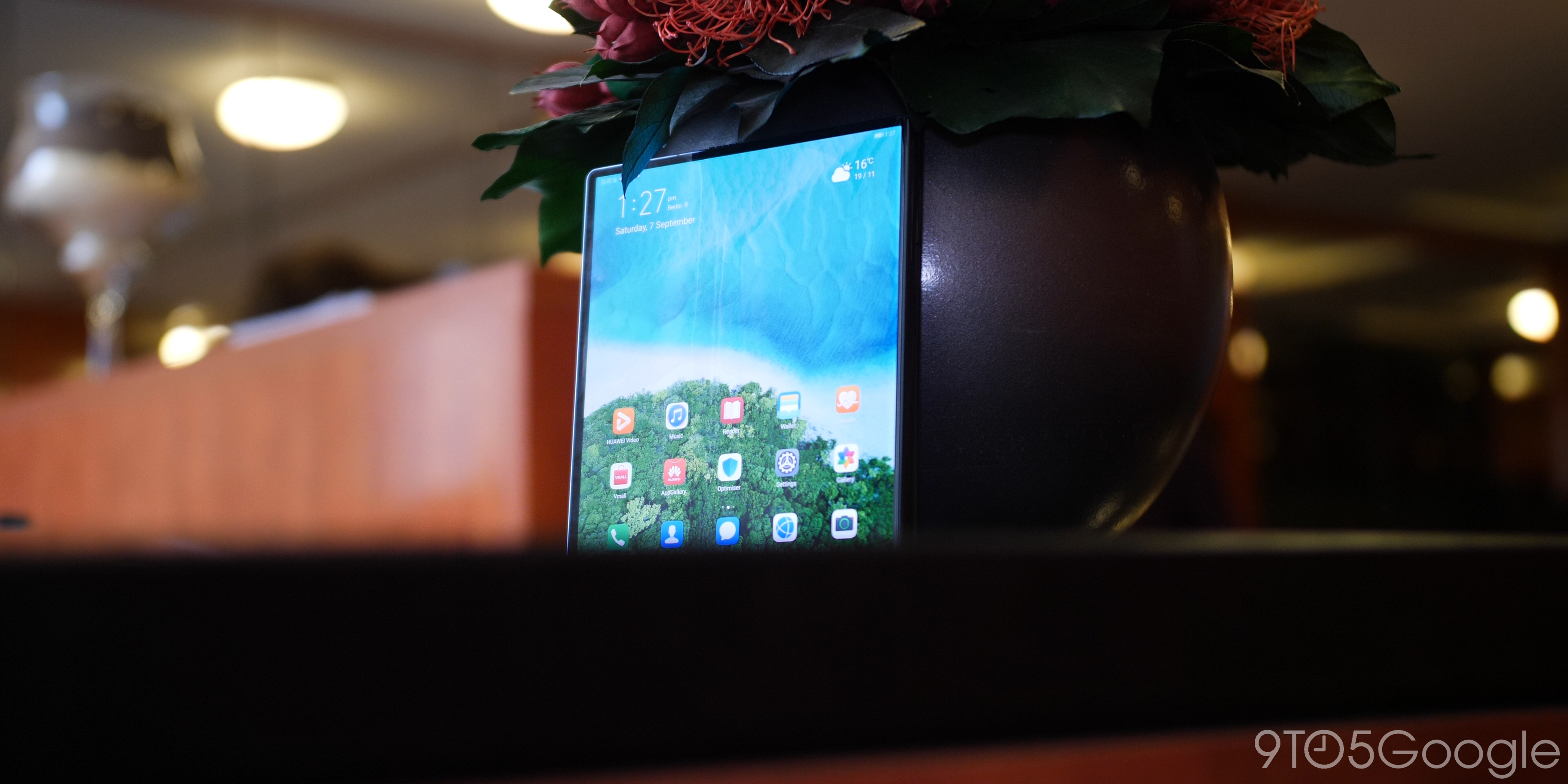 I said at the top of this piece that the Mate X is the most elegant foldable device, and I say that because this feels like you get the experience of having a smartphone that opens up with massive screen real estate while still retaining the footprint of a full-screen smartphone and the design trumps that of the Galaxy Fold.

The display has what I would describe as a thick tempered glass screen protector feel. It also comes with a pre-applied screen protector that takes the brunt of any pocket lint, gunk, and grime in your pants. That alone isn’t enough to protect your phone from damage simply due to the design, which is why Huawei will include a sort of purse with purchases of the Mate X.

As for the screen ‘crease,’ it is only really noticeable when you look at the display from odd angles. It is actually more difficult to feel under the finger than I had anticipated too. It’s smooth and pretty consistent when you consider that it bends in the middle.

I understand that some of you out there reading will be wondering why the Mate X is a more practical option. Let me put it this way: the Galaxy Fold is designed to be unfolded, the Mate X is designed to include a fold. Because of that, it feels more like a phone that has extended features rather than a display that happens to fold up. The clasp button at the back enforces this, as it keeps the back snapped shut securely. It also happens to be a dream to press and clasp shut — like clicking a ballpoint pen button.

Overall, the handset feels way more elegant than any other foldable smartphone at this early stage of the tech — at least from a design perspective. That said, it does feel much more catered towards right-handed people with the bulk of the buttons on the right side, along with the grip and camera array. 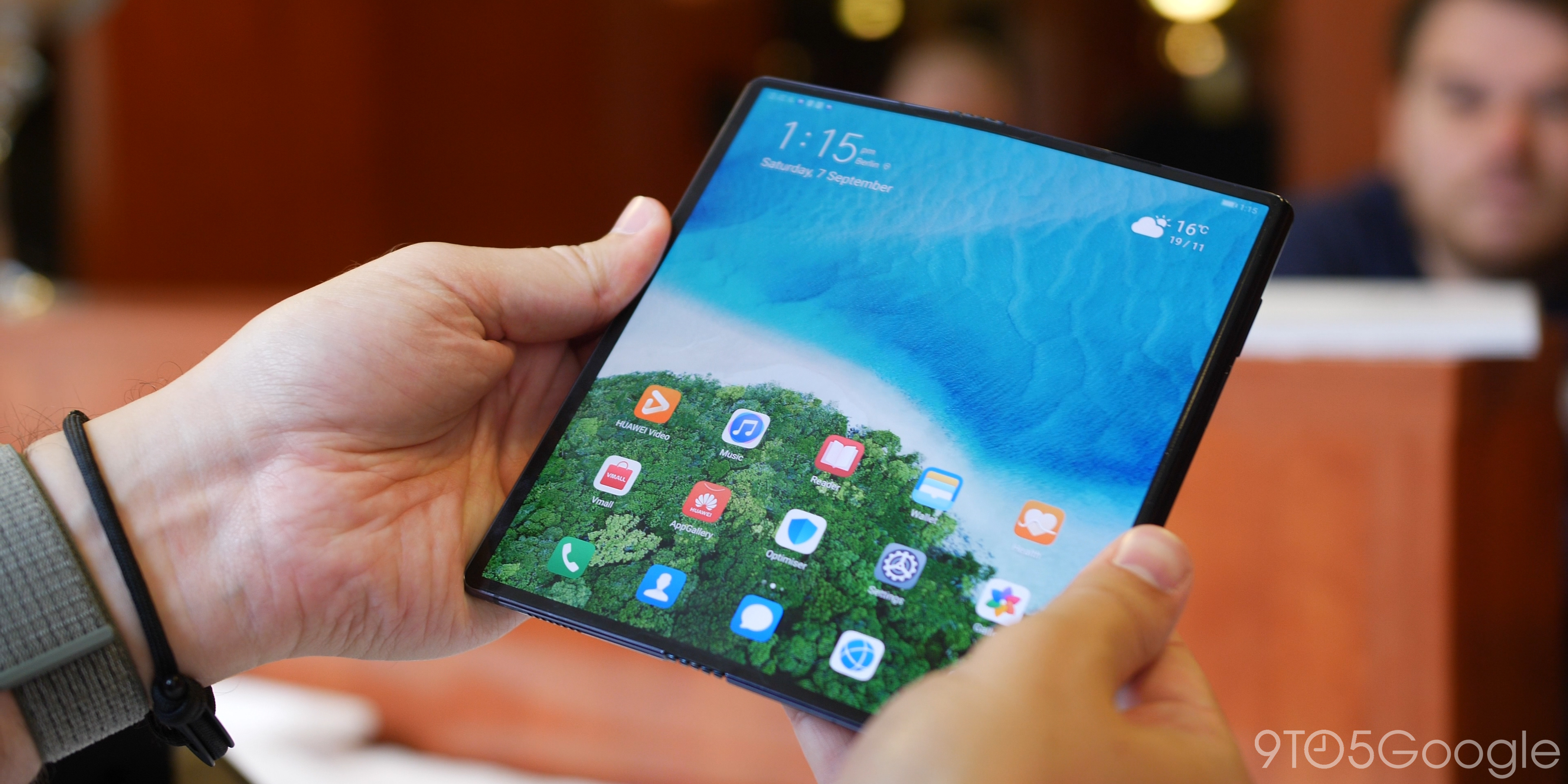 We still are unsure if the device will ever get support for Google Play Services. Richard Yu himself confirmed that the Mate X is unlikely to ship with any Google apps. That means despite the baked-in support for folding phones in the recently released Android 10, Huawei needs to ensure that everything is fully optimized for the unfolded display.

I noticed that the YouTube web app had issues recognizing the orientation of the display when unfolded and viewing full screen. It would play the video in landscape across the fold, which means you hold the device the wrong way around when viewing videos. As this was running the Chinese version of Android Pie with no Google Play Service. Because of this, we were unable to check whether this would happen on the YouTube application.

Of course, with the Kirin 980 chipset inside the Mate X was snappy during our hands-on period. There were some little hiccups and hold-ups due to the spotty tethered Wi-Fi data connection but no major slowdowns that I could were a result of the powerhouse internals. It will be interesting to see if the refreshed Kirin 990 version will have even better day-to-day performance though. 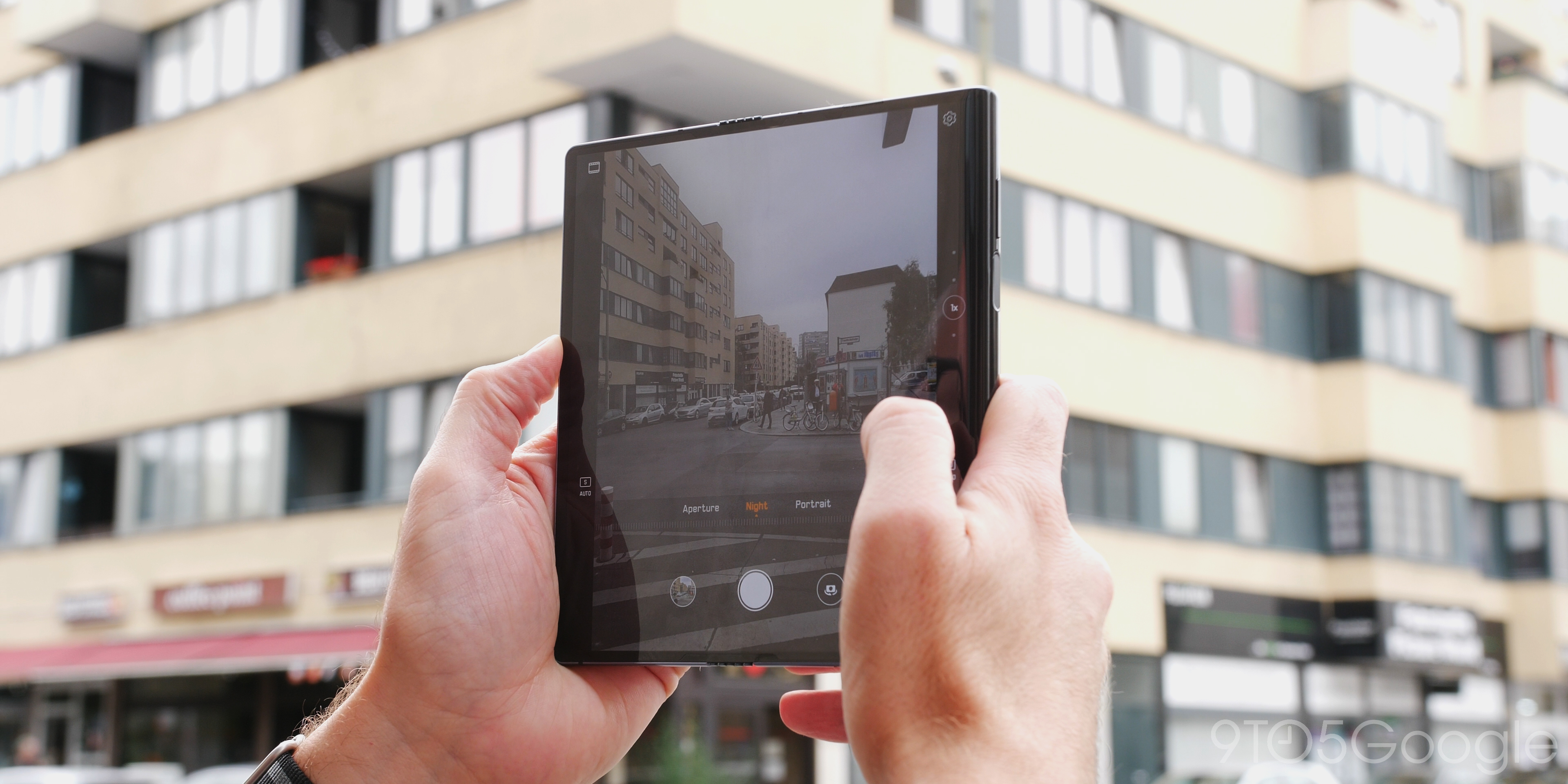 The camera looks to be every bit as good as the current top-tier offerings from the Chinese smartphone brand. You get a triple camera system that consists of a primary sensor, ultra-wide, and telephoto but with no actual selfie camera. Instead, Huawei has a neat method of utilizing the outward fold and ‘side grip’ to get you to turn the phone around to take a selfie.

An on-screen prompt tells you to flip the phone and a smaller camera UI opens up on the smaller display portion for you to frame your photo. In practice, it’s a really neat way of alleviating the need for a display cutout.

This also means that you get the exact same quality in every type of photo or video. I wouldn’t be surprised to see the Mate X towards the top of any DxOMark leaderboards for that reason. Granted that synthetic tests and scores don’t necessarily translate into real-world results.

I, like many of you, was (and still continue to be) concerned that the outwardly folding display could be a serious weak point with the Mate X. I still can’t answer just how it will hold up with days and weeks of sliding in and out of your pocket, folding and clasping or just day-to-day scrolling, swiping and tapping. I can, however, say that the experience and hardware have vastly exceeded my expectations and I am seriously excited for the future of foldable smartphones.

The ability to have a phone that can transform into a tablet in just a moment is superb. I can’t wait to see what weird and wonderful concoctions we may see in the coming years. We might finally get to see a laptop competitor that can fit in your pocket within the next five years and after some extended hands-on time, for me, the Mate X looks like the most solid first step into a brand new form factor.

Obviously, the biggest concerns will be the lack of Google Play Services. Not to mention a potential $2000+ price-tag. I will say that at this point in time, as a first-generation version and for what the Mate X offers, that price does feel somewhat justified given just what it brings to the table.

Of course, how you feel about the outward display fold will no doubt be determined on how you use your device. Be sure to let us know your thoughts in the comments section down below — but remember to keep it civil.