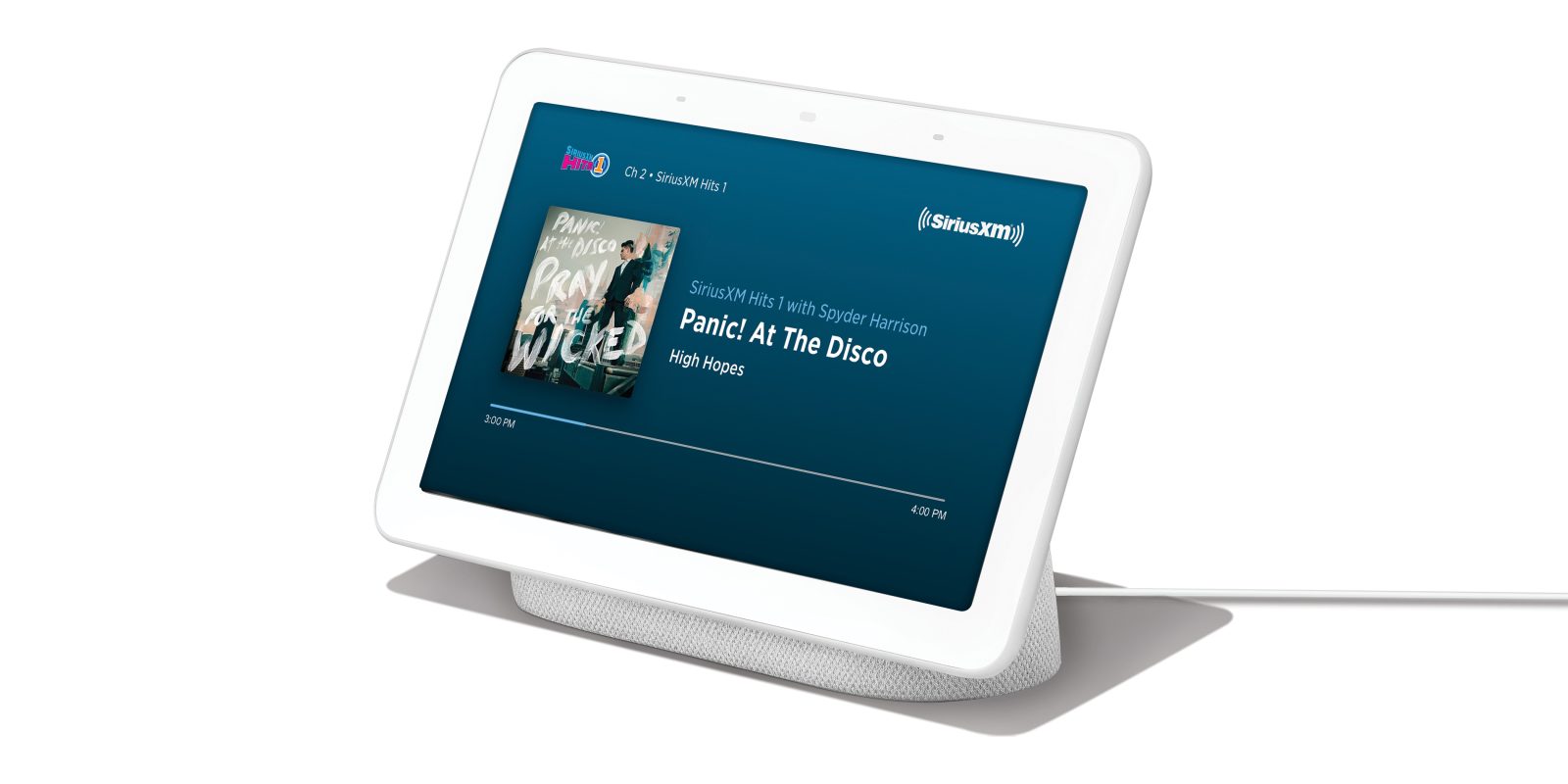 You can stream most major music services from a Google Assistant speaker or smart display, but today another one is being added. If you’re a SiriusXM Radio subscriber, the service now works with Google Assistant.

Available today for Google Home and Google Nest speakers and smart displays in the US and Canada, SiriusXM works with a simple “Hey Google” command. Commands include asking for specific stations or artist channels, but given how this service works you won’t be able to use it for specific songs or albums like you would with Spotify and other music services.

It’s great to see SiriusXM finally playing nice with Google Assistant seeing that the service has been working with Amazon’s Alexa platform for over two years now. New SiriusXM customers can also snag a three-month trial with the new Assistant integration too.

At a later date, SiriusXM will also support video content on Assistant smart displays such as the Nest Hub and Nest Hub Max.

SiriusXM Coming to the Google Assistant

SiriusXM’s acclaimed programming, featuring Howard Stern, commercial-free music, plus sports, talk, comedy, news, entertainment and more will be available in the coming days on Google Assistant enabled devices like Google Nest speakers and displays. Google and SiriusXM to bundle devices and subscriptions to help consumers save on both. SiriusXM video, featuring SiriusXM hosts as well as exclusive musical performances from top artists, will be available later this year on Nest Hub and Nest Hub Max

NEW YORK – October 30, 2019 – Google and SiriusXM today announced that SiriusXM will be available on Google Nest smart speakers and displays via the Google Assistant, bringing seamless access to SiriusXM’s acclaimed lineup of audio entertainment – featuring Howard Stern, hundreds of commercial-free music channels, plus news, comedy, talk, live sports and more – to tens of millions of homes across the country. Rolling out over the next week, users will see SiriusXM’s extensive lineup of programming in the Google Home app, available on iOS and Android devices.

Music lovers will be able to use the Google Assistant to enjoy SiriusXM’s hundreds of commercial-free music channels. This includes exclusive artist-based channels like Tom Petty Radio, Eminem’s Shade 45, The Garth Channel, and LL COOL J’s Rock the Bells Radio, plus more than 100 recently added SiriusXM Xtra channels that deliver music for every mood and occasion.

Subscribers can also get Howard Stern’s two exclusive SiriusXM channels and a host of other channels carrying spoken word programming from the worlds of sports, entertainment, news, lifestyle and comedy. This includes SiriusXM channels from popular brands like Netflix, Barstool Sports and The TODAY Show, one-of-a-kind personalities such as Jenny McCarthy, Kevin Hart, Andy Cohen, Joel Osteen and Chris “Mad Dog’” Russo, enlightening and instructive channels such as Doctor Radio Powered by NYU Langone Health, and much more. For more on all that SiriusXM offers go to SiriusXM.com.

Later this year, subscribers with a Nest Hub or Nest Hub Max will be able to watch SiriusXM video, giving them access to a selection of video clips curated specifically for the Google Assistant that will allow them to see exclusive in-studio performances, interviews and other entertaining moments at SiriusXM.

“The Google Assistant and Google Nest’s portfolio of connected home devices, including the Google Home and Nest Hub, utilize intuitive voice recognition technology that make them a great way for subscribers to experience SiriusXM’s compelling and exclusive content in the home,” said Jennifer Witz, SiriusXM’s President, Sales, Marketing and Operations. “We are excited to add Google Nest and Google Home devices to the roster of in-home listening options for our subscribers with streaming access, which now number more than 30 million. Teaming up with Google to deliver great deals on our unparalleled bundle of programming and Google’s outstanding products is a win-win for consumers this holiday season.”

Google and SiriusXM expect to introduce a combination of offers to consumers.  With any purchase of a Google Nest or Google Home device, eligible customers will be able to get three months of SiriusXM programming free.  Eligible customers who already own a Google Nest or Google Home device are expected to be offered three months of SiriusXM free with the purchase of a SiriusXM All Access or SiriusXM Premier Streaming subscription.  SiriusXM also plans to offer SiriusXM Select, SiriusXM All Access and SiriusXM Premier Streaming subscriptions at promotional rates that will be bundled with a Google Nest Hub.  Each such consumer offer will be governed by their Offer Details and the related terms and conditions.

The new availability of SiriusXM on the Google Assistant is the latest collaboration between Google and SiriusXM.  Earlier this year the SiriusXM app launched on Android TV, and SiriusXM subscribers can also cast their favorite SiriusXM programming from their phone, tablet or Chrome browser to TVs or speakers using Chromecast.

SiriusXM offers various subscription levels. Go to SiriusXM.com/subscriptions for more details on the programming and packages that SiriusXM offers subscribers in the car, at home, on a phone, online and on connected home devices.