Sign In with Google shows a warning when using Chrome Beta, Dev, or Canary

For those who like to live life on the bleeding edge, Google offers versions of Chrome that update more often than normal, ranging from every few weeks to nearly every day. However, Sign In with Google is now showing a warning to those who use Chrome Beta, Dev, or Canary that some Google services may not be available to them.

Google has now added a warning to the Sign In with Google dialog if it detects that you’re using a version of Google Chrome other than the normal “Stable” version.

Some Google services may not be available.

Some Google services may not work with Chrome Beta. If you encounter problems, switch to a Stable version of Chrome. 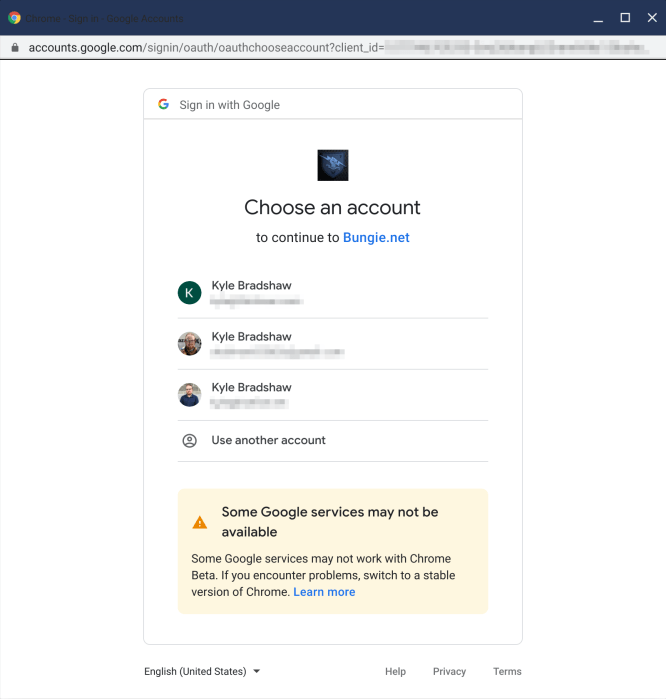 Following the “Learn more” link reveals that the issue is tied to Chrome’s new cookie protections, which prevent cookies from being misused. The warning is in place because these protections have the potential to break certain websites and services, particularly those that relied upon insecure methods of sharing cookies between sites.

According to the documentation, if you’re on a Beta, Dev, or Canary build of Google Chrome, there’s currently a 50% chance that these experimental protections are enabled. Thankfully, if the protections are indeed enabled on your device, and you run into issues with a particular website, it’s easy to disable them. Just head to chrome://flags and set this flag to “Disabled.”

Treat cookies that don’t specify a SameSite attribute as if they were SameSite=Lax. Sites must specify SameSite=None in order to enable third-party usage.

Regardless of whether the cookie protections are active or manually disabled, the warning will still appear on the Sign In with Google page, as it will still detect that you’re on a less than stable version of Chrome.