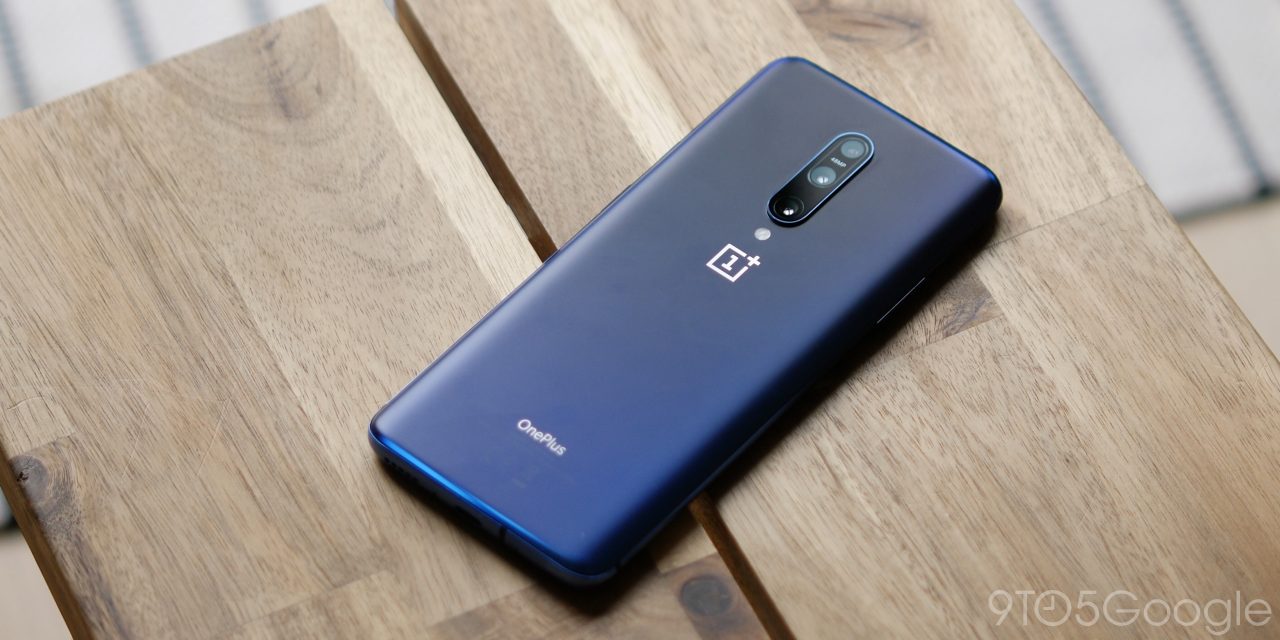 When the OnePlus 7 Pro was released, it was the culmination of a five-year cycle of constant improvements from the firm behind the true start of the budget flagship revolution.

This device is the beginning of a separation of what we would usually consider “affordable” and “premium.” And in the process, it’s rewritten the entire approach that OnePlus had become known for over the previous half a decade.

The brand has grown from self-styled “humble” beginnings, intense corner-cutting, and device compromise. The OnePlus 7 Pro is the start of something completely new — and boy did they nail that first try at truly taking on what we consider the best in the business.

A mix of ultra-lightweight software and the latest internal hardware has been one of the core reasons for the growth of OnePlus as a player in the smartphone market. Yet, even when stepping fully into the premium smartphone arena, there are still some odd little omissions from the OnePlus 7 Pro that make little to no sense, even at this stage of the brand’s existence.

In the early phases of OnePlus’ smartphone endeavors, this could be easily forgiven, but now seems more like stubbornness and clashes with the “Never Settle” ethos.

Despite these minor niggles and nitpicks, given that the OnePlus 7 Pro has now been available for well over six months at this stage, what is our extended verdict? 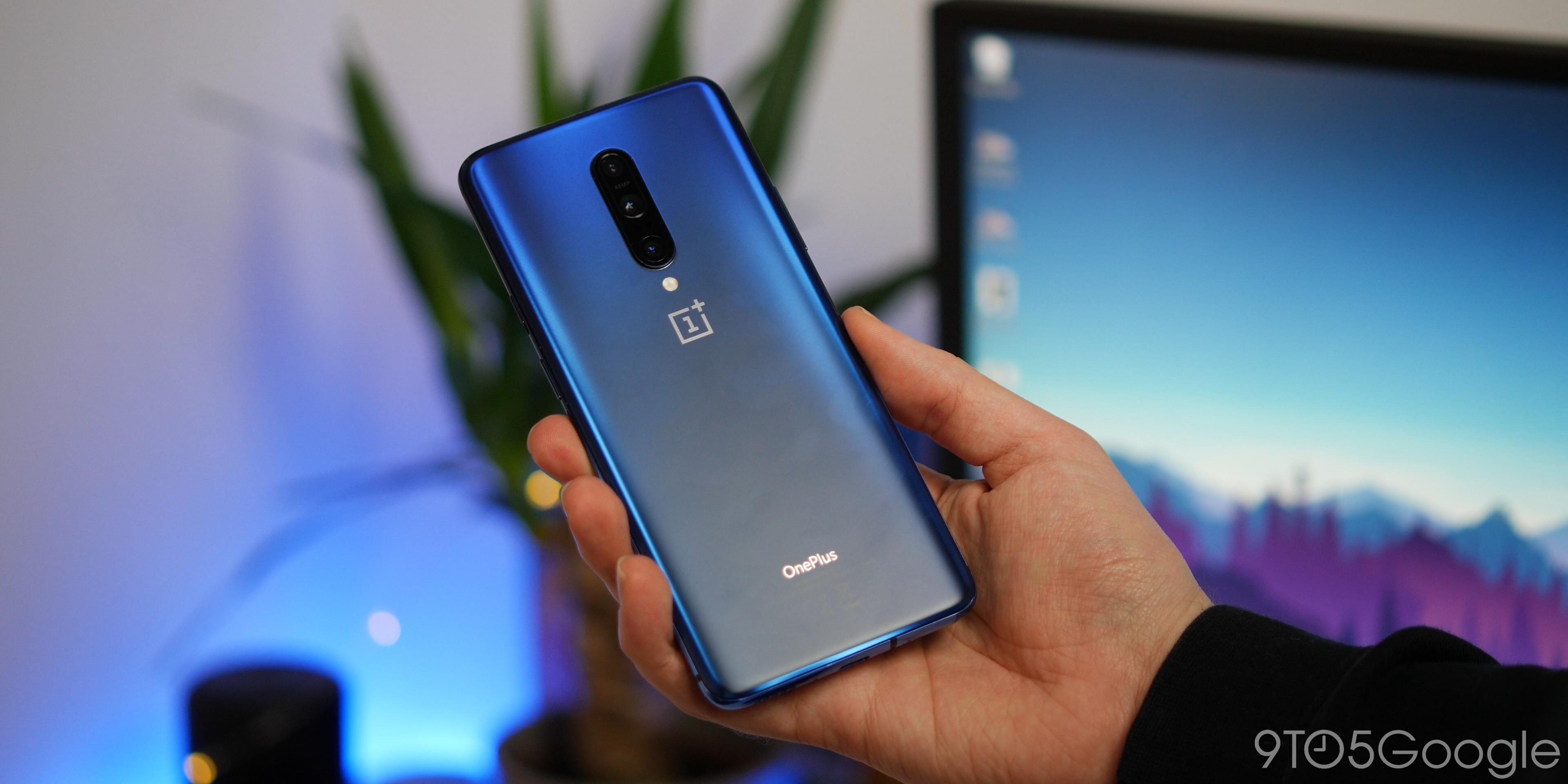 There are very few devices on the market that can define the rest of the industry. The iPhone and Samsung Galaxy line have done more in the past four or five years than almost any others. Take just one glance at the OnePlus 7 Pro and you can see the influences, but the omission of a display notch in favor of a pop-up camera is one that really makes this device stand out.

My biggest gripe, though, is just how big this darned device is. It’s simply massive — and I say that with far larger-than-average hands. The display real estate is just insane. You get so much screen to play with and enjoy, but it’s very hard to manage at times. Given that this is also a QHD+ 90 Hz AMOLED panel, the experience is unrivaled. Media, games, and apps are all so much more immersive and are backed by some superb-sounding speakers.

I’ve seen many negative comments regarding the curved display, and curved displays in general. They seem to be universally hated among tech fans, and I feel like most of the time I agree. There can be no doubt that this is a gorgeous display, but the flat FHD+ display on the OnePlus 7T proves that getting rid of those curves is a sensible design decision. Phantom touches have been eliminated with software updates, but on release, there were numerous issues from disgruntled fans and OnePlus 7 Pro owners. 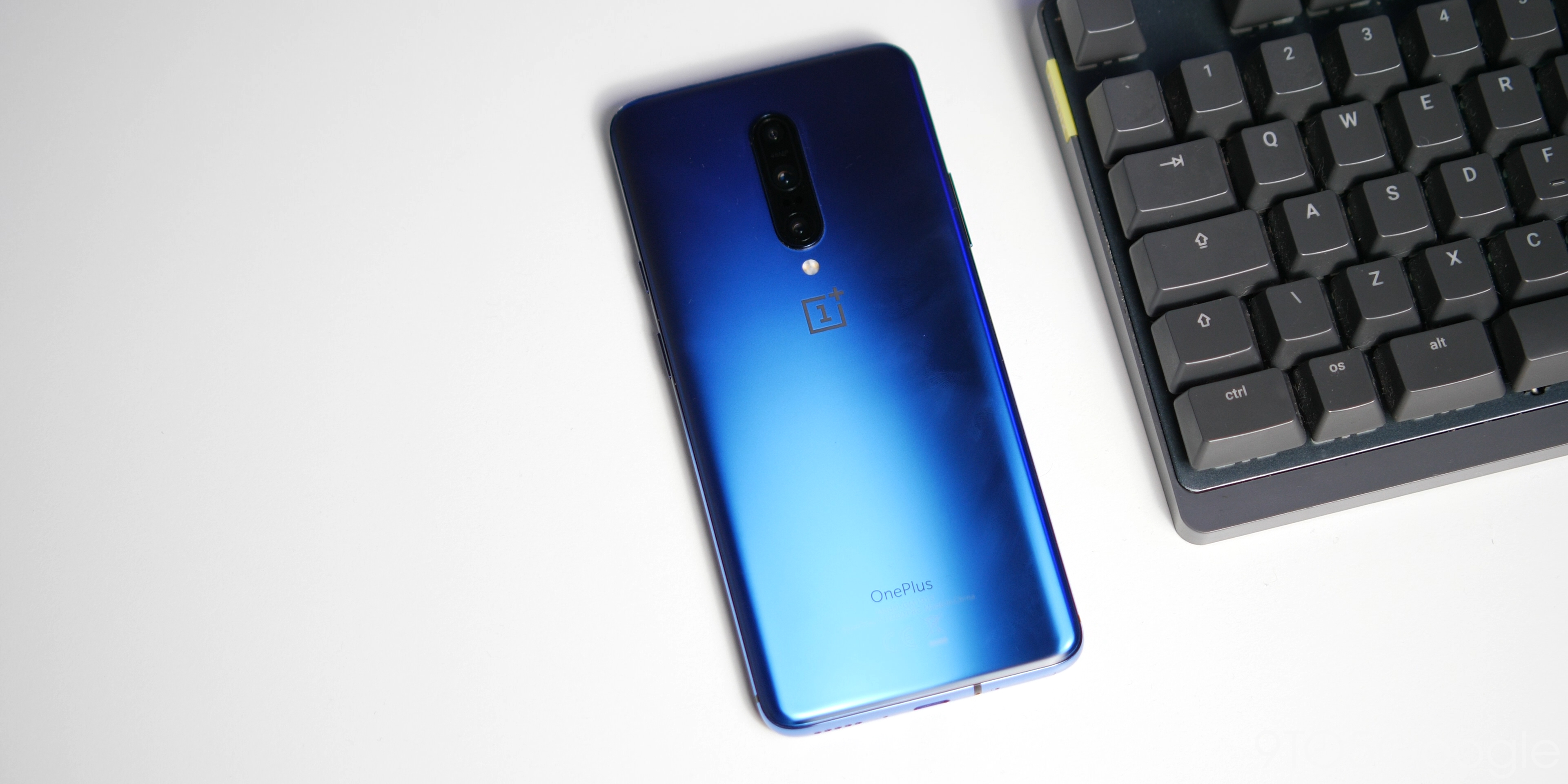 OnePlus also offers the 7 Pro in three distinct colors: Almond, Mirror Black, and the more prominent Nebula Blue. The Nebula Blue really does stand out in an increasing sea of two-tone, multi-colored smartphones. It really does look stunning in different or varied lighting conditions. However, OnePlus has refined the color a little more with the release of the 7T Pro. That said, when blue devices are few and far between, this is one of the best for those not wanting a generic black box in their pocket.

Because of that stunning design, it seems a real shame to put the OnePlus 7 Pro in a case, but it’s understandable that you might want protection from the elements or the everyday threat of a drop. The satin finish still feels amazing in the hand, and something I wish more manufacturers would adopt over the next 12 months. I’ve got a few scuffs here and there from pocket zips and the odd bit of sharp dirt in my pockets or on my desk. Despite being a glass sandwich, it’s a surprisingly hardy handset that people ask me about every time I take it out. 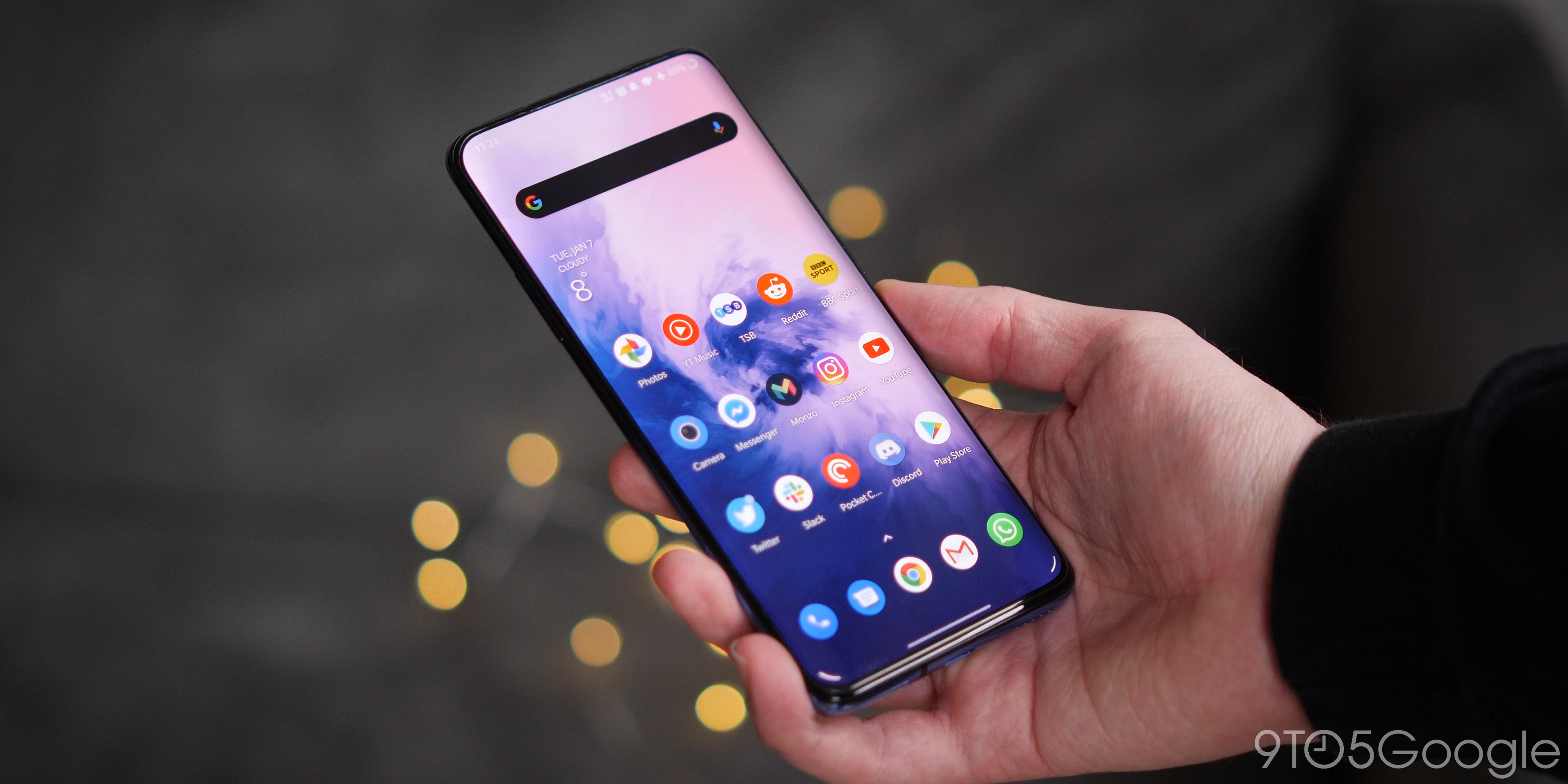 Android 10 has been available for the OnePlus 7 Pro for a little while now, and OxygenOS 10.0.1 is a fantastic advert for the OS in general. Given that you get flagship specifications, this lightweight version of Android 10 is blisteringly fast. You can run anything and everything available on the platform without hiccup or slowdown.

OnePlus made the intelligent decision to slap in UFS 3.0 storage into the 7 Pro, too. This means apps, games, menus, and more load more or less instantly. When you combine this with the lightweight OS skin and 90 Hz panel, there is no other smartphone that feels as fast as the OnePlus when at full tilt. It’s still as fast as the day it was released, and I’d argue that Android 10 has also enhanced the sense of speed, yet more so.

I think it’s at this point that we need to discuss the OxygenOS Open Beta program. OnePlus is reasonably good at keeping its devices up-to-date, but these Open Betas are a way to test-drive functions and features before they come fully fleshed out in regular stable updates.

For most people, we’d suggest sticking to stable releases for added peace of mind, but for the enthusiast, it makes almost all OnePlus devices that bit more enticing. You get a taste of things to come, and the OnePlus 7 Pro gets enhancements and improvements far ahead of schedule. 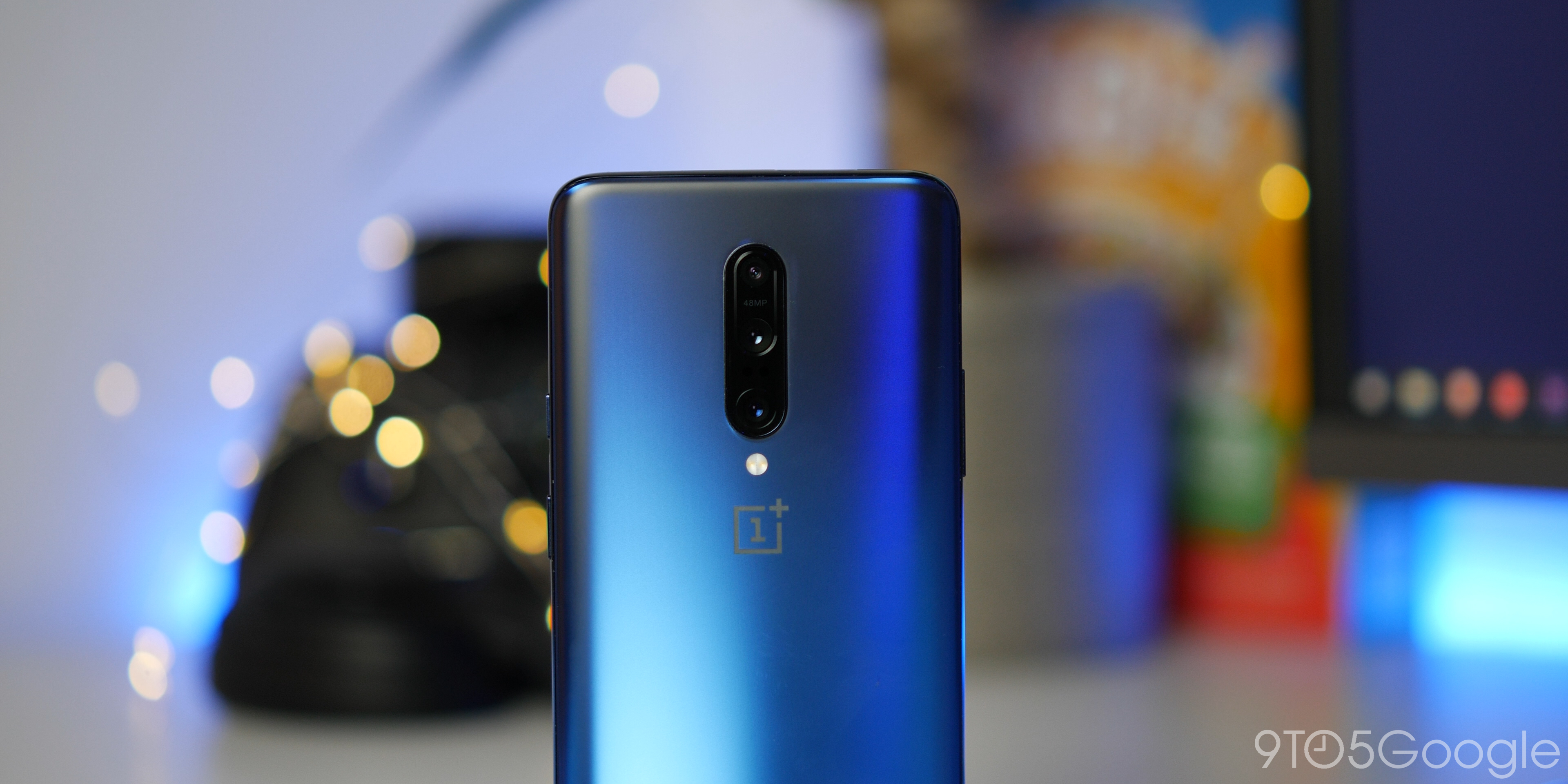 The camera is still the weakest aspect of all OnePlus smartphones, and unfortunately, that is still true of the OnePlus 7 Pro. It’s not quite up to the levels of the Galaxy S10, Note 10, or Pixel series, but it still takes impressive stills that for most people will be more than enough. They often lack the “wow” factor of other comparable flagships, and low-light performance is a hit-or-miss affair.

A series of software updates have improved the camera quite substantially though. I’m still never 100% confident though that I’ll get the best results possible — and it’s one of the reasons that I always carry another smartphone for those “just in case” moments. I understand that I’m in quite a privileged position being able to do that, but for most people, they will no doubt be happy with the end results.

Having three distinct focal lengths does give you a myriad of options for photography — and some solid video options, too. Many will love the inclusion of the ultra-wide-angle lens — and with good reason. You can get so much more in a frame but lose some detail.

The 3x telephoto zoom lens isn’t quite 3x, as it’s actually 2.2x with a digital crop so that you don’t lose any detail. Personally, that isn’t 3x in the same way that cropping in 10 times isn’t 10x zoom, but smartphone cameras do have limits and far less moving parts. Most people simply won’t care enough to be annoyed by that — which is fine, but I wish OEMs would just be honest upfront.

Video is one area where OnePlus does far better than most. I like how quick the autofocus is, and the results are impressive at all resolutions. The most disappointing aspect is the lack of video recording using the ultra-wide-angle lens. The workaround for this was also closed off when the OnePlus 7 Pro was upgraded to Android 10. You can record ultra-wide video if you’re enrolled on the OxygenOS Beta program and have at least Open Beta 1 installed — it’s still limited to 30 fps, though. 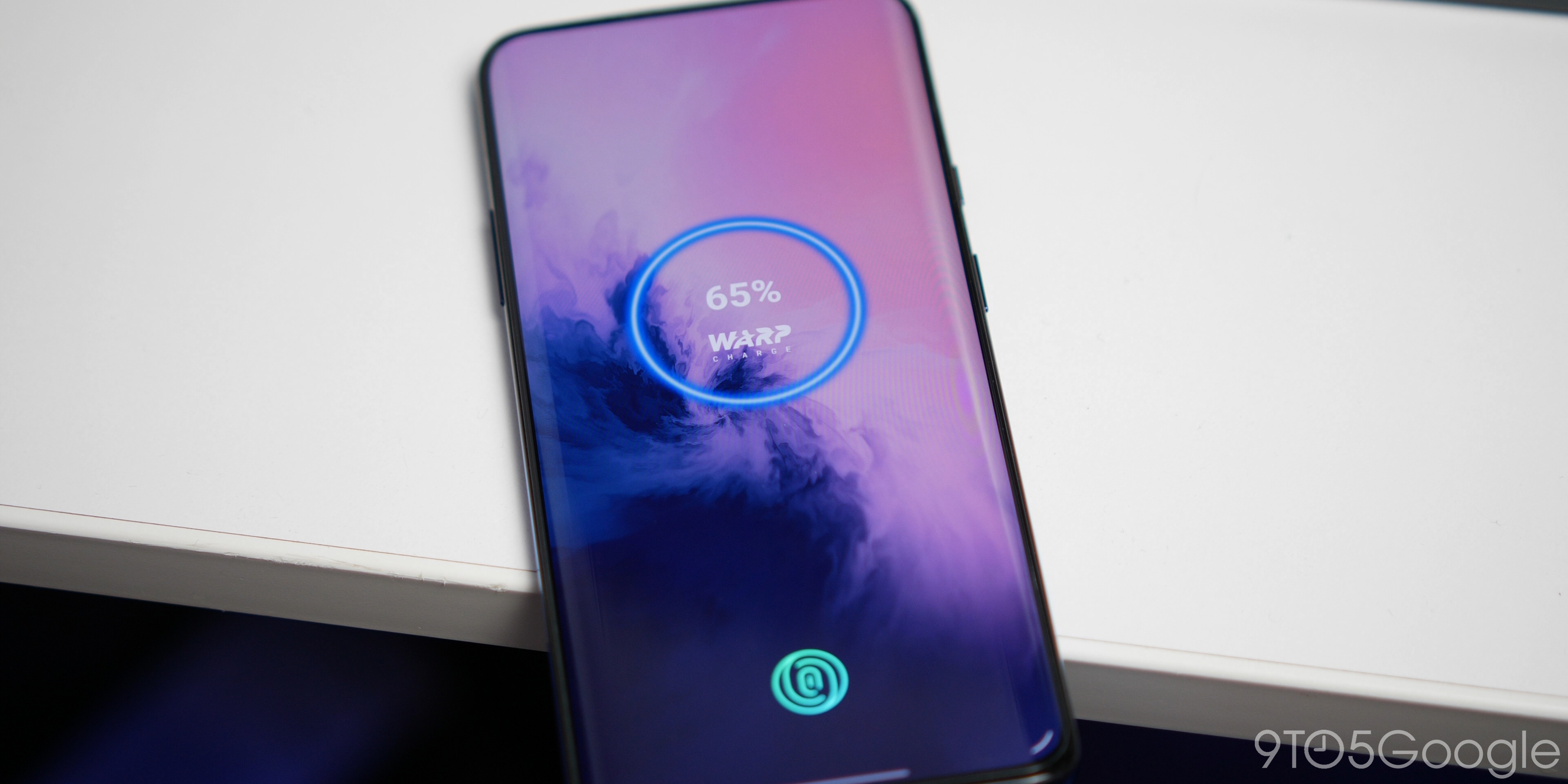 Let’s talk quickly about the lack of wireless charging because it still feels like a glaring omission on a “premium” smartphone. Not being able to use your wireless chargers is frustrating. However, Warp Charge 30 is so awesome in practice that not having wireless charging included still feels less like a major issue. That said, I would still like to be able to slap a future OnePlus device on a wireless charger and top up the battery that way. Maybe we’ll see Wireless-Warp Charging one day…

At 4,000 mAh this is not a small battery, which is good, as the 90 Hz QHD+ display needs plenty of juice. While I bemoan using Screen on Time as a metric for lifespan, I do regularly see six or so hours on my device. That isn’t earth-shattering, but is likely more than enough for most people. Again, the topping-up process is especially rapid, thanks to that Warp Charger.

Charging is so fast that you don’t need to follow the tried-and-tested overnight charging that you might be used to. Twenty to 30 minutes plugged into the Warp Charge power brick, and you can literally get 70% recouped, and you don’t need to sit and wait to make meaningful lifespan gains. I’m not sure how this will affect lifespan over the course of a couple of years, but right now I haven’t seen any noticeable issues.

Turning down the resolution to 1080p isn’t something I was too happy to do, but in the quest for battery gains, I thought it might be worthwhile. I was actually shocked when I got more or less the same lifespan. I didn’t want to turn off the 90 Hz refresh rate, though, as it really is nice when in full flow.

Despite the fact that the OnePlus 7 Pro came out in the early half of 2019, it is still arguably the best value premium smartphone you can pick up at this very early stage of 2020. It excels in all the areas that matter most on a daily basis. Exceptional performance, an almost unmatched display, and reasonably solid battery longevity that can be topped up in super-quick fashion.

The design is exactly where smartphones have been steadily heading since the Samsung Galaxy S8 completely redefined what we thought a smartphone should look and feel like. It’s also premium in almost every single way, and yet manages to do so at a price that is far lower than the more established competition. If you want a smartphone that will last you two or three years and still feel as fast and fresh as the day you bought it, then the OnePlus 7 Pro is that and more — and now much cheaper than at launch.

Where can I get the OnePlus 7 Pro?

With the OnePlus 8 series on the horizon, you might want to hold out a little longer to see just what the next generation brings to the table. That said, the OnePlus 7 Pro still remains one of the very best flagship smartphone experiences you can buy — even at this early stage of 2020. Starting at just $499 and going up to around $579 for the top-spec model, you get so much for your money that it’s hard to complain.