[Update: Fixed] RCS in Google Messages on Android is currently down

RCS is widely rolled out in the US, Mexico, UK, and France after Google took charge of the rollout last year. There are now reports this afternoon that RCS is down, with many Android users stuck on the “Connecting…” status in Google Messages.

The first reports of RCS with Google Messages going down came in at around 3:30 p.m. PT. They span users in a handful of countries (across the US, Canada) on different carriers (AT&T, Fi, Rogers, Verizon) and using different Android devices, including Pixel and Samsung.

Beside being unable to send messages over Rich Communication Services, the outage is also evident when visiting Settings > Chat features. The “Status” just notes “Connecting…” in orange and “Connection in progress,” but never resolving.

This outage comes as Google earlier this month detailed that it’s shutting off the Messages trick for enabling RCS worldwide. However, devices that received RCS naturally — without leveraging the hack — are also down today. In our testing, Verizon’s non-Google-backed implementation also looks to be offline.

It’s possible that the point of failure today is the RCS hub/interconnect that bridges different carriers and allows for global interoperability.

Update: After 90 minutes, RCS looks to be back for all affected users at 5 p.m. Try rebooting your device if it’s not yet back online. We’ve reached out to Google for an explanation of what happened.

Update 2: Even with the status restored, some users are encountering issues sending messages. 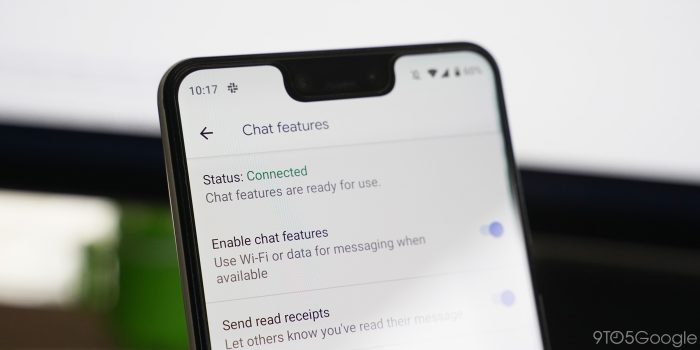