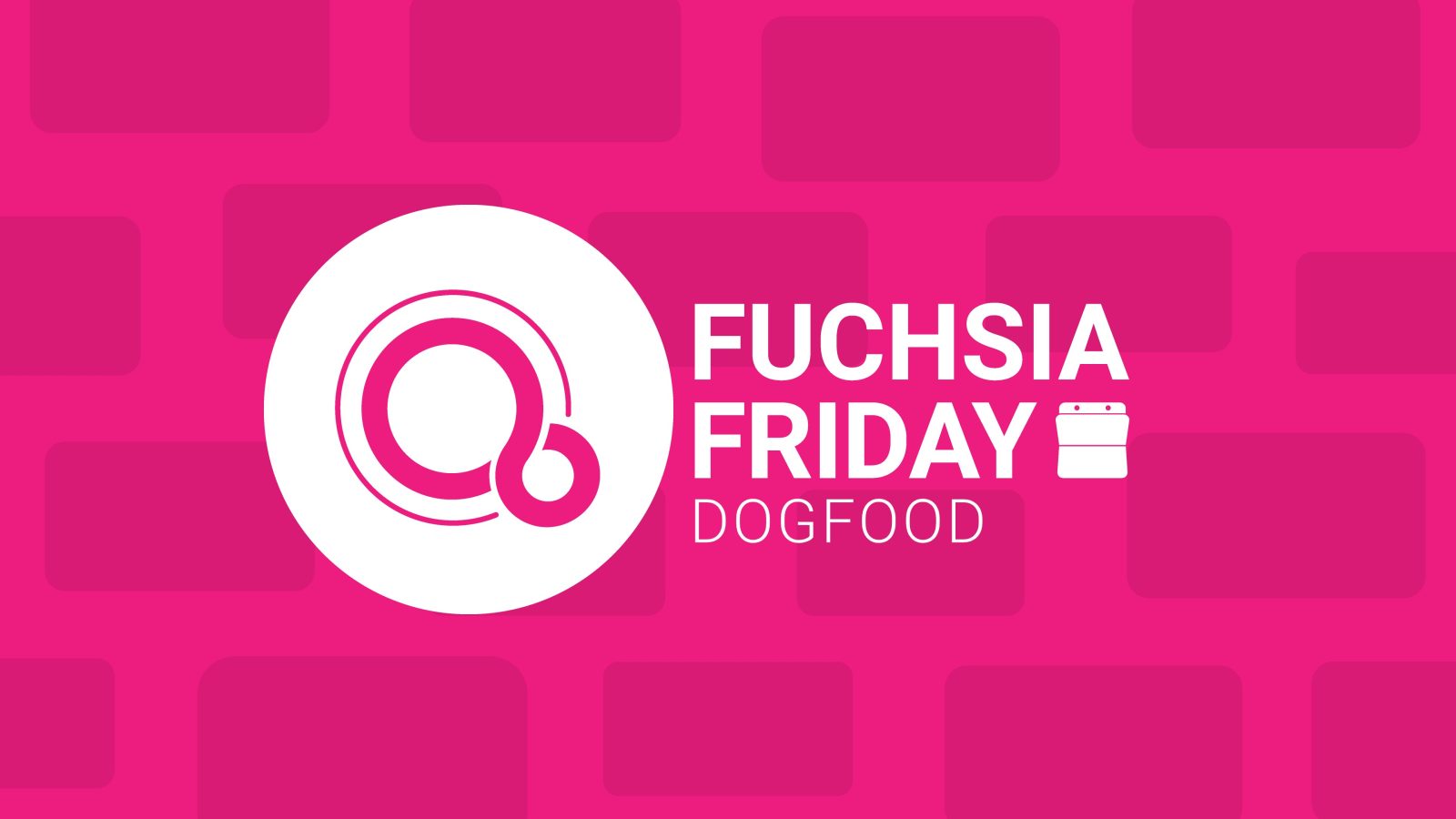 In software development, and especially Google’s development cycles, there’s usually a point where the developers “eat their own dogfood” or use their own work, before letting normal users try it. It seems that Google’s long-in-development Fuchsia OS may finally be reaching this “dogfood” stage.

Beyond the normal public testing stages like Alpha and Beta, Google has quite a few internal testing stages, all stemming from the same “dogfood” name.

For example, when Google+ was still in an early phase of development, before doing a company-wide dogfood test, they instead did a narrow “fishfood” test, riffing off the project’s aquatic codename “Emerald Sea.” Since then, the fishfood name has stuck, with other Google teams using it for their earliest testing period.

Additionally, Google sometimes has a slightly wider “teamfood” stage of testing between fishfood and dogfood, with dogfood usually being the last, nearly company-wide internal test before “production” or public testing.

Over the last year, there’s been signs that at least parts of Fuchsia — if not the OS as a whole — have gone through the fishfood stage and teamfood stage of development testing. The next phase, of course, is dogfood, which would open up Fuchsia to broader testing throughout Google.

According to a handful of recent code changes [1] [2] [3], that’s exactly what’s about to happen. In one change — related to “Omaha,” the same update management system used by Chrome and Chrome OS — we see the developer uses a pair of commands to test their change, one of which stands out.

The second command simply tells the Fuchsia device to look for updates through “Omaha.” From these, we can see that Google has a “dogfood-release” update channel on which some developers have already begun testing.

So what would a dogfood test of Fuchsia actually look like? From what we’ve learned over the years, Fuchsia is able to run on desktops, laptops, tablets, Chromebooks, phones, routers, smart displays, and more. That means a dogfood test could be for any or all of these different purposes for Fuchsia.

Thankfully, from a comment on another code change, we can confirm at least one way that Fuchsia will likely be dogfooded. In a longer discussion about how Fuchsia’s update system works, a Googler shares two very interesting URLs — or at least something designed to look like a URL.

The first “URL” is interesting in its own right, but we’ll save that for another day. Focusing on the second URL, let’s break it down its various pieces, working our way backwards, as URLs are typically read. Obviously the “fuchsia.com” ending ties into Google’s ownership of that domain.

Next, we find “astro.” Avid readers of this column will remember that “Astro” was one of the earliest Fuchsia prototype devices, which was later found to be Fuchsia’s codename for 2018’s Google Nest Hub (known at the time as the Google Home Hub).

The next portion to the left, “dogfood-release,” mirrors the update channel we saw above, and “arm64” describes the general type of processor found in the Nest Hub.

So putting these URL pieces back together, we get the picture that Googlers may be doing this dogfood test of Fuchsia on at least the Google Nest Hub. Considering the Nest Hub doesn’t have much of a way to connect a mouse or keyboard, this test is more likely about the possibility of using Fuchsia instead of Google’s Chromium-based “Cast Platform” to power their Assistant smart displays, rather than a full operating system experience like you would expect on a phone or laptop.

We already learned at Google I/O last year that some of the Smart Display UI seen on the Nest Hub and Nest Hub Max is an app called “Dragonglass,” which we later found is powered by Google’s cross-platform Flutter SDK. That being the case, it wouldn’t be hard for Google to swap the Cast Platform out for Fuchsia without any noticeable differences, as Fuchsia has native support for Flutter apps.

What’s next on the menu?

Following Google’s usual development and release flow, dogfood should be the last stage of testing before reaching the public. If that final internal test goes well, it’s entirely possible that Google could move forward with bringing Fuchsia to developers sooner rather than later.

That said, I wouldn’t get your hopes up for a Google I/O 2020 reveal. The fishfood stage seemed to take a minimum of four months, at least between April and August 2019, and there was six months of teamfood testing between at least August 2019 and February 2020. Surely a much wider dogfood test would take just as long, if not longer, putting its end date into the latter half of the year.