With the launch of Stadia’s free tier, Google gave both new and existing users two months of Pro. Anyone can therefore take advantage of May 2020’s three new Stadia Pro games, though there’s effectively a fourth title.

Update 5/1: The May 2020 games — Zombie Army 4: Dead War, SteamWorld Heist, and The Turing Test — are now available for Stadia Pro subscribers. Like in past months, the Pro titles went live at midnight PT.

Starting today, PlayerUnknown’s Battlegrounds – Pioneer Edition will be available to claim for all Stadia Pro members. Normally $39.99, it includes the PUBG base game ($29.99), Survivor Pass: Cold Front, and a Stadia exclusive skin set.

Meanwhile, May sees a continuation of three games being added to the monthly $9.99 subscription, starting with Zombie Army 4: Dead War. Normally $49.99, it is World War II-themed third-person shooter:

Hitler’s hordes are back for more in this spine-chilling shooter from the makers of Sniper Elite 4! Abominable occult enemies, epic weapons and a harrowing new campaign for 1-4 players await in 1940s Europe, as you fight to save humankind from undead Armageddon!

In SteamWorld Heist, you command a steam-driven pirate crew in a series of epic tactical shootouts. It’s turn-based strategy with a twist: You manually aim the guns of your robots, allowing for insane skill shots and bullet-bouncing action! As the captain you will board, loot and shoot your way through enemy spaceships. Overcome the challenges of the vast frontier by upgrading your recruits with unique abilities, weapons – and even stylish hats!

Rounding out the list is first-person puzzle game The Turing Test. Set on Europa, you can switch perspectives to solve challenges:

Upon arrival a series of puzzles awaits you – tests which, according to the station’s AI, Tom, can only be solved by a human. These puzzles have apparently been set by the missing ground crew – but why have they created them and what are they hiding from? 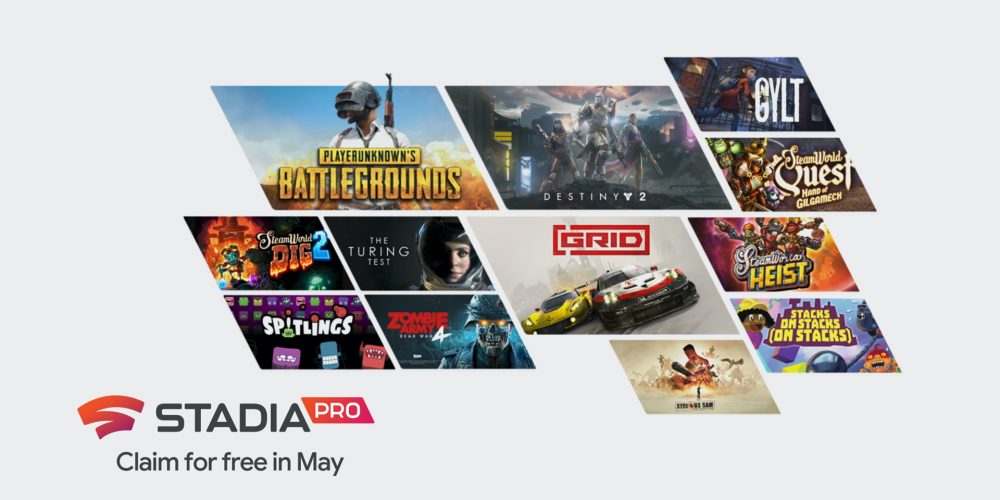 Thumper is dropping out of Pro on April 30. Five existing games will remain come May: Destiny 2: The Collection, Grid, Gylt, SteamWorld Dig 2, and SteamWorld Quest: Hand of Gilgamech.

Last month, the latest Pro titles went live at midnight PT. You can visit the Stadia Store on Android, iOS, or web to claim the Stadia Pro May 2020 games. They will join the Pro games carousel, or you can manually look for the listing.