With the year well under way, it’s time for the next round of titles available to subscribers of Google’s cloud streaming service. Two new Stadia Pro games will be available for February 2020.

Update 2/1: Gylt and Metro Exodus are now available to claim. You can do so by visiting the “Stadia Pro games” carousel in the Store or through the “All games” list. Google this month made the Pro titles available at midnight PT instead of the usual 9 a.m.

According to promotional materials viewed by 9to5Google, Gylt and Metro Exodus are coming February 1. The first game is Stadia’s only (timed) exclusive from Tequila Works and normally $29.99.

Face your fears in GYLT, a haunting tale about bullying and childhood nightmares, as you help Sally navigate a creepy world to rescue her missing cousin Emily. GYLT is available only on Stadia!

Metro Exodus is an epic, story-driven first person shooter from 4A Games that blends deadly combat and stealth with exploration and survival horror in one of the most immersive game worlds ever created. Flee the shattered ruins of dead Moscow and embark on an epic, continent-spanning journey across post-apocalyptic Russia in the greatest Metro adventure yet. Explore the Russian wilderness in vast, non-linear levels and follow a thrilling story-line inspired by the novels of Dmitry Glukhovsky that spans an entire year through spring, summer, and autumn to the depths of nuclear winter. 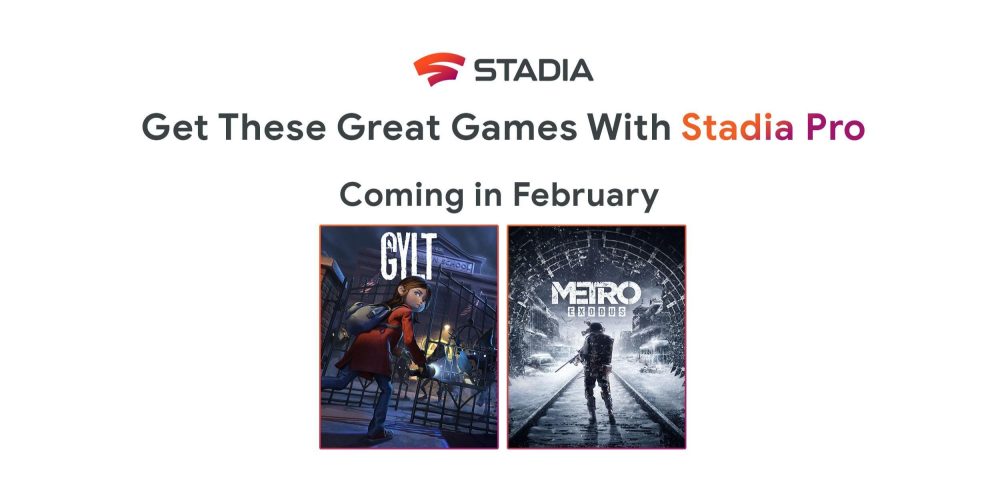 Dropping out of Pro are SAMURAI SHODOWN and Rise of the Tomb Raider: 20 Year Celebration. The latter title was just added last month, and is already set to disappear for new Pro customers at 9 a.m. PT on January 31, 2020.

Meanwhile, Thumper, Farming Simulator 19 Platinum Edition, and Destiny 2: The Collection will remain available to claim for a grand total of five titles.

This two-game cadence continues to surpass Google’s previous estimate that roughly one new game is added to Pro every month.

Starting Saturday at 9 a.m,, you can visit the Stadia Store on Android, iOS, or web to redeem the Stadia Pro February 2020 games. They will join the Pro games carousel, or you can manually look for the listing.