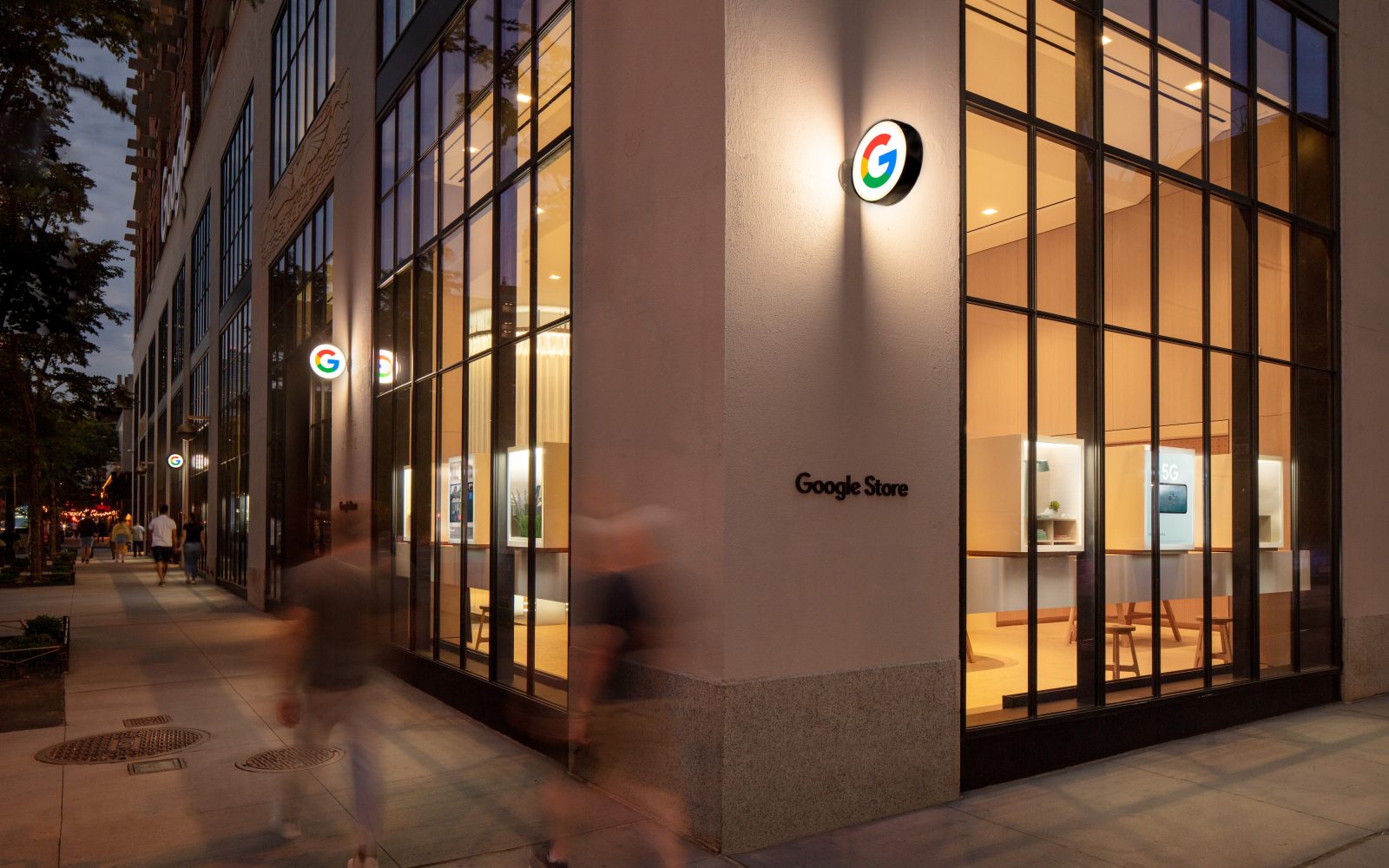 Tomorrow, the first permanent Google retail store opens its doors to the public in a project that the company has been working toward since 2016. Since there’s only one — with the company steadfastly not commenting on whether there will be more, here’s a tour of the site in New York.

The lineage of this store directly dates back to pop-up and holiday experiences that Google experimented with from 2016 to 2019. What Google took away from that effort was how visitors “valued high-touch interaction” with products. Its goal with a physical retail space today is to provide an immersive and direct introduction to products. Besides demoing devices, Google also sees it as an opportunity to collect immediate customer feedback.

In designing, Google set out to create a “warm and inviting” space that’s heavy on wood. Development involved creating a full-scale mockup in Mountain View, while NYC-based Reddymade was the designer.

Like its consumer products, sustainability was a key part of the design, and Google Store Chelsea has a LEED Platinum rating. The company says this highest possible certification for green construction is available to only 214 other retail spaces worldwide.

For example, the veneer on the walls is a soft gray responsibly sourced hickory, each lighting fixture is energy efficient and our custom cork and wood furniture was created with a local craftsman from Greenpoint, Brooklyn. We even attached our carpeting (which was manufactured with recycled materials) in a sustainable way.

The store is very wide — almost spanning the entirety of W 15th to 16th Street — but narrower than you’d expect. Areas inside are roughly laid out on three parallel lines (window, middle, and wall).

It all starts with the tall floor-to-ceiling windows that are filled with “Discovery Boxes.” There’s three to a window/bay and each has a different theme, like hardware sustainability in the left-most one. They are meant to pull you in, and well spaced so that you can see behind the boxes into the larger space.

These cubes have two active sides that advertise different product stories. From the street, you mostly get a diorama of sorts. The internal one has a custom transparent LED screen with an actual device “inside.” A counter with stools also spans each window with product in between each.

This middle line begins at the far left with a “Workshop” space and large “G” on the wall, as well as a screen on the front wall. This is where Google will host events: story time for families, cooking demos with Nest, photography lessons on Pixel, and YouTube concerts.

Next is the “Here to Help” support desk — marked by a circular neon sign hanging from the ceiling — where “associates” will be able to help with consumer products, both hardware and software services. This includes on-site, same-day Pixel repair for screens. This avenue directly connects to the broader Google Support organization for further help.

You then get a living room space to demo the experience of watching on a Chromecast with Google TV or playing with Stadia and listening to a stereo Nest Audio setup.

A mini-kitchen is there to mostly show off the Nest Hub Max and its recipe capabilities, while there’s a Pixelbook Go and Nest Wifi behind it. The Google Chromebook is also shown off again on a small desk at the left.

To the right of that is the “Google Imagination Space.” This 17-foot-tall circular glass structure is located near the main entrance and features custom interactive screens for rotating exhibits that lets visitors “experience the best of our products and technologies.”

We’re beginning with an experience built around Google Translate and our machine learning capabilities. As you speak to the exhibit, you’ll experience real-time translation of your speech into 24 languages simultaneously, and then learn how this all happens on the back end using several Google technologies. These same capabilities are also available across many of our devices — right in the palm of your hand.

Lastly, you get the corner Interactive Hardware Space for Pixel and Fitbit wearables. There are two desks topped with mostly phones, but there’s a Nest Hub Max (to demo Duo video calling) and Pixelbook Go (Better Together cross-device connectivity). Google also sells third-party accessories, while there’s a case wall to show off all colors.

The last line is the back wall. We see an embedded shelf that features branded merchandise. This includes colorful basketballs, Chelsea tote bags, Dino hats, shirts, and more. You then get more conventional items like Smart Displays, speakers, Wi-Fi routers, cameras, and streaming dongles. One thing you won’t find in the store is a cash register. Each employee has a handheld device to check you out, while everything is integrated with the online Google Store for in-store pickup options.

Meanwhile, in between the first and second shelf is a Nest Gallery Wall of 35 products in all the different color variants to help you decide what shade works best.

The last key part of the Google Store are three Sandbox spaces. The one for Nest is a living room with various smart home gadgets (lights, doorbell, etc.) that you’re prompted to activate with Google Assistant. Commands to try are projected onto the table in front of you with the space replicating the time of day.

Stadia’s Sandbox space showcases the game streaming service’s flexibility by allowing users to switch between TV, laptop, and phone screens. There are even directed sound bubbles above to allow several people to play simultaneously.

Finally, the Pixel area that advertises Night Sight. You’ll be able to take low-light shots against cool backgrounds and then have the photos sent to you.