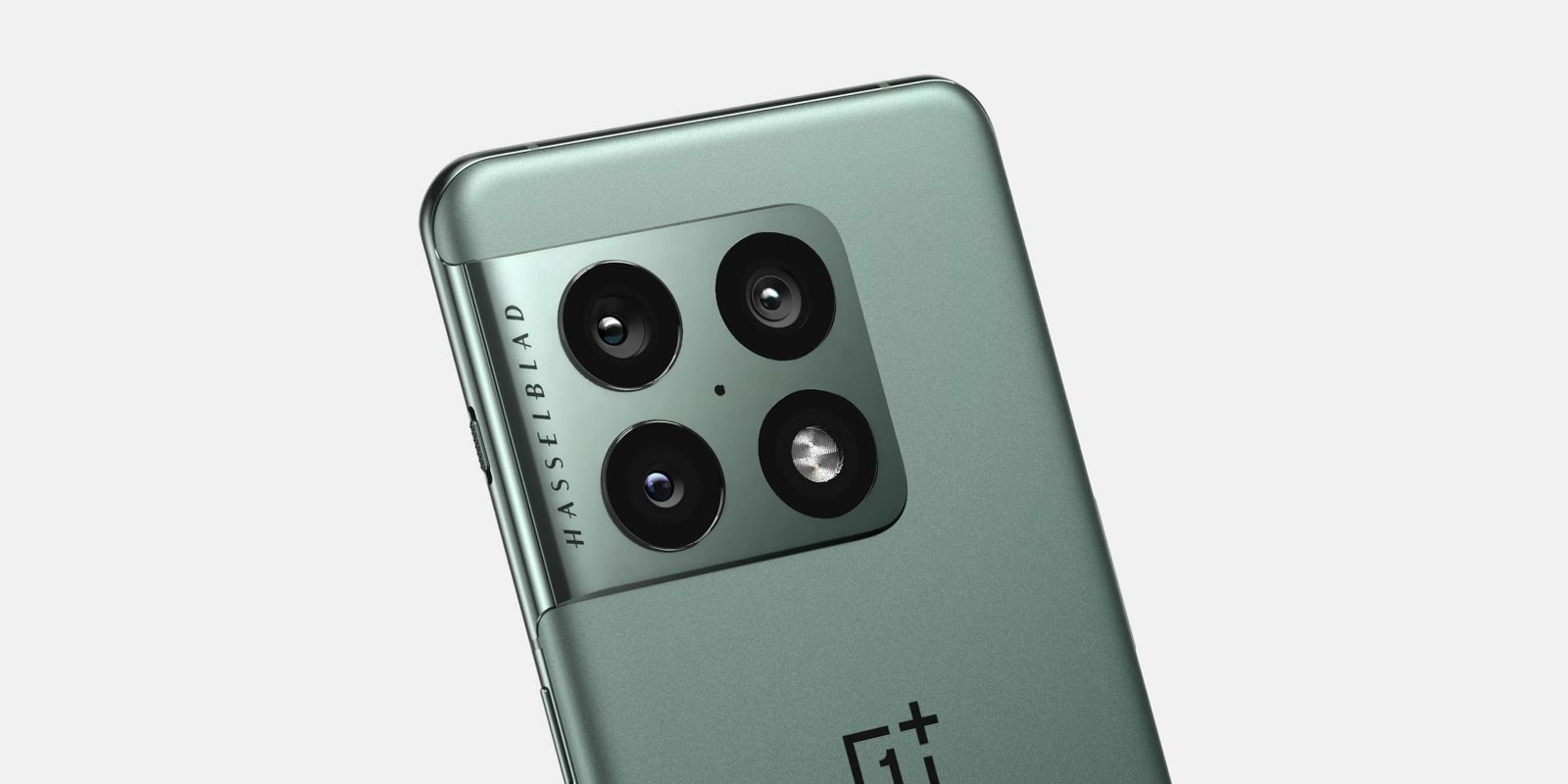 After skipping the OnePlus 9T this year in global markets, the OnePlus 10 series means that hopefully, we’ll see more upgrades and a great leap forward over the previous generation. With that in mind, this is everything we know about the upcoming smartphones.

Hardcore fans would definitely argue that OnePlus is on a downward spiral, but the sales figures in recent years say the opposite. We could be about to hit a bump in the road courtesy of a very divisive merger between OnePlus and Oppo hardware and software teams.

With that said, there will still be lots of anticipation to see just what the OnePlus 10 and 10 Pro bring to the table when they do eventually launch. Here’s everything we know about the next flagship OnePlus phones.

If there is one thing that OnePlus has done well in recent years its smartphone design. This time around, we’re unsure just how the OnePlus 10 series will fit into the mold. Renders of the proposed OnePlus 10 Pro we’re shared online, but we have yet to see just what the standard model will bring to the table.

There is a refresh of the design seen on the OnePlus 9 Pro with some definite inspiration drawn from the Samsung Galaxy S21 series courtesy of a chassis infused camera module. The cameras definitely resemble a stovetop with large lens holes an upper left positioning at the rear.

OnePlus is set to retain soft curves at the rear and a curved display is also retaining an upper-left punch-hole – which circumvents the recent industry-standard central selfie camera cutout. It’s clear that for 2022, OnePlus is tweaking the design formula rather than trying to reinvent things and @OnLeaks early renders more than indicating that will be the case.

It’s also suggested that the OnePlus 10 Pro will come in a revised Alpine Green color alongside a stealthy matte black. It’s unclear though if we’ll see region and storage-specific color options this time around.

If we follow the established track record of OnePlus, we can expect the 10 series to be a true out-and-out flagship. A partial list of specifications also suggests the same.

The display will be a 6.7-inch QHD+ LPTO AMOLED panel at 120Hz, the same size and refresh rate as the OnePlus 9 Pro. One downside here is that curved panel but while there is no explicit confirmation we would expect OnePlus to continue with an in-display fingerprint scanner.

Under the hood, up to 12GB of RAM and up to 256GB of UFS 3.1 storage will be paired with the next-generation Qualcomm Snapdragon flagship. Thanks to the recent launch, we know that the Snapdragon 8 Gen 1 processor is set to provide a notable jump over the Snapdragon 888 and 888+.

This rumor also suggests that the OnePlus 10 Pro is going to up the battery capacity to 5,000mAh with even faster charging than ever before. We could see 80W wired charging, which would no doubt improve upon the super fast 65W speeds seen on the OnePlus 9 Pro. Wireless charging is set to remain at 50W.

Unfortunately, no evidence has been shared to confirm the OnePlus 10 internals. Should we see a similar standard and Pro setup as used in years prior, it’s likely that many of the core internals will remain the same with downgrades in a few areas. However, we do not know at this stage.

The OnePlus 10 and 10 Pro are set to launch with Android 12 pre-installed. But for anyone unaware, earlier in 2021 we saw OnePlus CEO Pete Lau confirm the merger between the software teams of OnePlus and Oppo. Lau referring to this move as the “OnePlus 2.0 phase.” Sadly, this move will undoubtedly concern many longtime fans.

Since that announcement, we’ve seen the official release of OxygenOS 12 based upon Android 12 atop ColorOS. OxygenOS is now a skin for ColorOS rather than its own individual build and it is further from the clean almost Pixel-like experience it was once before. We’ve seen a fairly slow downward spiral from what was once one of the best alternative versions of Android out there.

A number of changes that you’ll notice right away include app icons, fonts, animations, and a general shift towards the ColorOS design and operational methodology. Popular OxygenOS features are still retained such as Zen Mode with enhancements to the Shelf, Notes and even the Canvas AOD customization option.

In essence, the OnePlus 10 series will launch with a version of OxygenOS that many fans will simply not recognize. Whether it’s too much of a departure from the convention will be up to you. OxygenOS 12 is not completely terrible, it’s just different.

Despite the hype and expectation surrounding the Hasselblad partnership announced alongside the OnePlus 9 series, it’s easy to say we didn’t get the outright flagship camera we had hoped for. That is not to say the camera on the OnePlus 9 and 9 Pro was bad, it just wasn’t quite what we’d thought it would and could be given the pre-release hype.

The OnePlus 10 series is not bringing such a big overhaul but more of a fine-tuning with a triple camera setup retained at the rear. Of course, on the OnePlus 10 Pro, we’ll see a new physical layout but a somewhat familiar 48-megapixel main sensor, 50-megapixel ultrawide and 8-megapixel telephoto zoom lens setup.

It seems as though the two-megapixel monochrome sensor could be ditched this time around but the selfie camera is set to take a major step up to 32-megapixels – which doubles the resolution of the OnePlus 9 Pro selfie camera.

We’re also expecting to see some camera UI tweaks and tuning to hammer home the Hasselblad partnership. It’s highly likely that we’ll see more features and functions based upon existing Hasselblad cameras, such as the X-pan mode that was added to the OnePlus 9 series via an OTA update.

Thanks to Pete Lau, we know that at the very least the OnePlus 10 Pro is set to be unveiled earlier than ever before. There was no mention of the standard OnePlus 10, but it could be that the focus is solely upon the flagship device – which some might argue has always been the case.

January 2022 is the proposed launch timeframe but that looks as though it will only apply to China. Another tidbit from earlier in the year indicates that global markets will see the OnePlus 10 and 10 Pro in or around March or April 2022. It seems a short exclusivity period will apply to China before we get to see the OnePlus 10 series elsewhere. With OnePlus now having closer ties to Oppo, this follows Oppo’s strategies and release patterns.

Disappointingly, we simply have no information on the potential price point of the OnePlus 10 or 10 Pro. It’s is no great secret that we’ve seen OnePlus device prices balloon in recent years and skyrocket toward the $1,000 barrier. The entry-level OnePlus 9 Pro was priced at $969, and we’d expect the OnePlus 10 Pro to be in or around this ballpark figure. That said, we simply cannot say for certain at this stage.

What are you hoping to see from the OnePlus 10 series?

We want to open up the floor to you: What beyond the leaks and even including the leaks would you like to see come launch day? We are now on a countdown to the as-yet-unknown release to get to see the OnePlus 10 and 10 Pro in the flesh for the first time.

Let us know in the comments section what you are hoping (or not hoping) to see from the OnePlus 10 and OnePlus 10 Pro. What OnePlus 10 series rumors are you excited or disappointed by? Remember to keep it civil.