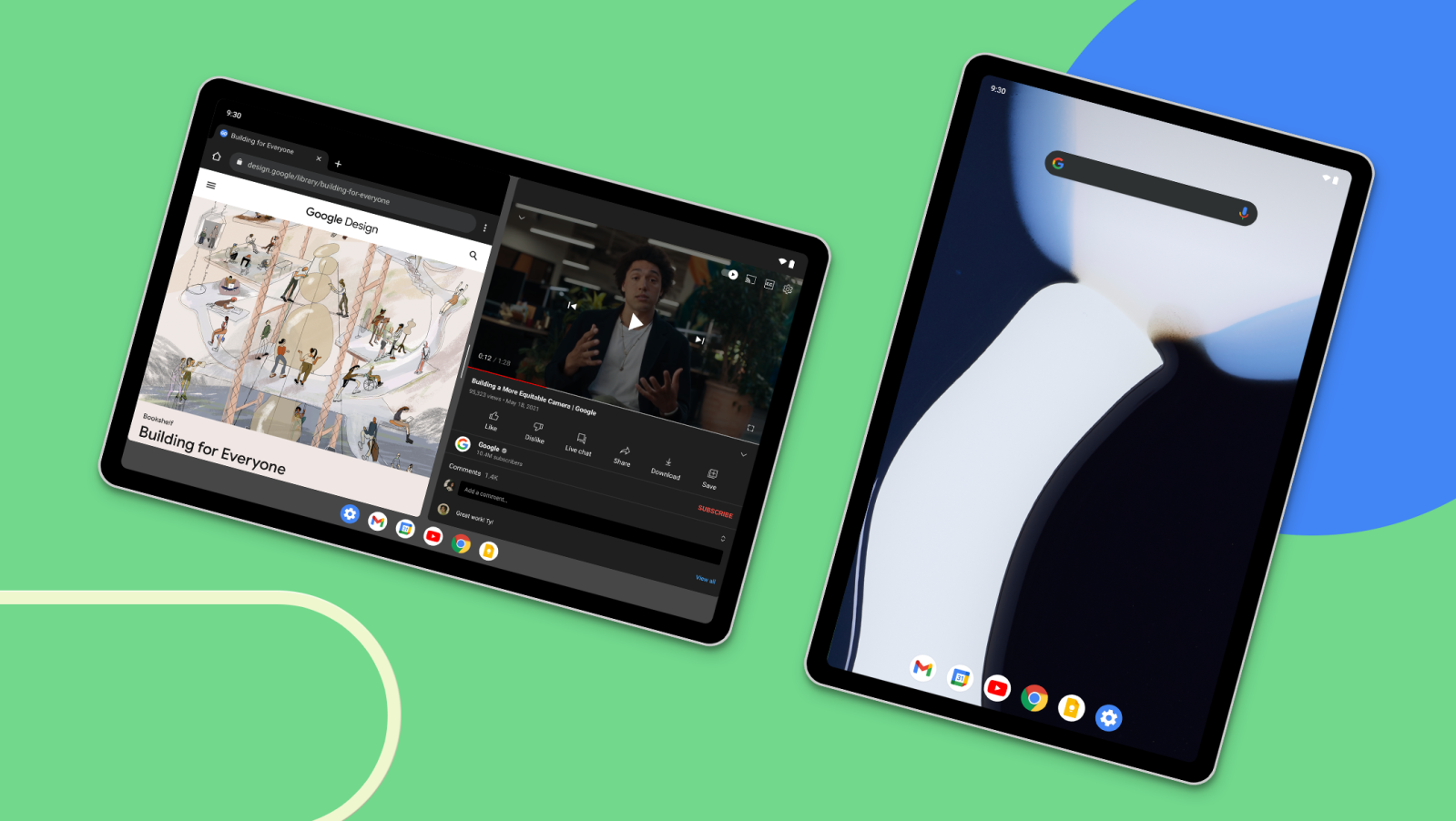 Back in October, Google announced Android 12L as an unexpected “special feature drop” to improve the OS on tablets and foldables devices. After one 12L developer preview and three betas, this next release of Android — officially version 12.1 — is launching for Pixel phones alongside the March Feature Drop, while Google detailed what’s coming for tablets and foldables.

Compared to Android 12 in October, 12L makes a number of usability improvements with a handful of new animations, including a pulsing when using the under-display fingerprint sensor on the Pixel 6. Speaking of the lockscreen, those that are quite upset with the big Material You clock when there are no notifications can now disable it from Settings > Display > Lock screen > Double-line clock. The time will then always appear in the top-left corner.

On the homescreen, long-pressing reveals a new quick wallpaper picker that shows your current and last four backgrounds. Tapping on one immediately updates your wallpaper with a flashy animation. At a Glance also gets a small update where tapping the day/date once again opens Google Calendar. It’s a bit hard to not accidentally launch Google Weather, and your best bet is tapping the numeral. Lastly, when opening an app’s Widgets menu, the sheet now takes up the full page.

Android 12L makes a handful of tweaks to Quick Settings. The “Internet” (which gets a “Turn off airplane mode” shortcut) and “Screen record” tiles are no longer docked to the bottom/top of the screen, but instead are centered. There’s also a delightful animation where the Power menu expands out of and contracts into the button at the bottom of the QS row.

In the Recents multitasking menu, “Split screen” is now called “Split top” and sees the app windows get a more prominent divider and curvature. Elsewhere, various UI elements – including “Sound & vibration” and “Unblock device camera/microphone” – have been updated with better Material You spacing and new buttons.

In addition to the changes introduced by Android 12L, this month also coincides with the March Feature Drop for Pixel phones.

On tablets and foldables, Android 12L adds a taskbar (up to six apps) to quickly initiate split-screen and switch between applications when multitasking:

You can also drag-and-drop any app from the taskbar to enter split-screen mode so you can do two things at once. You can watch a YouTube video while you scan the news, or search for accommodations for an upcoming trip in a Chrome browser while you view its location in Google Maps.

The Recents screen also gets a grid view, while there’s a two-column layout for the lockscreen and notifications. This is meant to “give you more space to view and swipe away your notifications.” The Quick Settings toggles (or clock) appear at the left and notifications to the right.

The Settings app and other parts of Android are also getting tablet and foldable optimizations. On the homescreen, the search field in some configurations might appear in the dock alongside the row of apps.

When setting up a new device, you’ll also be able to see more information with a two-column layout. And, you’ll be able to make changes to features in your Settings without having to go in and out of each section. Let’s say you’re looking to change the wallpaper on your device — select “Wallpaper & style” from the navigation panel and make your pick on the side, all in one view.

Samsung, Lenovo, and Microsoft are planning to release Android 12L updates for their tablets and foldables “starting later this year.” Google commits to adding “more features and functionalities to help you make the most of your larger screen devices in Android 13 and beyond.”

The Android 12L launch starts today for the Pixel 3a, Pixel 3a XL, Pixel 4, Pixel 4 XL, Pixel 4a, Pixel 4a 5G, Pixel 5, and Pixel 5a. It’s rolling out to the Pixel 6 and Pixel 6 Pro later this month. Visit Settings > System > System update and tap “Check for update” if the OTA hasn’t already appeared on your device.