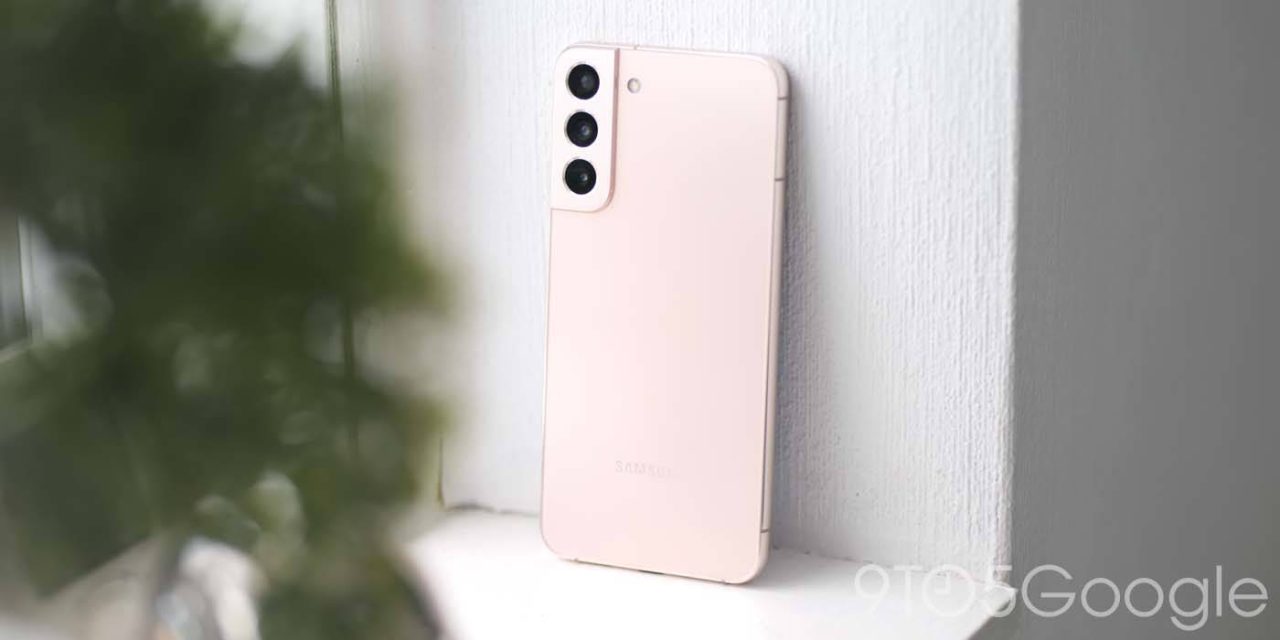 While plaudits flowed for the Galaxy S22 Ultra — and rightly so — the Galaxy S22+ might be the best of the latest Samsung lineup due to its mix of form and feature set. With that in mind, this is our long-term review of the Galaxy S22+.

It has been almost three months since the Galaxy S22 series hit shelves and online stores across the globe. Having lived with the device since that time, just what have we learned and what are the pitfalls and positive notes on the middle device in the S22 lineup?

Samsung has refined and honed the Galaxy lineup to such an extent that it’s simply hard to fault the fit and finish of any recent flagship device from the firm. The Galaxy S22+ is absolutely no exception. Sure, it looks very similar to its predecessor, but given that the S21 was such a unique device, the refinements result in an even better design.

I don’t like completely flat sides on a phone, so while the Galaxy S22+ has sharper corners than on any previous S-series flagship, the slight curvature is a welcome reprieve from that “digging” feeling that I find incredibly uncomfortable on the likes of the iPhone series. It’s a minor change that makes a big difference and has ensured I haven’t felt actual pain in the long-term period that I used the Galaxy S22+ for the purposes of this review.

That’s a big deal given this is still a “big” phone in the traditional sense. That said, Samsung has maximized space usage on this tall chassis to great effect. There’s also a reassuring heft that is somewhat confusing given the Galaxy S22+ is a svelte piece of hardware. I’m often using it with a case, but the “Pink Gold” color is so striking that I opted to pick up a clear case simply to admire the soft hues that are sorely lacking on many flagship phone. Kudos to Samsung to offering up some delectable color options yet again this year.

While I would ordinarily be disappointed that this nearly $1,000 phone does not ship with a QHD+ display, because I tend to set the resolution down to conserve battery, FHD+ is a fine compromise when a screen looks this darn good. The uniform bezels are a particular highlight and something I have missed since ditching the Pixel 5 some eight months ago. The fact that it is completely flat is yet another huge bonus here, as it’s simply the best screen on Android as far as I’m concerned.

At 6.6 inches and with a genuine sliver of bezel on show, it’s a true edge-to-edge experience that elevates content above much of the competition. Throw in that super slick 120Hz refresh rate and I must say I often find it hard to switch over to other review units as the Galaxy S22+ display has spoiled me since launch.

Sunny days are not something we see all that often in the UK, but even if the weather threatens a good time, the Galaxy S22+ display handles even direct sunlight with aplomb. The new Extra Brightness feature has come in especially handy when trying to view on-screen content when in direct sunlight.

Pair that exquisite display with similarly excellent speakers and it’s a recipe for on-the-go entertainment that very few smartphones can match. Rather than connect to my Nest Hub or another smart speaker, I’ll just set the volume to max and listen to podcasts or stream music from Tidal when I’m reading or cooking and it’s something I wouldn’t ordinarily do with other devices. The super-fast fingerprint scanner and crisp haptics are just another set of reasons I love interacting with the Galaxy S22+ on a daily basis.

One UI has come a long way over the past few years and it’s certainly what I would consider the perfect foil to Google’s vision of Android. I’m not completely converted as I still like to use a third-party launcher for the home screen but I can easily see why millions around the globe love Samsung’s software flavor.

One UI 4.1 is stuffed full of little extras that I’ll miss when switching back to my trusty Pixel 6, including the awesome Smart Widgets that stack atop one another and save the need for multiple home screens dedicated to tracking the weather, my calendars, and more.

I have also liked returning to simple Quick Settings toggles for things like Wi-Fi connections. Just tapping once to enable or disable was something I found incredibly frustrating in the Pixel version of Android 12 which has an annoying floating pop-up that requires a couple of presses to do the same. Hopefully, Samsung sticks with this method with One UI 5.0.

Each and every month, receiving a prompt OTA notification informing that the latest security patch is available is also something you never truly tire of. That said, Samsung’s installation process needs some serious work as yet again there are no seamless updates on the S22 series.

The only potential gripe I have had is the usage of the Exynos 2200 in my European variant of the Galaxy S22+. Sure, it’s fine for everyday use but there are some noticeable performance dips compared to the OnePlus 10 Pro when gaming. That’s even with the supposedly ray-tracing capable Xclipse 920 GPU tucked neatly inside. Even after using the phone for a few months, there are practically zero games supporting the feature and with marginally lower framerates, it’s a step behind.

Everywhere else is super slick and smooth and given that the Exynos 2200 ranks higher than the Tensor chip in the Pixel 6 Pro, I’m not worried about the day-to-day performance even though it would have been nice to get the Qualcomm Snapdragon 8 Gen 1 model for a little extra under-the-hood grunt.

If I were to hold on to the Galaxy S22+ in the long term, then the RAM Plus feature is something I think will certainly help longevity, but currently, 8GB of RAM has been more than enough to keep my device ticking over nicely.

The Galaxy S22+ shares a lot in common with the Pixel 6 Pro camera setup but I haven’t been quite as happy as with Google’s latest flagship in the stills department. That’s not to say that the S22+ camera capabilities are inferior, because that is simply not true. It stacks up well with the best in the business and at least in terms of functions and features available far outstrip the Pixel 6 series.

Every photo looks sharp and detailed. There’s still a slight punch that has been toned down in recent years. I love how vivid images look without wandering into the realm of technicolor nightmare — an older trait that lured me away from Samsung phones originally.

As my colleague Ben Schoon noted in his initial review, the shutter lag is the biggest sore point of the S22+. Unless you truly stand still you introduce the risk of blurry end results. This isn’t a problem most of the time but it can be frustrating especially when I’ve become accustomed to Google’s point-click-and-done camera approach. It’s also a little more frustrating as focusing in most cases is fast and accurate.

Samsung’s Portrait mode could very well be the best on any phone to date now. The edge detection has improved substantially to the point that I prefer it over the Pixel 6 when adding fake bokeh. You can tune the blur amount down to the point that it looks really natural in a way that I think other cameras stumble with.

The only major criticism of the Galaxy S22+ camera setup for me has been the somewhat lacking telephoto zoom lens. It’s a 3x optical zoom lens that is fine, but it’s not a true periscope zoom lens and that means that while it’s fine for minor crops, you’ll notice drops in details when zooming in past 5x. I’m not even sure why Samsung didn’t put a periscope zoom lens into this device to better compete with the likes of the Pixel 6 Pro, as it wouldn’t have added a huge premium.

Lifespan is an area which can make or break a smartphone and although the Galaxy S22+ hasn’t quite been a battery beast, at least in my experience, it’s a dependable companion even when pushed beyond my usual usage patterns — as I did throughout my long-term review.

Sure, at 4,500mAh it isn’t the biggest internal cell but whether it’s the slightly lower res FHD+ display or just Samsung’s ability to do more with less, it manages admirably. Due to the lack of an in-the-box charger, I have simply used Google’s 30W USB-C charger and that tops up the phone in under a couple of hours.

What’s annoying is that the 45W charger is extortionate at a further $50. I just charge first thing at my desk to mitigate the slow charging with non-official accessories as there is no reason that a first-party charger should be so expensive.

In my opinion, the only major weakness with the Galaxy S22+, when compared with other flagship-level smartphones, is the seemingly inflated asking price. Because it sits below the Galaxy S22 Ultra, it may at first appear like a huge step down, when in actual fact it’s not all that different.

The Pixel 6 Pro is a fantastic alternative but for an extra $100 on the base price of Google’s current latest flagship, you get a far better update promise and what you could argue is a more reliable everyday companion.

Due to those factors, Samsung’s middle smartphone in the lineup is probably going to be the one that most people should consider. As I’ve mentioned, it does not feel too far behind the S22 Ultra and even has a few benefits like a flat-screen and more pocketable size. Given that the Ultra is all but a Galaxy Note in name, this feels more like the “true” S22 model in most ways.

For most people that might be enough to look the way of the Galaxy S22+. If there is one thing you take away from this long-term review of the Galaxy S22+, it should be this: Should you want what amounts to a solid smartphone which — with updates — will last for upwards of four years, then this is one to look at picking up.