Pixel 6a vs. Nothing Phone (1): Clean Android, unclear winner [Video] 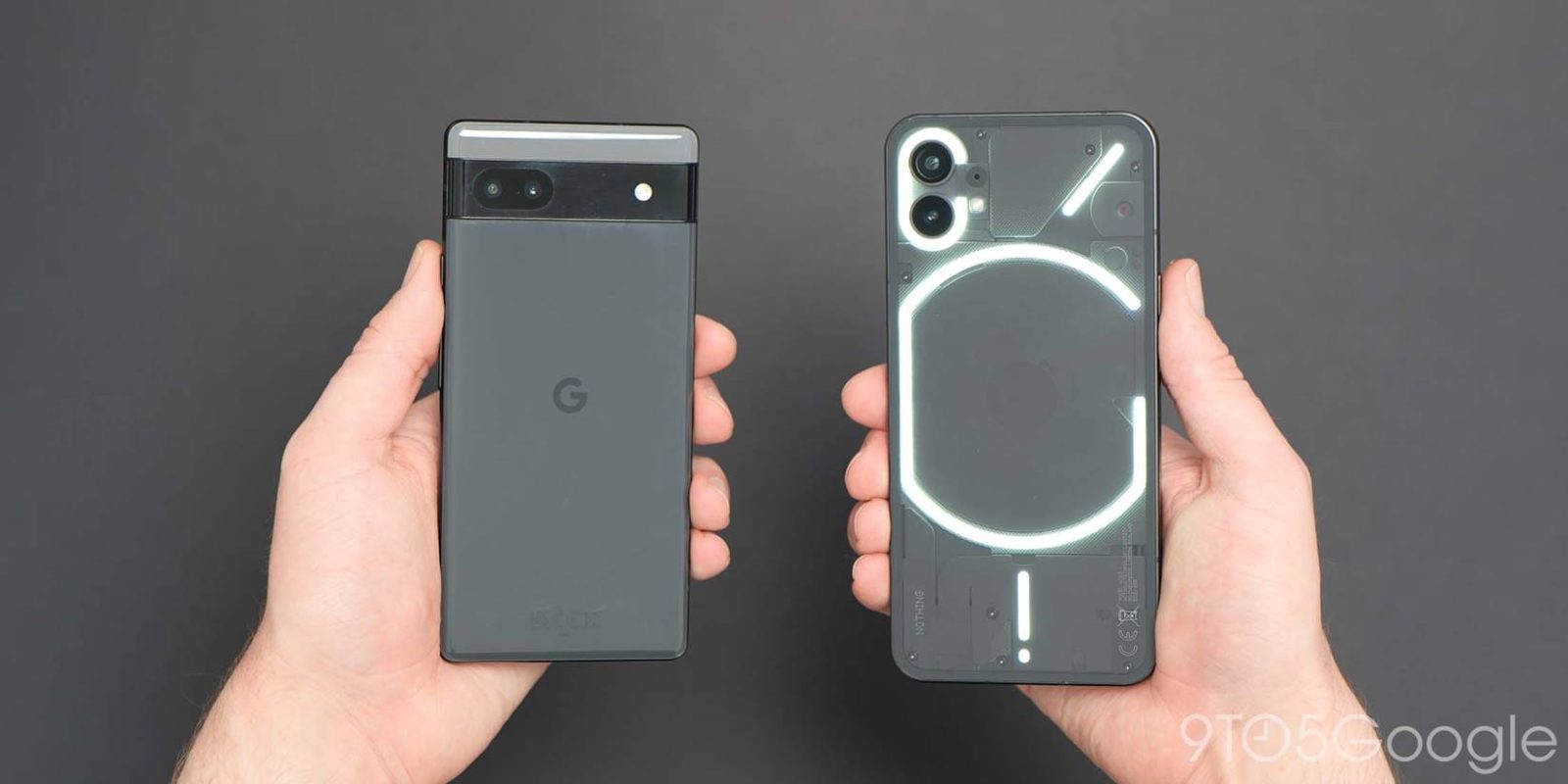 In selected regions, the Pixel 6a has tough competition from devices like the Nothing Phone (1). Just how does Google’s latest mid-ranger compare? Here’s just where it stacks up.

While there are many high-quality affordable Android phones littering the global market, you might live in an area where options are more limited. The Pixel 6a officially launched on July 21 and has since gone up for pre-order. Meanwhile, the Nothing Phone (1) is Carl Pei’s first smartphone launch post OnePlus.

Although ahead of time, there were rumors that the first Nothing device would launch as an out-and-out flagship, it has come to market with modest specifications and some unique lighting tricks. The sub-$500 pricing pulls the $449 Pixel 6a into orbit by virtue of the software similarities and release timeframes. Which is the better buy? Here’s everything you need to know.

Side-by-side, and it’s very easy to shift your focus or attention towards Nothing’s only smartphone release to date. It’s certainly a striking device that borrows selected design traits from Apple but adds a little bit of intrigue, courtesy of the clear backplate and the eye-searing Glyph lighting. The materials are certainly what we’d consider “premium” given it’s an inexpensive Android.

The Pixel 6a is intriguing in its own way courtesy of the black camera bar and dual-tone colors, but it’s smaller and lighter thanks to a polycarbonate build. Of course, the screen size is quite a lot smaller at 6.1inches. That’s not all, as there is a substantial difference in the refresh rates and display quality.

Phone (1) has a 6.55-inch OLED display with a smooth 120Hz refresh rate. It also has uniform bezels on all sides – something that the Pixel 6a lacks – even with slim bezels on all sides of its own screen. Google’s usage of Gorilla Glass 3 is somewhat of a disappointment given the screen is scratch-prone, while the Phone (1) utilizes Gorilla Glass 6 for protection. You’ll be pleased to hear that both phones come with flat panels, which is great for a gesture-based interface.

The internals are certainly a mixed bag but Google’s flagship Tensor processor is definitely the standout that propels the Pixel 6a above the Nothing Phone (1) at least in terms of power. When you start to compare the other internals, like the base RAM allocation and the maximum storage capacity, Nothing’s first smartphone looks like a more enticing prospect.

Google also offers the Pixel 6a in more colors than Nothing provides with the Phone (1). Alongside a Sage and Charcoal, the 6a is available in Chalk. Meanwhile, the Phone (1) is available in black and white versions, with both including Glyph-lighting LED strips at the rear.

Google’s version of Android is not the most feature-rich and because Nothing has opted to build upon AOSP, there are a lot of major similarities between Nothing OS and Android 12 on Pixel. Telling these two versions of Android 12 apart is actually quite difficult if you have no experience with either software build.

Phone (1) comes with unique tweaks to areas like the Quick Settings panel with two persistent toggles for Bluetooth and Internet settings. Material You is also here, and your entire device UI is themed based upon the colors and tones within your wallpaper. It isn’t quite as extensive on the Nothing Phone (1) as on the Pixel 6a. You won’t get colored lockscreen widgets, but it fits the bill if you do not like extensive tweaks – the kind often found in many OEM skins.

The Pixel 6a is stuffed with a number of features that rely heavily upon the Google Tensor processor. Live translation, Google Assistant Voice typing, and a growing number of Pixel Feature Drop additions are all par for the course on Pixel. The Phone (1) has a lot of the same core functionality, but includes a number of its own exclusive features. Most of these are tied to the Glyph lighting strips at the rear of the device for notifications and even the rear camera. Nothing OS 1.1.0 comes with some NFT tracker widgets, Tesla Quick Settings controls, and it has software-based Face Unlock baked in.

Distinct differences in Android 12 on the Pixel 6a and Nothing Phone (1) boil down to the more powerful Tensor processor and how on-device tasks are handled. A big difference is in the long-term support on offer.

You’ll get the same number of OS upgrades, with the duo both expected to be supported up to and including Android 15. Google, though, is offering five full years of regular monthly security patches, while Nothing is providing 4 years of bi-monthly security updates. Because of that, the lifespan certainly favors the Pixel 6a.

At 4,410mAh and 4,500mAh respectively, there isn’t a huge difference in capacities on both devices. One would expect the smaller 60Hz screen on the Pixel 6a to offer longer daily lifespans but this doesn’t appear to be the case. You can expect a full day from each device but veer into heavy usage like gaming and you may struggle.

Because the Nothing Phone (1) uses a modified Snapdragon 778G+ processor, 15W Qi wireless and 5W reverse wireless charging are available when ordinarily it is not with such a chipset. Charging speeds are across the board far greater than that of the Pixel 6a, with its fairly basic 18W wired charging. It is worth noting that a charger is not provided with either device. On top of that, to access 33W wired charging speed, you’ll need a Quick Charge 4.0 compatible power brick.

If you want or prioritize a high-resolution camera setup, the Nothing Phone (1) delivers two 50-megapixel rear camera sensors. Understandably, given the price, the Pixel 6a doesn’t include the impressive 50-megapixel sensor you’ll find on the regular Pixel 6. Instead, the almost ancient Sony IMX 363 sensor is wheeled out once again, but with four years of software tuning, it’s still capable.

The Phone (1) camera hardware is better across all three sensors: main wide, ultrawide, and selfie camera. Although the exceptional software tuning and post-processing of the Pixel 6a means it not only competes – in most scenarios, it comes out on top.

Toss in a number of Tensor-backed features like Real Tone for accurate skin tone exposure, Face Unblur, Live HDR+ video, plus 4K UHD at up to 60fps, and it puts the Phone (1)’s camera capabilities in the shade. It’s still a solid setup that includes a full Expert Mode, something that the Pixel series complete lacks. The Glyph-lighting also lets you access diffused lights without needing a bright, harsh LED flash.

Nothing has stuck to simple camera features, and the most common options are catered to including Portrait Mode, long-exposure Night Modes, plus a macro option with the ultrawide. 4K UHD video is capped at 30fps, while HDR recording modes are limited to just 1080p.

Pixel 6a vs. Nothing Phone (1): Which should you choose?

There’s a lot to like about the Pixel 6a and the Nothing Phone (1). For most, the clean Android software will be a key component that elevates the duo above even many other more specification-heavy devices. It is worth noting that you can get more for your money if you care about raw specifications over design and daily experience. A prime example is the Poco F4, but you’ll need to live in a region where the Xiaomi phone is sold.

That is the crux of the problem when talking about affordable Android smartphones, if you live in an area where you can access the multitude of great cheap phones from the likes of Oppo, Xiaomi, OnePlus, and many more, then the Nothing Phone (1) and Pixel 6a could seem particularly underwhelming.

However, there is more to a smartphone than just the internals. If you like Android as Google intends, then this duo represents a great way to get a clean flavor without the associated price tag. Alternatively, we’d suggest just looking that the Google Pixel 6. At $599, it’s a better overall buy in almost all areas.

You can pick up the Pixel 6a from the Google Store, Amazon, Best Buy, Verizon, T-Mobile, and AT&T for $449 off contract. The Nothing Phone (1) is available from limited European retailers but can be bought from Amazon UK at £399 if you are desperate to import to the US — something we’d advise against.