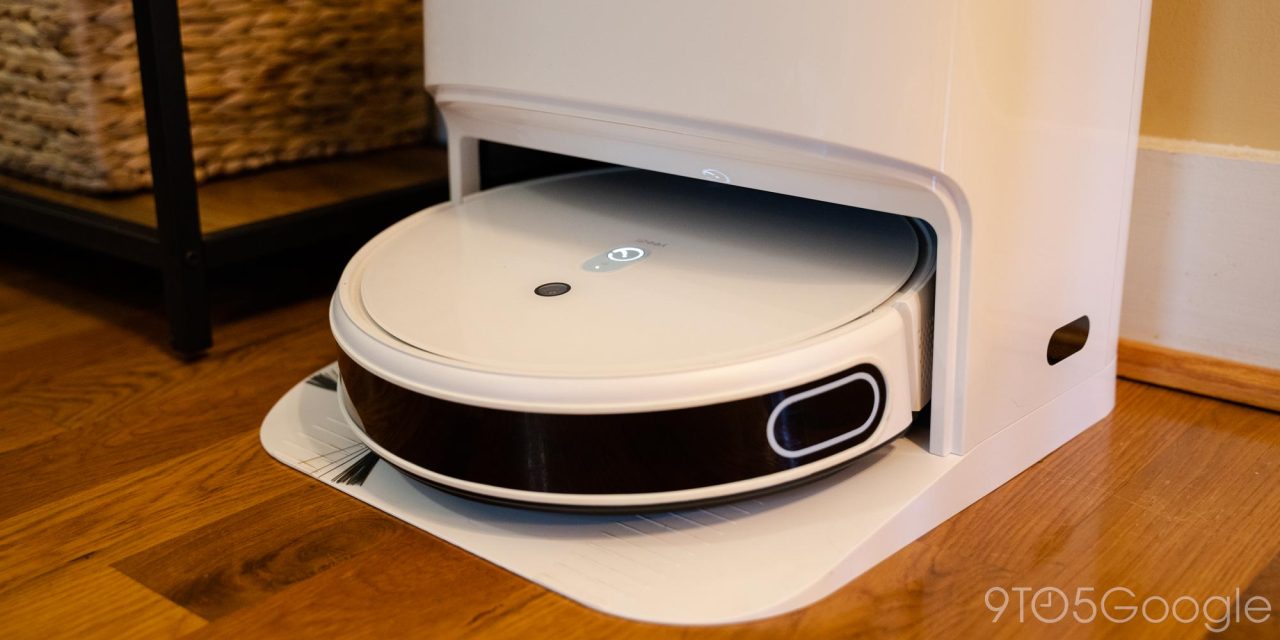 Robot vacuums are incredibly common nowadays, and often times they now include the ability to also mop your floor. But these combined cleaners often end up doing one job well, or both jobs somewhat poorly. Lately, I’ve been using the Vac 2 Pro and Mop Station Pro from Yeedi, which are two devices that really set their sights on doing one job well, and the latter is one that really opened my eyes to how these robots can really keep the home clean.

The Yeedi Mop Station Pro is a robot vacuum that focuses more on the mopping side of the equation. The core of the product is a robot that has a vacuum attachment and a mopping attachment. The former will suck up hair and dust with 3000Pa of suction and hold enough debris to clean a few rooms in my experience. Even with tons of pet hair, the vacuum attachment had enough space in the dustbin to not require emptying during the process.

But the mopping attachment is the more interesting of the two.

It has a vacuum and a small dustbin, yes, but it focuses on giving your floors a deeper cleaning through its mops which are mounted to the back of the system. These mopping pads spin around as the robot navigates your home to give an effective scrub, and they hold water to really clean the floor. The entire robot then goes back to its large docking station which automatically cleans the mopping pads and exchanges the water using a reservoir of clean water and a dumping bin of waste water.

I’ve been testing out this system over the past few weeks, and I’ve been very impressed to date. My house is exclusively hard flooring with a couple of area rugs, and I always thought I was getting an effective cleaning with other robot vacuums and their basic mops. But the amount of extra dirt the Yeedi Mop Station Pro picked up on each run shocked me – to be honest it was a bit disgusting, really. The waste water bin was immediately full of cloudy brown water, but my floors were left mostly spotless. Some tougher spots, like in the kitchen, just need the stronger pressure of your own elbow grease, but if you think your existing robot vacuum with a built-in mop is really getting the job done, I’d bet you’re wrong.

Through my testing thus far, I’ve found that mopping pads need to be exchanged around once a week – you can reuse them after cleaning in the washing machine – and the waste water needs to be emptied at least twice a week when running the system daily. The clean water tank might need to be filled every other day, depending on the size of your home. In my case, the Yeedi Mop Station Pro is cleaning around 1,200 sqft, give or take, and taking care of the dust and dirt that comes from owning two dogs.

There are, of course, some negatives too. The station, for one, is huge. It also produces a lot of ambient noise when using the air drying function. And really, you need to clean out the station at least once a week, otherwise it gets super gross and could potentially start building up mold if you leave it for too long – it’s dark and wet in there, so this is crucial to not forget about.

But the key part of the equation here is that you’ll still need something to vacuum. The Yeedi Mop Station Pro can only pick up a very small amount of dust and pet hair when it is in “vacuum and mopping mode.” I’d have to empty that bin constantly if it were my only vacuum, so I actually tend to leave that task to a Yeedi Vac 2 Pro that the company also sent out for this review.

Our Damien Wilde has spent more time with that machine and will have another entry in our Google Home Essentials series on it soon.

The short story, though, is that the Vac 2 Pro has done a brilliant job of picking up hair and debris in my house over the past few weeks. Even with two dogs constantly shedding (and their friends coming over regularly to blanket the floors even more), it’s held up well both in effectively cleaning the floors as well as emptying itself at its docking station. Where other auto-empty docks I’ve had have run into clogs up to once a week, I’ve only had two minor clogs on this system over the past several weeks. The station relies on bags for emptying, which I don’t consider ideal, but a single bag lasts the better part of a month in my experience, and (unofficial) refills aren’t too expensive.

What really had my attention, as mentioned, was just how well these two systems work together. Using a vacuum and a mostly dedicated mop from the same brand opens up a lot of possibilities. Looking at Yeedi’s offer, the company’s app allows users to direct the machines to prioritize rooms. While this is a little tricky given these two products come up with very different maps, it allowed me to run the vacuum earlier in the morning and have the mop follow behind it for a deeper cleaning, and even tell each which room they should do first. You could probably replicate a similar system when mixing brands using Google Assistant routines and their built-in delay options, but it was nice to have the option within the same app when using both of Yeedi’s products.

Of course, you can ignore much of this advice if your house has a lot of carpet. The Yeedi Vac 2 Pro works well on my thinner Ruggable carpets, but the Mop Station Pro has a lot of trouble with the edges of the carpet, and also has no way of keeping carpets dry if it happens to run over them. That’s unlike the Roborock S7, for example, which can lift its mopping pad when it encounters carpet.

On a similar note, Yeedi also touts “3D obstacle avoidance” on the Vac 2 Pro. On that machine, I did find that it would get stuck on blankets or wires far less often than the Mop Station Pro, which lacks that feature.

Like everything else in our Google Home Essentials series, Yeddi’s cleaners support Google Assistant for commands and show up in the Home app, and they work rather well in this regard.

You can add Yeedi vacuums to routines or manually ask the Assistant to have them start cleaning.  If you ask them to clean a specific room, the vacuum will do as it’s told, but that’s where the map in the app becomes a little less ideal. Because it didn’t recognize the main part of my home as multiple rooms, it cleans a huge area when I say “living room.” Plus, the lack of an option to manually name a room means you have to remember what each one is called – I have to ask the robot to clean my “study” even though it’s actually my office.

But hey, this is still better than a lot of other robot vacuums that work with Assistant.

As for the Google Home app, you’ll have fewer options, with just a start/stop and dock button available, but you can also use these products with Google Home Routines, and the new options for device triggers open up a world of possibilities with how you can have these run.

The big thing I want most people to take away from this is that these automated floor cleaners don’t have to be an all-in-one system, and it might be better if they aren’t. Having one machine focused on sucking up dust, hair, and other debris and another focused on a deeper mopping has really shown its worth to me, and I’m not sure I’d go back to a system that tries to do both at once.

Yeedi isn’t the only brand that offers this sort of solution, but it is a rather affordable way of doing so. The setup I’ve been testing out costs around $1,300 at retail, but is often on sale and can easily drop under $1,000 at times. It’s still a hefty price to pay, but it’s not much more, and can be less, than some robot vacuums that try to do both of these jobs in a single machine.