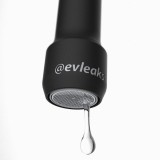 Verizon Wireless is reaching back into cellphone history for its next foray into prepaid, dusting off last year’s LG Optimus L3 and renaming it the Optimus Zone (model number: LGVS410PP). A new name alone won’t improve the specs on this strictly-entry-level device, however, with the Gingerbread-powered (you read that right) slate offering up a 3.2-inch QVGA display, 800MHz processor, 3.15-megapixel camera, and not much else. Look for the revived Zone to sell for just north of free by the end of the month. HTC One pictured in red The HTC One is a gorgeous phone — even without the Lumia-esque colors, it’s still one one of the most attractive handsets on the market. It should really be no surprise, then, that HTC plans to expand the current color palette of, um, two, to encompass a brighter range of hues. This is the red version of that device — you may remember HTC accidentally posted a similar render when the One was first announced.

We would expect a slew of differently-colored Ones to hit the market as a way to keep the phone fresh; check out this post for some possible color schemes, although a two-tone design seems unlikely. For the best looking One, you’ll still need to shell out for some Colorware action. It should come as little surprise to industry observers that Facebook plans to unveil both a rich, skinned version of its Android app at a press event tomorrow, along with the first hardware to run that experience out of the box. The phone, by HTC, is appropriately named “First”—appropriate because of its status as the première phone to undergo Facebookification and its similarity to the name of HTC’s newest flagship, the One. More screenshots follow: END_OF_DOCUMENT_TOKEN_TO_BE_REPLACED