[Deal] Throw a 200GB SanDisk MicroSD card in your Android phone for $63, today only

Amazon is having a big Gold Box on much of its storage but the standout is the SanDisk Ultra 200GB MicroSD with 100MB/second transfer rate for $62.99 shipped. That’s 25% off and the lowest price we’ve seen on this card which gets impressive 4.5/5 star reviews from Amazon customers. Check out the whole sale for more including the 256GB monster.

Today Western Digital and SanDisk launched the “world’s highest-capacity microSD card” with an incredible 400GB of storage. That’s double the previous record held by SanDisk. With more devices supporting larger external storage than ever before, SanDisk is looking to meet the ever increasing demands of users with today’s announcement. For example, many of LG’s flagship devices would in theory support upwards of 2TB, if needed.

Western Digital claims that it was able to achieve this larger capacity by developing a new proprietary technology and design. But that’s naturally going to come with a high price tag.

END_OF_DOCUMENT_TOKEN_TO_BE_REPLACED

Electric vehicle battery cost falls to $132 per kWh, but it might go up from there

Porsche Taycan GTS sedan first drive: Getting to the track is half the fun

The Atlas Wristband can discern between different fitness activities 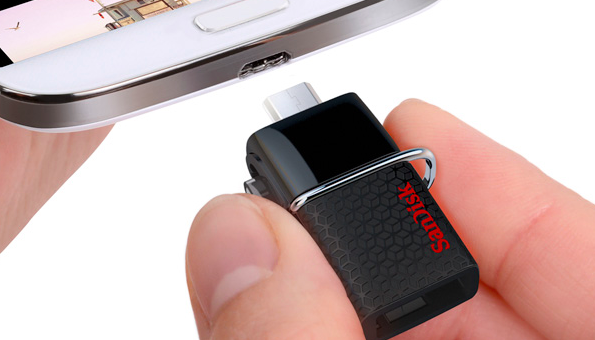 As part of its CES announcements kicking off today, SanDisk revealed its new, faster Ultra Dual USB Drive 3.0 with micro-USB for use with Android devices as well as PC and Mac computers. END_OF_DOCUMENT_TOKEN_TO_BE_REPLACED At Mobile World Congress in Barcelona, SanDisk has just announced a new accessory that will make many Android users very happy. The company has unveiled the world’s first ever 128GB microSD card. More specifically, the card uses the microSDXC standard, meaning that it works with devices only that are compatible with XC, not just the lower-end HC.

SanDisk does note, however, that the card is “designed for Android” and will be fully compatible with many Android devices. In addition to this new 128GB card, SanDisk will also be updating its “Memory Zone” app for Android, which allows users to easily and access files stored on microSD cards. The app also allows users to back up content to it and free-up internal device memory. A new “OptiMem” will automatically transfer older photos on a device to external memory.

The availability of 128GB microSD cards also signals that we could soon start seeing Android devices with 128GB of internal storage. This would be a big upgrade, especially when the operating system on many devices takes up more than 6GB of space.

The 128GB SanDisk microSD card will run $199.99 when it is released. The card will be available exclusively from Amazon and BestBuy.